6 members of the French upper-middle class find that their best-laid plans to dine together are repeatedly and frustratingly scuppered, whether it be due to misunderstanding over the date, French army officers inviting themselves to their meal or suddenly getting arrested. Some of the most bizarre scenarios are revealed to be dream sequences in Luis Buñuel's Oscar winner of Best foreign film. 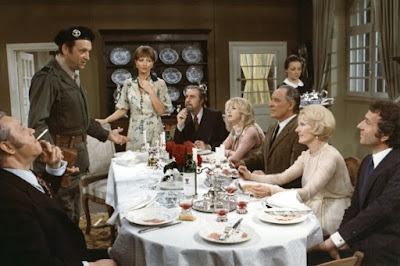 From the outset, the characters at the centre of Le Charme discret de la bourgeoisie are an attractive, urbane bunch, who converse on the finer things in life are of good scruples. But the audience's perceptions are quickly shattered. One casually deals drugs whilst bedding his mate's missus. A couple, the Sénéchals, shimmy out of the window to have sex in the garden whilst ignoring their guests.

Buñuel obviously had a rollicking good time exposing the false dichotomy between the bourgeois and the proletariat that they so smugly like to compare themselves to, and for the most part, his film is enthralling to follow. A little more clarity of focus might have rendered this a more complete watch; some of the dream sequences are nested within dreams of other characters, but finding this out merely adds to the confusion rather than answering any narrative questions.

It's highly probable that the many and varied sequences in Le Charme discret de la bourgeoisie wasn't supposed to make sense to the audience, and that the true interpretation of the movie is to be teased out on repeat viewings. If the watcher is to be merely amused and entertained,  then, Buñuel has certainly accomplished his goal. He sends the middle class up with far more flair and nuance than he poked fun of Christianity in La Voie lactée, not least because the vignettes in that film depicted characters that felt strawman-ish, whereas in Charme discret the funny parts are generally underscored by truth.

Surreal touches pepper the film. Fernando Rey (Tristana, That Obscure Object of Desire) is a diplomat for a fictional south American country, the Republic of Miranda, but, like the equally fabricated TV towns of Pawnee in Parks and Rec and Agrestic in Weeds, the country is evoked with such detail when characters discuss it, that the audience could easily believe it were a real place. A maid, played by an actress who couldn't be a day over 30, nonchalantly declares she's in her 50s, and no-one bats an eyelid. And, when hearing his wife is in his best friend's bedroom, the culprit coolly tells him to go wait in his car, and his missus will be out later.

In between displays of the director's signature playful dramatic irony, Le Charme discret de la bourgeoisie juxtaposes some disturbing imagery. These arresting scenes of corpses haunting various people now look a tad outdated by 21st century cinema's tendency to depict gore on a hyper-realistic level, but it's because they're so out of the blue and jarring with the rest of the film's comedic tone that they manage to retain power.

Overall, Le Charme discret de la bourgeoisie should be approached with caution; its wacky exposition and unconcern with tying up the plot won't be to everyone's tastes. But if you stick with it, it's a truly surprising movie, that will tickle and unnerve you in equal measure, and as a thesis on the power of dreams, it's a hell of a lot more gripping than Christopher Nolan's overrated Inception.