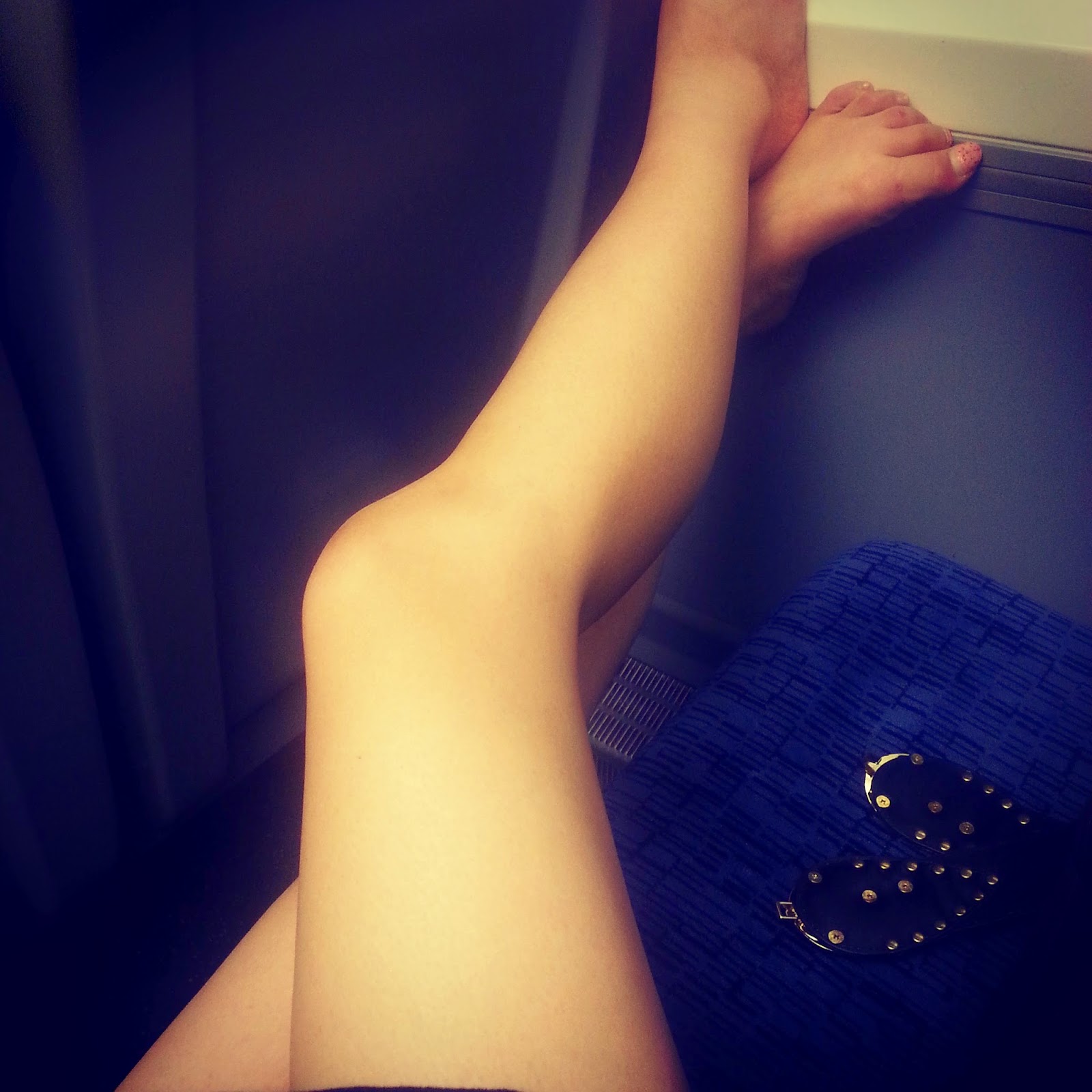 Having worked at my firm for a year now, I've developed a particular style during the Spring/Summer months: skirts and dresses, usually paired with a waist belt and a funky pair of tights/stockings. Here are a couple of the pairs I've been rocking in recent weeks, and my thoughts on them.

Below: all from Primark

Sadly the middle pair is with me no more, as, just after two wears + washes, it had too many rips and ladders, which says it all about the durability really. However, I loved the elastic gusset top of the hold-up, and generally prefer wearing hold-ups as it puts less pressure on my stomach and means I can get away with eating a carbier lunch. The only thing you have to be careful with when wearing hold-ups is for the skirt not to be too short, otherwise you'll constantly feel self-conscious.

In terms of longevity, the floral wool tights on the left have lasted the best, and the Mickey Mouse fashion tights on the far right, as you can see, haven't fared quite so well, being made from much flimsier material.

Below: all from Marks and Spencer 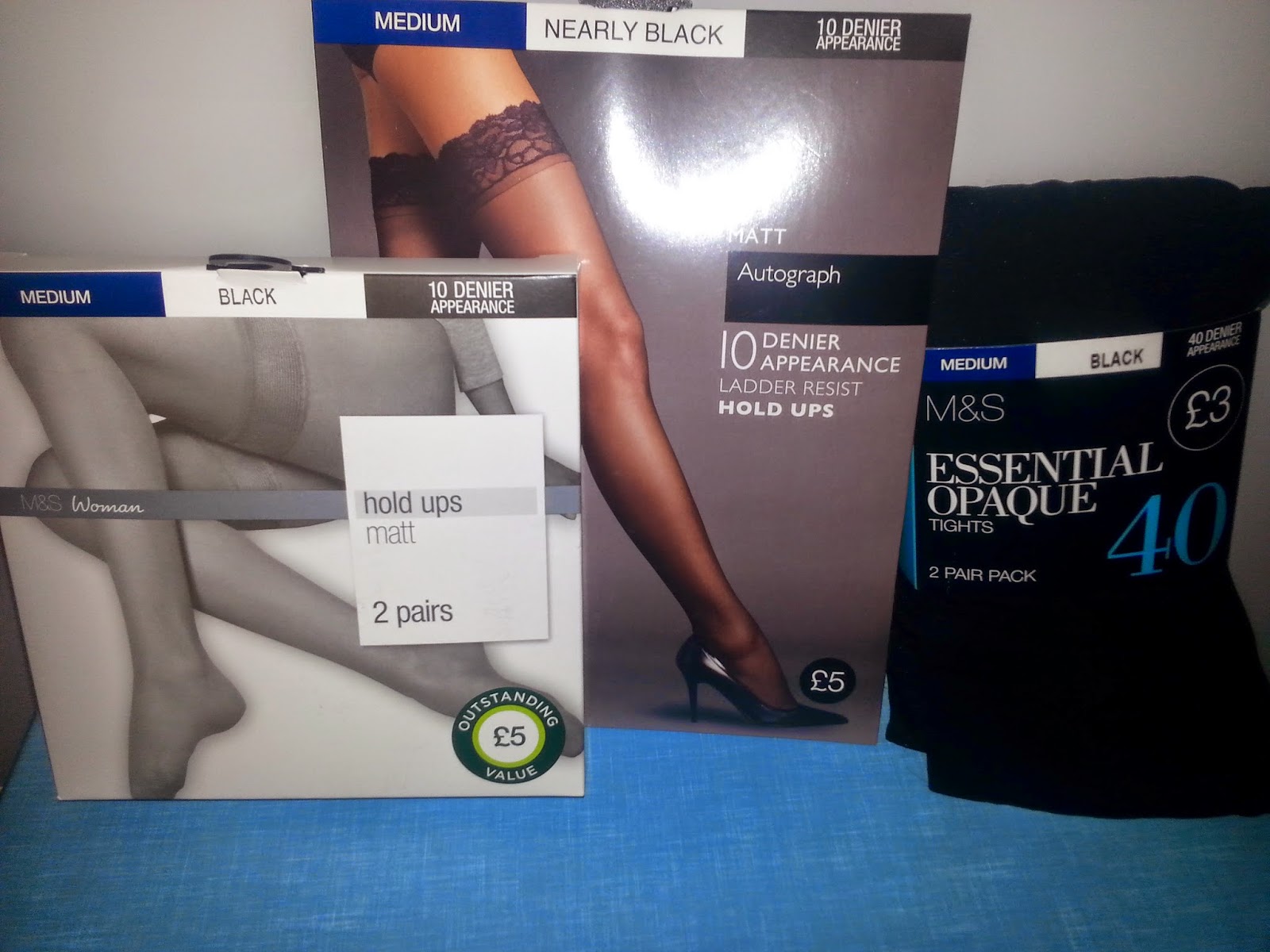 The 2 pairs for £5 hold-ups are pretty crappy quality, and the elastic gusset top's hold isn't firm enough for my liking either. The hold ups in the middle are a dream! here they are on: 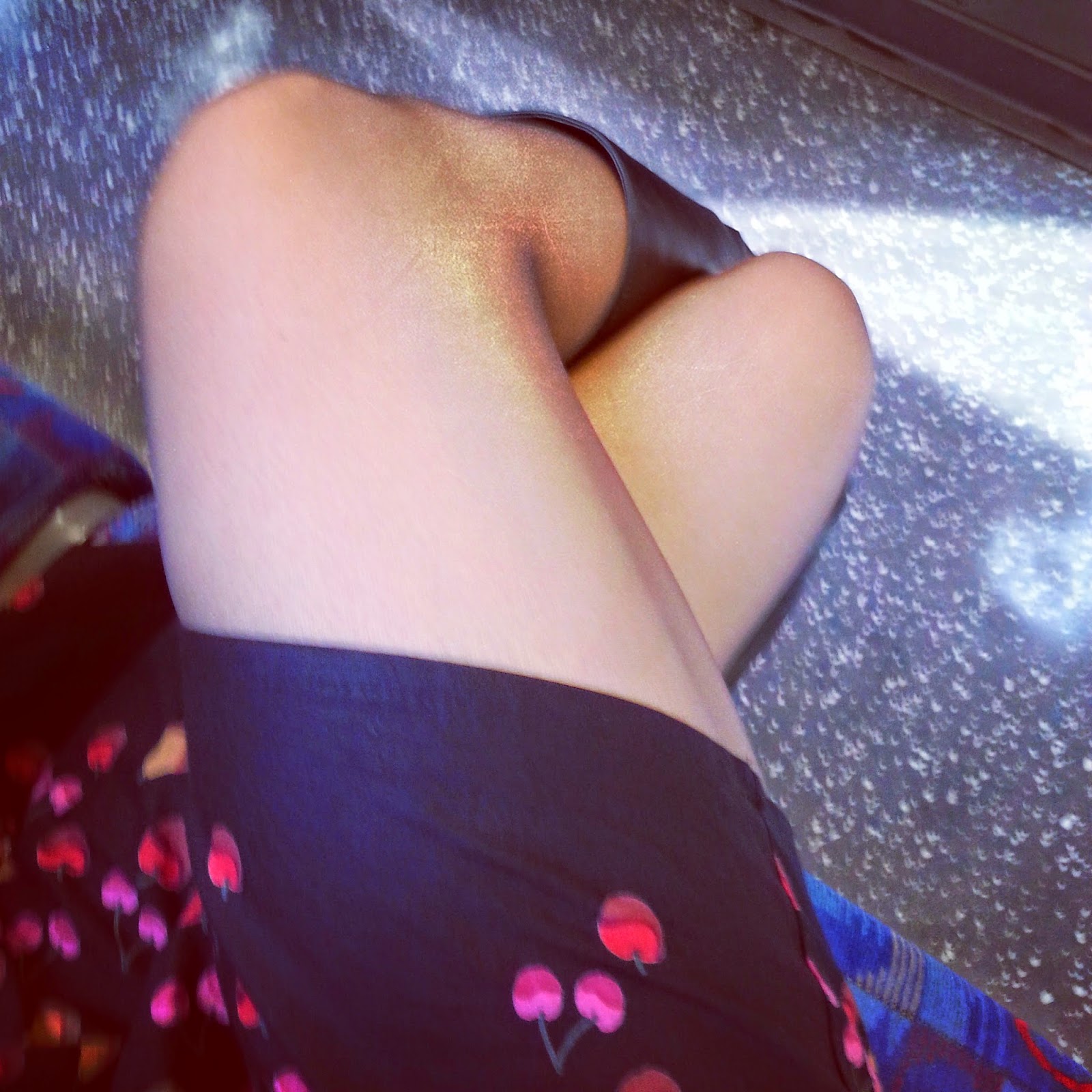 The colour is a great compromise between nude and black, and so far they are yet to ladder or tear.

Below: from TK Maxx 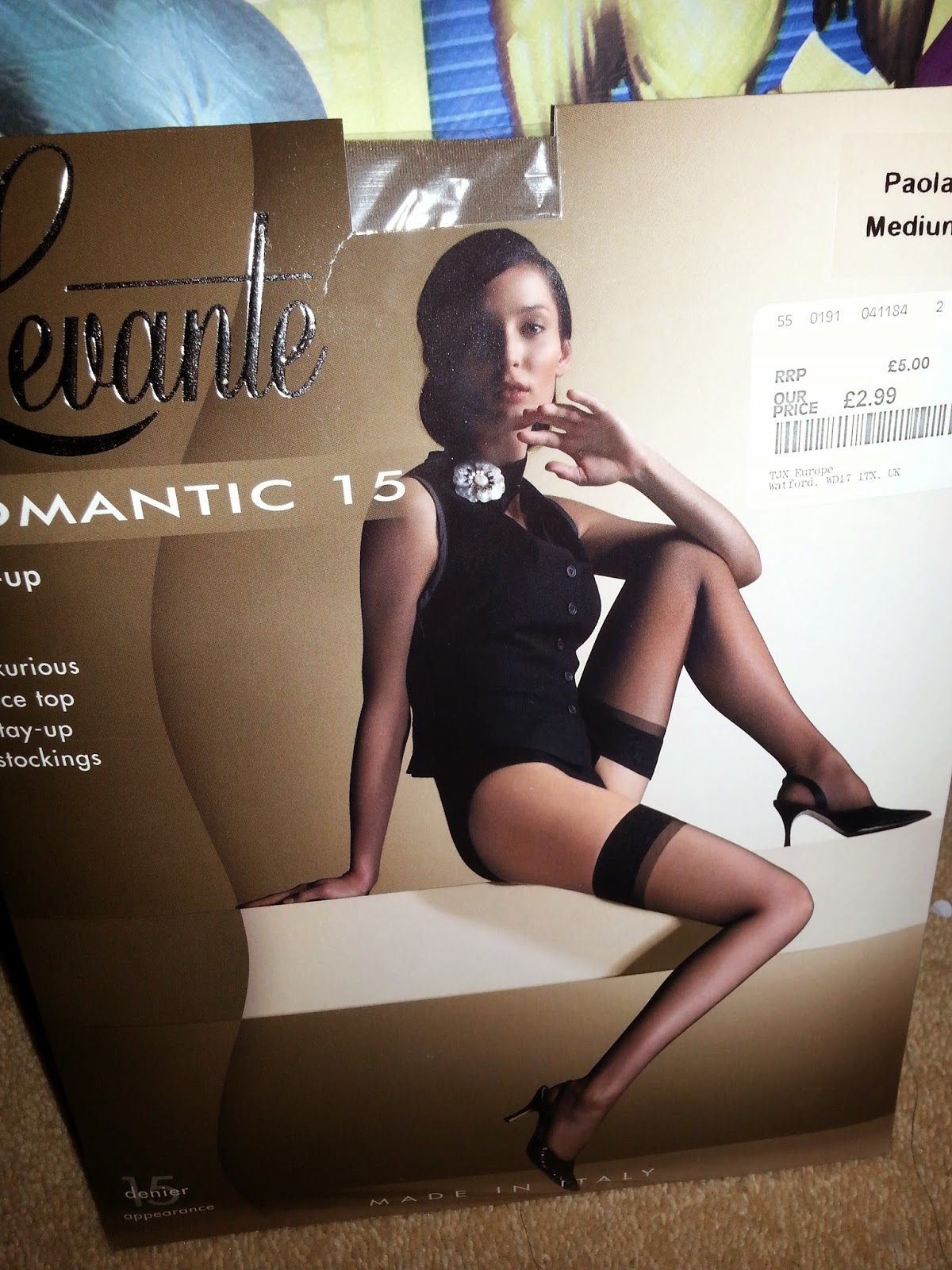 Despite the lady on the cover, these are actually nude coloured stockings. The quality of the stocking itself is fine, however the elastic part at the top tore a hole in itself which is frustrating, but not the end of the world, as this part is covered by the hem of the skirt. 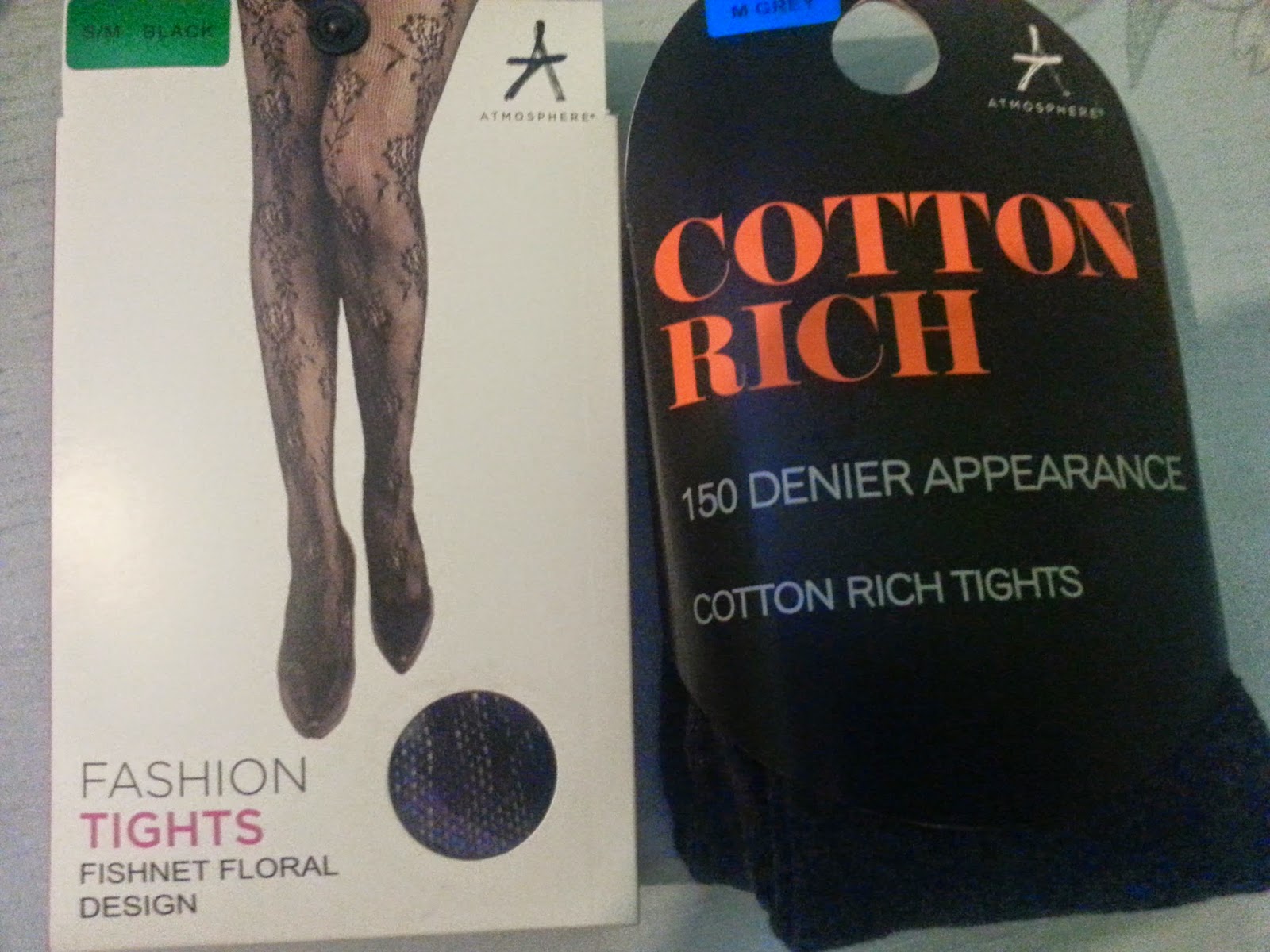 The floral fishnets look kinda tacky on the packaging, but I absolutely love them on! 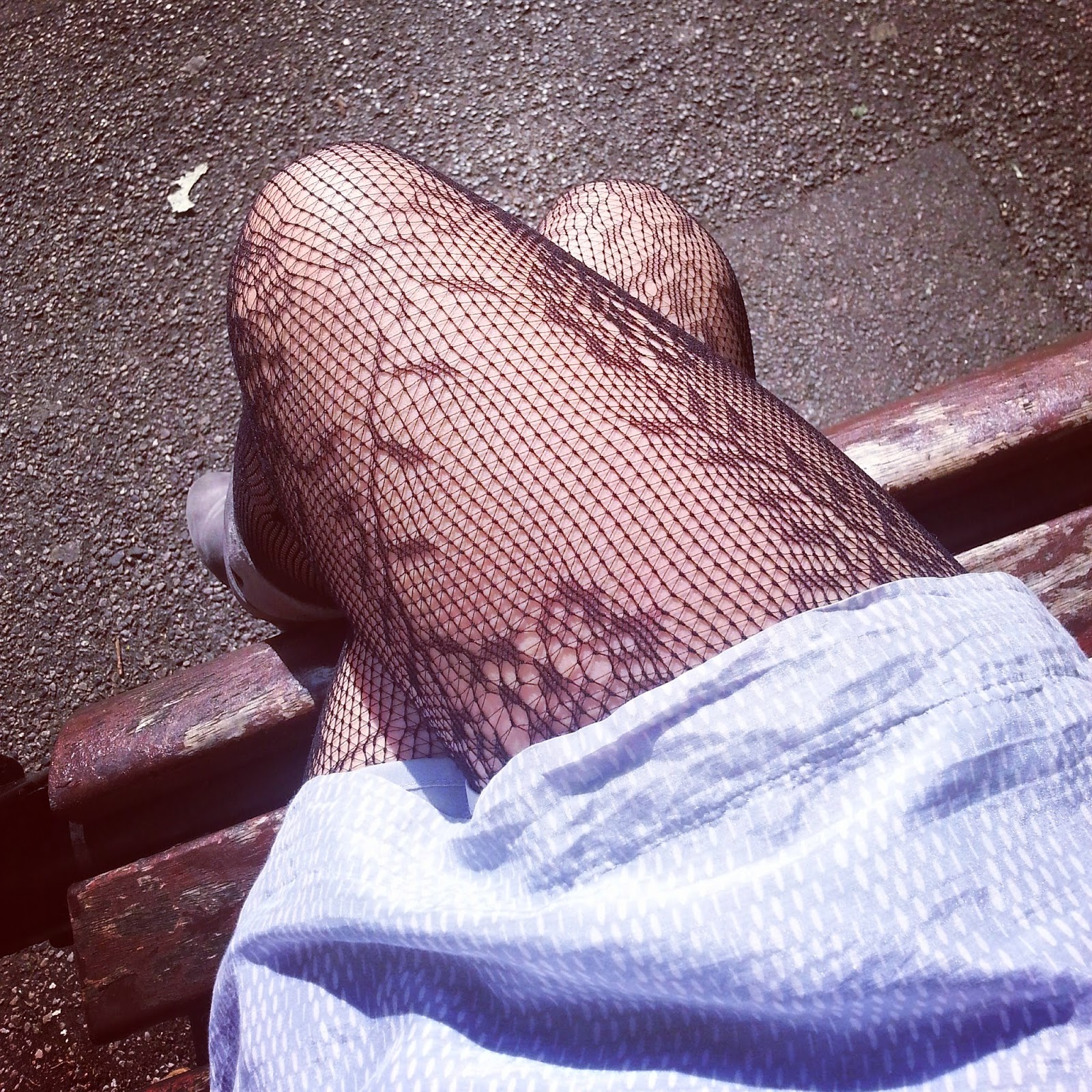 Stylish and sexy, you also don't have to worry about laddering due to the way the tights are made. The thick wool tights last long, but give a bit too much coverage on warmer days.
Posted by Emma at 6/21/2014 01:23:00 pm 1 comment: 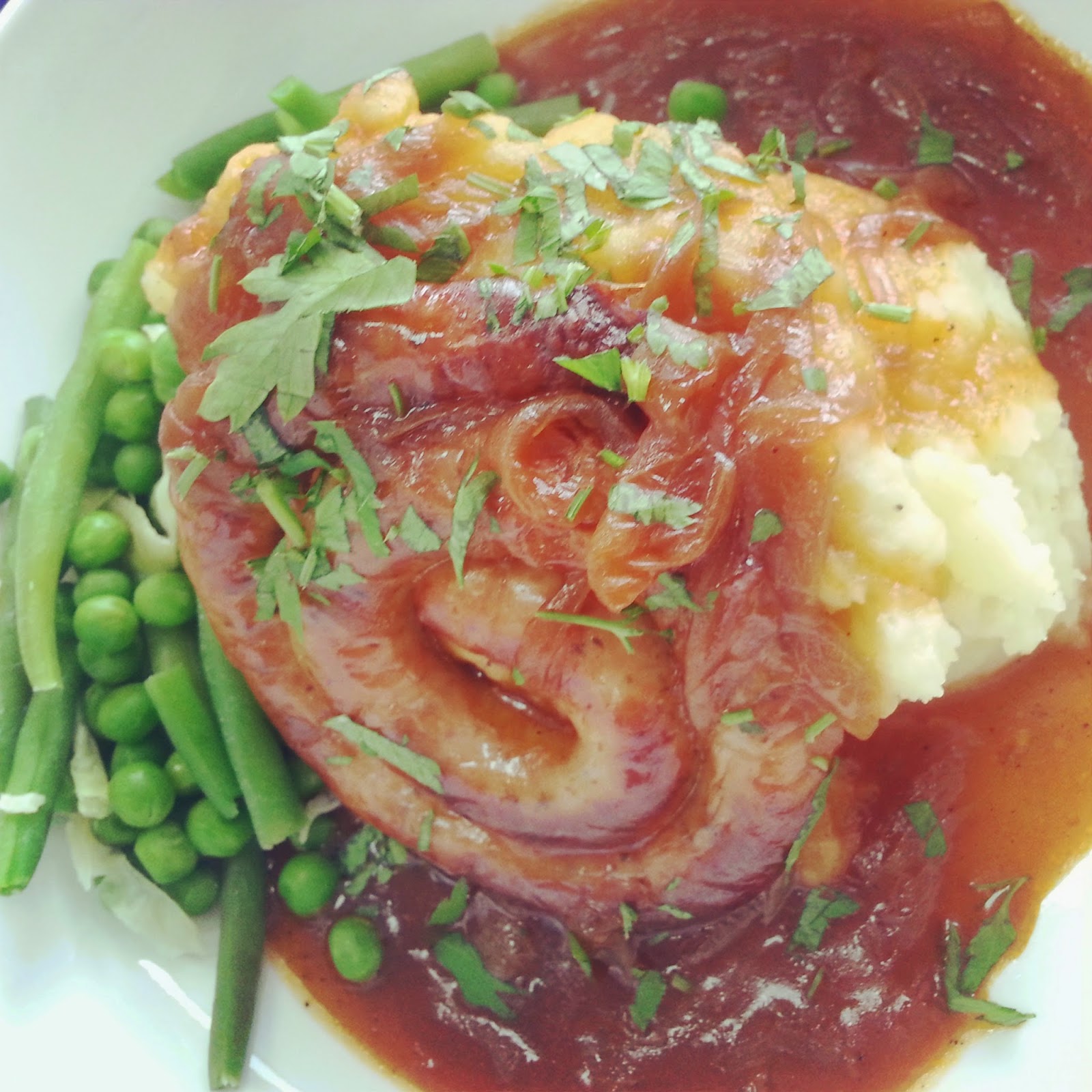 How is it June already? Somehow, 5 months of the year have already passed by. For me, it's been lost in a flurry of deadlines, work, and countless boozing.

Now, I like to mark my #seasonsoflove with songs to associate certain memories with. So, here are some songs I've been listening to religiously in the past month (mostly whilst dithering about with coursework).

Most RnB songs have a girl singing the lyrics and a male doing the rapping. In "Problem", we have girls on both. I love the playful spirit and sax loop of this song, and Iggy's Jay-Z reference in her verse makes my life.

Too Much (Spice Girls)

Not my favourite all-time Spice Girls song (that changes between "Say You'll Be There" and "Stop" depending on my mood), but, lyrics-wise, this resonated with me perfectly in the month of May. Much in the same vein as "Problem", it's got the whole I wish I knew how to quit you thing going on. Which I definitely feel for certain fellas.

Can't Remember to Forget You (Shakira ft Rihanna)
I'm not sure as to the veracity of this rumour, but I heard jealous hubby Gerard Pique put a ban on his missus having males in her music videos? As such, we have more girl/girl duets from her, rendering this the third song on my list about wanting to give up a bloke, no mata how difficult (sensing a theme here?) On her album, Shakira also covers this song in Spanish, which I like to listen to to practice my linguistic skills. #multitaskingBITCH

Timber (Pitbull ft Ke$ha)
Hurrah, a song not about men!! I'm not actually too sure what this song is about, mind, but it has an annoyingly infectious beat that makes up for its nonsensical lyrics ("face down, booty up", poetry, that). I also happened to duet on this on my birthday karaoke, singing the Ke$ha bit. I did not do the high notes any justice, really.

TUNE. If there's one song I'm going to remember Summer 2014 by, it's going to be this insanely swaggerous, effortlessly cool from Iggy and our very own Charli XCX. The song is an ode to the high life, so whilst it's how the other 5% do live, and thus not something I'd be particularly knowledgeable about, you have a hell of a good time singing along about it. Hertfordshire-born Charli XCX is my new girl crush, she just has Je ne sais quoin, and the Clueless-inspired music video is great fun. The chorus is catchy as hell, and the machine-gun-rapping by Iggy Azalea is too ace. Champagne spilling, you should taste that.

Right, that's five. For June, in the theme of numbers, I shall list the six songs I was obsessed with this month. Plot spoiler: Fancy will probably still be on there.
Posted by Emma at 6/01/2014 08:44:00 pm No comments:

Review of some magazine freebies

I got the May/June editions of Company, Cosmopolitan and Marie Claire. Two of them had Elle Fanning and Elizabeth Olsen, two of my favourite working young actresses in, and I fancied the look of the freebies that came with the other. As the three freebies were all above the quality of the usual chocolate bar/malfunctioning mascara that you usually get, I thought I’d give my thoughts on them.

Nail polish:
- The turquoise one is not a particularly flattering shade, and will be relegated to the back of my nail polish drawer. - The peach one, however, is utterly adorable. I’ve been wearing it with a sparkly pink topcoat on my finger and toenails and it’s a perfect pastel look for the Summer, especially given I have sparkly pink flip-flops as well. LOVE.

Nip + Fab Dry Leg Fix:
Having ‘shiny legs’ is somewhat of an obsession of mine, especially during the Summer, and given that this is a product devoted solely to that, I was enamoured immediately.
The smell is minty, but not obtrusively so, and application is easy: just squirt out as much as you require and spread on your legs.
It is very effective, and one application will keep my legs smooth for a whole day. Love this product; wish there was more of it to go around!

Aromatherapy Associates face products:
- Still yet to use the cleanser
- The Face Mask is lovely; it hydrates your face without feeling too ‘sticky’ like other face masks. Application and removal are also extremely simple.
- Moisturiser: wonderful, worked wonders on my face when my skin was going through a dry patch! Again, I just wish there was more of it!
Posted by Emma at 6/01/2014 05:25:00 pm 1 comment: