Last night marked the return of two shows I have a passing interest in - Skins, and The Secret Diary of a Call Girl. Whilst there may, on the surface of it, seem to be very little in common between a show about the hedonistic lives led by some Bristol teenagers and a London prostitute, the shows are not without their similarities; both featuring bar-hopping, bed-hopping, and characters I feel compelled to watch, even if, like the Amy Winehouse song, I know that they're no good.

s. It centred on Thomas, who, following an incident in a nightclub where a drug-addled trip gets a girl to commit suicide, is left feeling guilty and in an existential crisis. After a terribly awkward sex scene with his one-time wholesome, now completely randy girlfriend Pandora, he turns his attentions to the daughter of his vicar, whom has a penchant for singing and an even bigger fancy for shagging in hospitals. The characters in this episode were that their whininest, moodiest, most loathable peak and aside from JJ's cameo and the bombastic appearance of Effy at the end (I hate her but she has certainly got a swagger about her), it was a pointless episode. Things had better pick up next week.

Secret Diary of a Call Girl took itself much less seriously, and was more fun with it. Billie Piper's Belle/Hannah finds her memoirs published, and, in an amusing episode where she attends the launch of her book (published anonymously), she is horrified to find that the publishers have employed a brainless, big-boobed half-brain to read her book. In the second episode, she has to make do with her sister living with her, and it's repression vs. liberals as the two sisters bicker away continuously, building up to a timebomb (or a bitchslap) just waiting to happen. The customers of Belle are, as ever, pretty munting, but the show does manage the same stream of misleading "prostitution is fun guys, join in!" that the book gave.

From a young age, Tiana has learnt from her tireless father the meaning of working hard for your dreams. His dream was always to own a restaurant, but sadly, he died before his dream true. Spurred on by this, Tiana holds down two jobs to raise funds so she can build this restaurant in her dad's memory. 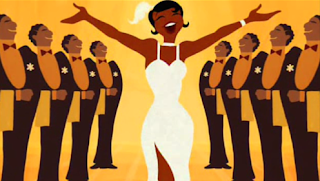 Just as she has the exact amount she needs, on the eve of catering for a welcoming party held by her best friend Charlotte to welcome Prince Neevan, Prince Neevan goes and gets himself transformed into a frog by local voodoo man, and she, on the promise of riches if she does so, kisses him. However, this backfires and only goes to turn her into a frog. And being an amphibian is the least of her worries.

As you'd expect from a Disney movie, no matter how modern, there are catchy ditties aplenty in The Princess and the Frog. Fine vocal performances feature all round to make the songs truly unforgettable, my favourite songs being the poignant "I'm Almost There" and a very sweet "My Belle Evangeline", as sung by a hillbilly firefly. It shouldn't work, but it really does.

Um, yeah, so, remind me why I'm straight again?

Saw this in White City, outside the BBC studios and it made me chuckle: