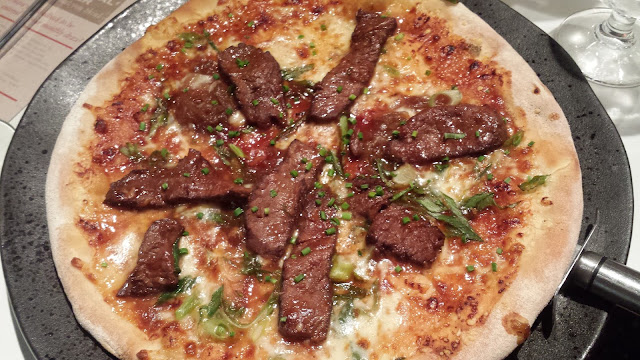 (I'm making my way through the backlog of pizza places I've visited in the last few months, but not yet made the time to review!)

The deal which was on offer at Fire and Stone was £20 for two pizzas and a pitcher of Pimm's, which would have been rude to decline, given that most of the pizzas retail at above £10; the one above cost £13.50 on the menu.

The pizza above, The Texas, paled in comparison to the dizzying heights of Franco Manca's sourdough pizza, and I think that offering to put steak on a pizza is a little ambitious. I love pizza, and I love steak, but to do both well, you have to work twice as hard, an unfeasibly high bar to set for the poor cooking staff, who, as expected, fell short.

That said, even if the meat wasn't the best, I liked the thin base and usage of spring onions, caramelised red onions and chives, but, as you can see from the photo above, all were employed a little sparingly. I would have liked more veg, less meat on my pizza, but I'll let it off, given that they were elevated by a strong BBQ taste.

In terms of layout of the restaurant, Fire and Stone compares very favourably to its central London peers, which cram you in. The cavernous setting of Fire and Stone meant you were not at risk of treading on anyone's toes, and could enjoy your meal without having to listen to adjacent tables' conversations. Furthermore, the lighting level at this place was optimal: not Hollister-levels of pitch blackness, but not so bright you feel you're being blinded by the lights.

Overall, it's hard to argue with a deal where you get a pitcher of Pimm's and two pizzas, but I found Fire and Stone's pizza flavours, all inspired by cities, a tad gimmicky, and in the Texas case, didn't completely lift off. I'll more than happily try some of the other cities (London looks interesting), but I feel a little less variety and a little more quality would have suited their pizzas better.