Someone to Gripe to.

I watched the moving Chinese drama Someone to Talk to on Saturday, and whilst I enjoyed it very much, that didn't stop me from being a pedantic git about precedence the BBFC have set in the past with regards to one of the classification issues of the film. Hence, I sent the BBFC my second email of the year (they must love me).

Spoilers for Someone to Talk to and Two Days, One Night under the cut. Fair warning!

Suicide attempt at 12A and 15
I’m writing with regards to SOMEONE TO TALK TO, a Mandarin language drama I watched at the weekend, rated 12A for moderate language, suicide attempt and references.

In this film, there is a scene where a woman drinks pesticide in an attempt to take her own life. I was wondering why this was rated 12A when there was a similar scene in 2014’s TWO DAYS, ONE NIGHT, albeit with Xanax rather than pesticide, which was rated 15.

Many thanks for taking to the time to read and respond to my email.


I don't actually feel too strongly about the fact that Someone to Talk to should  be a 15, as I've always said I felt Two Days, One Night was a fairly tame 15-rated movie. But I just like consistency. Either both films should have been rated 12A, or both should have been 15.

To add clout to this argument, the Irish film board (who I'm becoming increasingly obsessed with), rated Someone to Talk to a 15A, the identical rating they gave Two Days, One Night. They get it; if you're gonna be strict about suicide attempts, you have to be strict across the board. 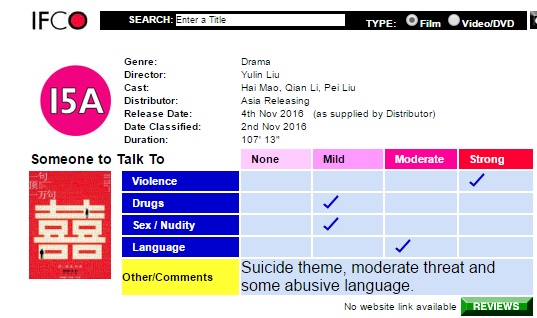 Also, they showed a creepy trailer for Miss Peregrine's Home for Peculiar Children before the U-rated Finding Dory and I didn't email them about that.