OOTD: Icco's with my Asian homie.

Icco's pizzas are perfection. This is what I wore to dine there for roughly the 20th time in 2015 with my mate Kieran: 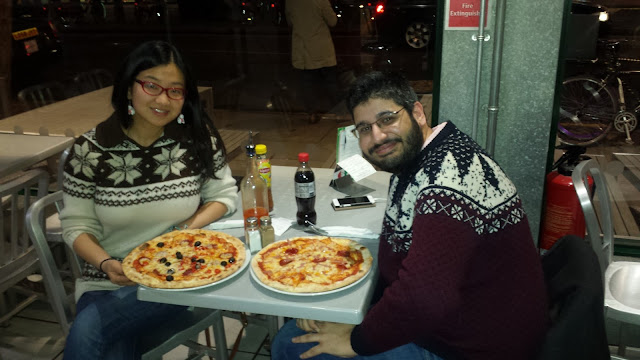 I was in my local secondhand DVD store, and saw this on the back of the DVD for True Romance: 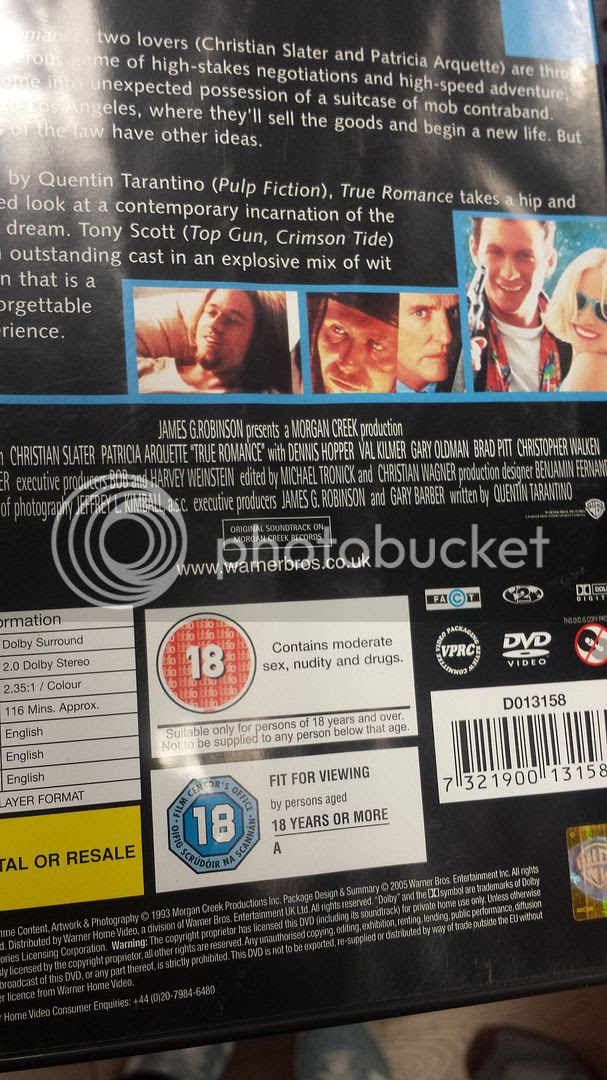 True Romance was re-released in the UK last month, and when a film is re-released, it gets re-rated by the BBFC. Often it will retain its original rating, but with modern sensibilities, it's not unusual for the rating to change (it usually goes down). However, in the case of True Romance, which was given an 18 when it first came out over here in 1994, it retained its 18 certificate, for many reasons, the chief one being strong bloody violence. Which is, as you can tell, is completely different from that pictured on the DVD.

However, you don't have to be a BBFC obsessive like me to smell fish. As I've previously mentioned on here in my lengthy analysis's of why movies get certified what, films these days have to be pretty hardcore to get an 18 certificate. So the consumer information for an 18 just would not contain the word 'moderate' anywhere. So not only is the photographed DVD a pirate, but a bad pirate.

And it's all thanks to my obsession with film certifications that I spotted it!

So hurry down the chimney tonight!


In case you were wondering what the writer of this crappy blog sounds like... enjoy!

And if you wanted to hear an actually decent cover of Santa Baby, this duet by my girl Ariana and Liz Gillies is the epitome of 'sultry'. 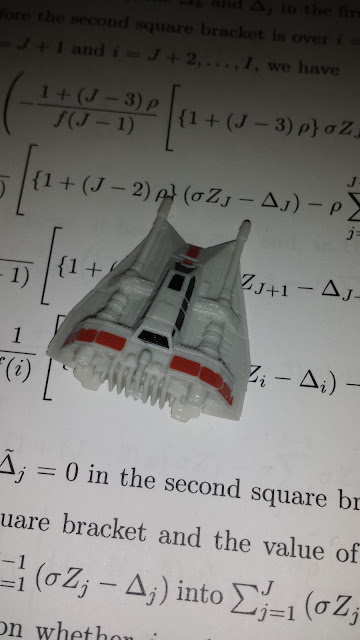 As with The Breakfast Club just a few streets down, The Table Cafe boasts a no-reservation policy and as such, has a queue of people waiting outside in the freezing cold. That, already, puts it in a realm with 10 Greek Street, which irritates me because it automatically signals that the restaurant cares more about their overall revenue than they do about the dining experience of the punters.

The food itself was OK, but nothing special. I had a coke float which was very sloppy indeed - by the time the waitress set it down on my table, half of it had spiked onto the table. Classy. To eat, I had the Borough Full English breakfast, which, whilst tasty, at £12.50, was just an overpriced, over-decorated version of English breakfasts I can get on my high street for £5.99. The menu boasts: 'two fried eggs, bacon, pork and leek sausages, slow-cooked Borough baked beans, grilled tomato, herb mushrooms and toast'. Well, firstly, I couldn't taste any 'leek' in the sausages (which were horrendously burnt), secondly, no-one's fooled by that lazy smearing of pesto over the tomatoes in an attempt to look fancy and the 'herb mushrooms'? Have a look at the picture, judge for yourself: 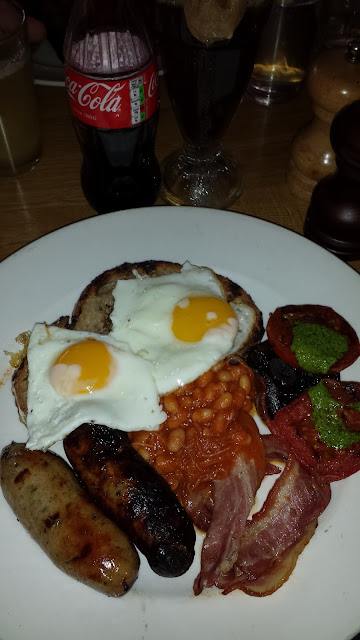 Furthermore, for twice the price I'm used to paying for my English breakfasts, this is roughly half the quantity! (super examples: un et deux et trois. All so much better).

Overall, The Table Cafe is definitely a case of style over substance. It’s very easy to buy into the hype of a place if there are people standing outside, but I’m disappointed to report that that was a misleading signal. We queued for 45 minutes. For that time and money, I could have had three times the time in most London cafes. When you're sat in a poncy restaurant and you're wishing you went to McDonald's, I have to tell you, it ain't great.

Discovery from stalking the BBFC app that interests me and only me #1: 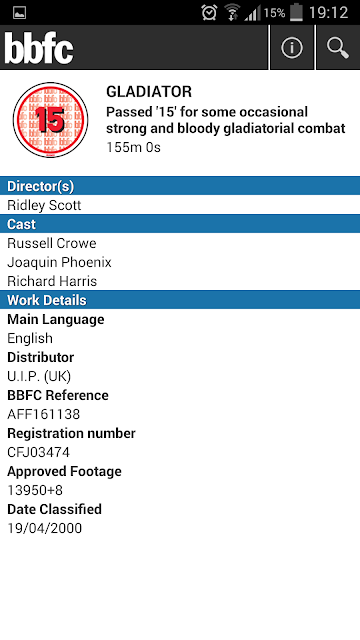 I'm probably the only person who's amused with this, but a film called Gladiator contains 'gladiatorial  combat'? Who knew!? 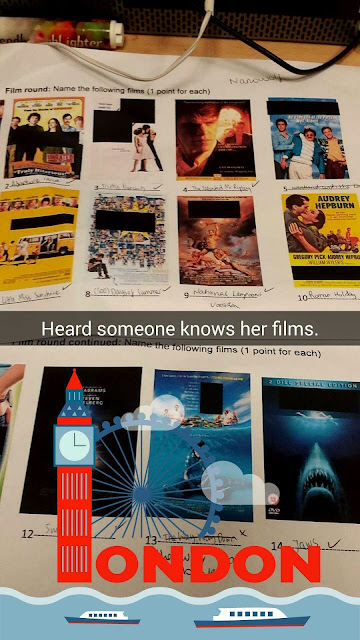 Being a nerdy film obsessive loser with a film blog who only I read has its perks occasionally ;)

yellowbluepink States of Mind exhibition at the Wellcome Collection.

On Thursday, a friend and I visited Ann Veronica Janssen's installation/exhibit at the Wellcome collection. Basically, you enter a room which is pumped with coloured mist, the colour of which changes throughout, and in doing so, altering your mood with the colour. I bought along my Moschino Lolita sunglasses and a lot of photos were taken! 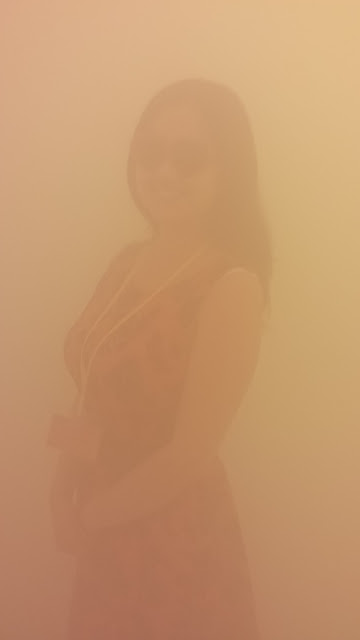 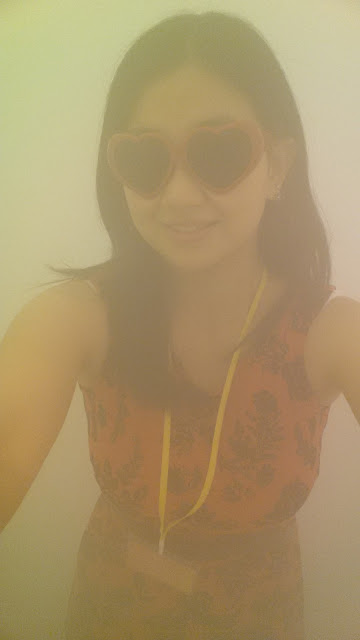 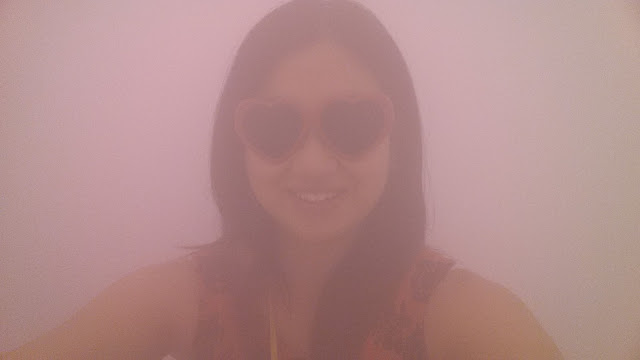 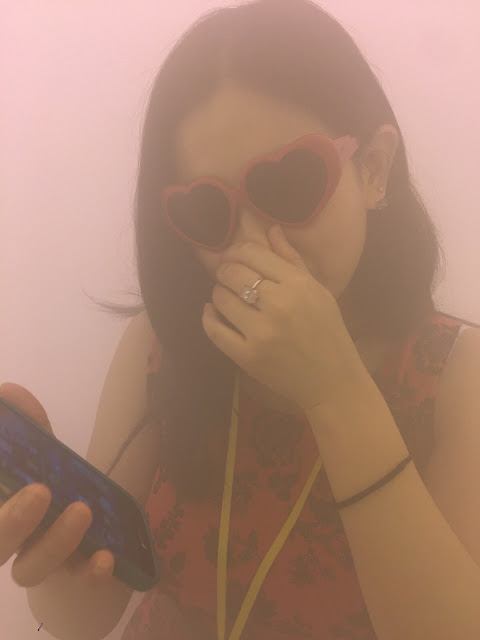 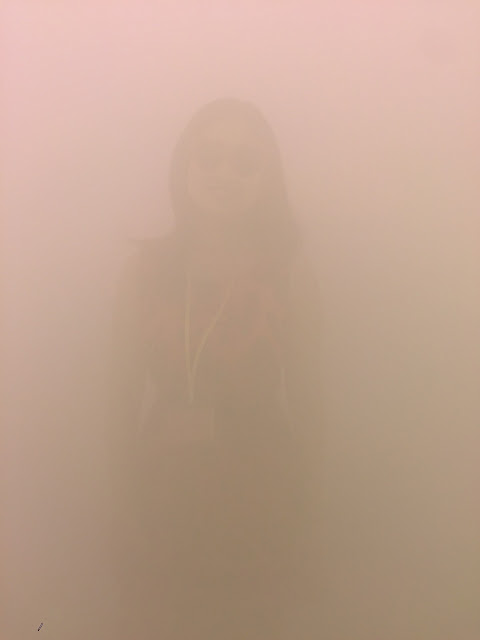