The servings at this much (over)-hyped pizza parlour didn’t taste anything out of the ordinary compared to a bog-standard oven pizza you can buy at Sainsbury’s, and compared to Sainsbury’s Taste the Difference, the meals completely paled in every department.

Portion-wise, they left a lot to be desired; the cooks scrimped on the components of the meal that actually cost money (aka, the meat and veg, as demonstrated by the photo below), choosing to swamp you with dough instead. Big mistake: I prefer thin bases. And, ironically, they couldn’t even get the dough right; look how charred that is! 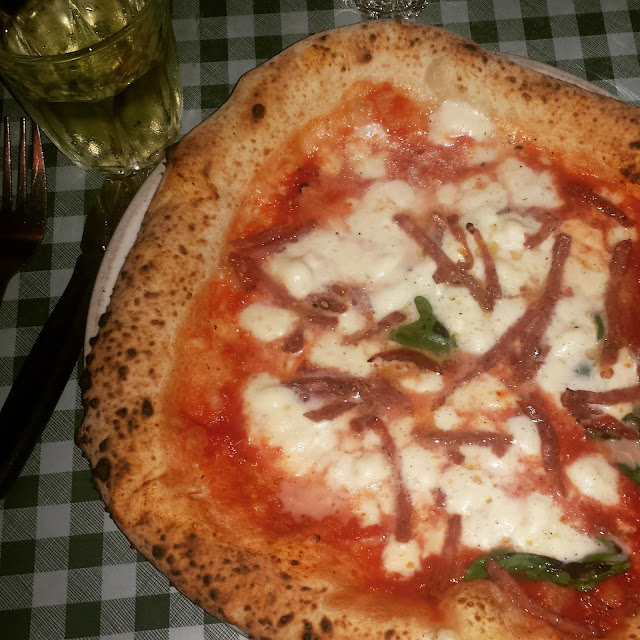 I know the chefs will try to make an excuse for not using too many ingredients by saying it’s all about the nuance of the flavours, but personally, I like big, bold IN YOUR FACE bursts of flavour, not so-slight-you-can-barely detect (or, indeed, see) it.

The menu, which boasts a fair few esoteric ingredients featuring truffle oil, fior de latte, nduja (Calabrian pork sausage, in case you were wondering), smacks of trying to wow its punters with the decoration and ostentatious vernacular, whilst not even getting the fundamentals right.

The wine selection was uninspiring and served in trashy-looking tumblers rather than wine glasses (in the photo above, the low-rent crystalware of choice has managed to make white wine resemble piss). I know it shouldn’t matter, but somehow, it did – drinking wine from such a generic container contributed to the downmarket vibe of the venue.

Another problem was the spacing. Compared to some grander restaurants in central London with their cavernous positioning, you were jammed in at Pizza Pilgrims like sardines. This is semi-justified by the low prices of the restaurant (you can’t expect Ritz-level service when you’re not paying those prices), but it certainly didn’t contribute to any good will I felt towards Pizza Pilgrims.

Why would you shell out £10 for a sub-par pizza when half that price buys you something much more delicious from the Taste the Difference counters at your local supermarket, or, instead of Taste the Difference, a standard pizza with some leftover dosh for your favourite toppings, as per the confection here, which was infinitely satisfying than the burnt mess I had to subejct my poor taste buds to in Pizza Pilgrims?

I am almost automatically wary of central London pizzerias, because, with the exception of the delectable Icco’s, they’ve all proven to be flops. Bit unfair, I know. But Pizza Pilgrims is another example of, rather than concession from, the rule. Not worth any kind of pilgrim.

For my other reviews including pizzerias that are actually worth visiting, go here.