I have been awful in neglecting following the Oscar race this year, but, alas, it's never too late. Predictions for who will win tonight!

Outstanding Performance by a Female Actor in a Supporting Role 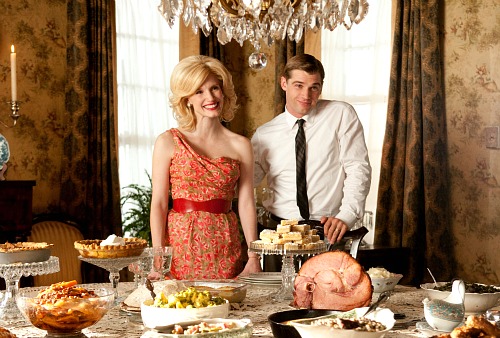 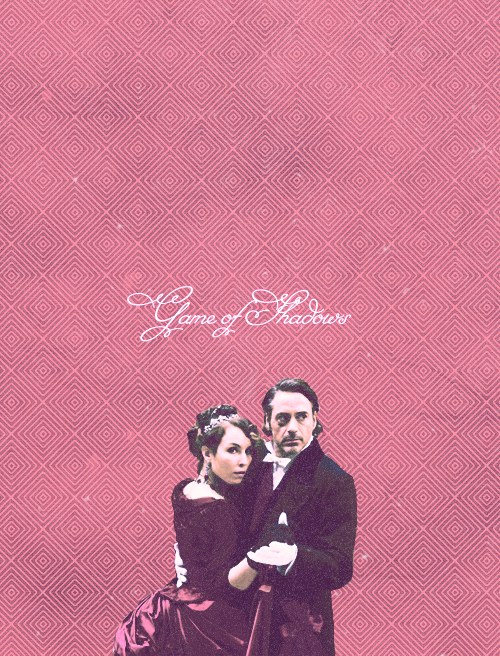 Sherlock Holmes has noticed a selection of seemingly unrelated events – bombings, murders of intellectuals, and he, as only he can, pinpoints Professor James Moriarty as the culprit behind all of these. He is right of course, and soon his sleuthing brings him face-to-face with the villainous genius. Holmes asks Moriarty to keep Doctor Watson out of their intellectual game of chess (Irene Adler has sadly, already been made collateral damage as a result of the two’s mental warfare) , but of course, in saying so only gets his wingman embroiled into things further. It is up to Sherlock then, along with his long-suffering best friend to stop Moriarty before he stops them and reeks war on the rest of Europe.

Much as with the original, the film belongs to the two co-leads, and the fact that they clearly had fun making the film rubs off on us in an infectious Hollywood romp with moments of ingenuity. Unlike with the first, Sherlock’s older brother rears his head, and here, he is played by flamboyant actor Stephen Fry. He is a hoot and a half, and one scene in particular where he is taking to Dr Watson’s wife (played by Kelly Reilly, gorgeous as always) wearing absolutely no clothes, is particularly amusing. There are also laughs to be had in Sherlock’s latest past time – camouflaging himself into his surroundings. As with another Hollywood crowdpleaser of 2011, Kung Fu Panda 2, this film wouldn’t be half as fun without the charms of its leading man.

Elsewhere in casting, Jared Harris makes for an excellent James Moriarty. Whilst he is not as outright creepy as Andrew Scott in the BBC’s modern day TV show, he has the more professorly element of Moriarty down to a T. His scenes with Downey Jr make for great a great cinematic showdown. Noomi Rapace, from the original Girl with the Dragon Tattoo, is also present in this film, with long hair this time, and whilst she isn’t given a whole lot to do in terms of acting, just her presence (she is someone who naturally exudes badass) contributes to the film’s awesome and contributes to its continental flavour as Sherlock, Watson and she and her gang go across enemy lines in order to catch Moriarty.

The big-screen outing of Sherlock Holmes 2 will invariable suffer in comparison to the second series of Mark Gatiss and Steven Moffat’s fantastic TV show, which, funnily enough, ends on a similar note as the film, albeit a much more sombre tone. Of course it’s not as good are as clever as the TV show; very few things are. But in its own right, it’s rollicking good fun. Guy Ritchie always does best when he’s playing it straight, as well as given a few decent fight scenes to direct, and he plays to his strengths here (he could, however, have toned it down with the over-stylisation in slow mos and too much sound editing). Downey Jr and Law have plenty of fun, the action sequences are entertaining, rendering this a worthwhile two hours.
Grade: B+
Posted by Emma at 1/29/2012 04:07:00 pm 6 comments: 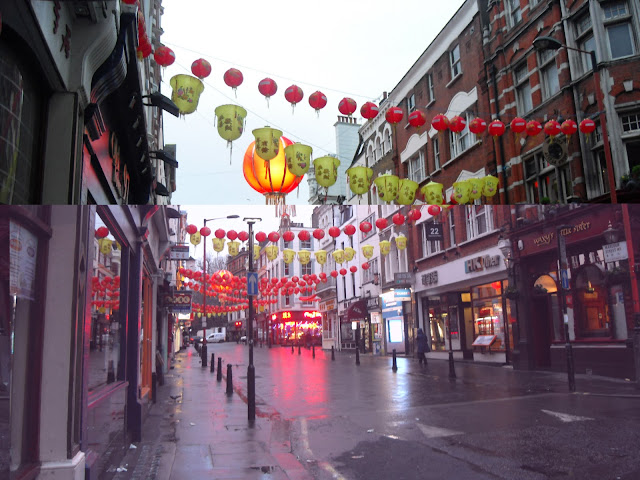 You've got a smile that could light up this whole town.

I've been revisiting the Taylor Swift tracks on my iPod recently, and I don't care what anyone else says, I still find her songs a delight. One lyric in her "You Belong with Me" song, particularly rings out to me, I find it charming in its corniness, you've got a smile that could light up this whole town. And it got me thinking, several of my favourite celebrities genuinely do have smiles so fabulous they could metaphorically light up a town. Here be a few of my favourites!

There are plenty of footballers whom I fancy more than AJ, but his smile, but the unadulterated joy radiating from the half moon on his face is just a joy to behold. Adorable!

Her cheeks are absolutely gorgeous and I love how easily her lovely smiles come. Her hair, a cascade of curls also frame her face perfectly and the endless supply of lipgloss she has only makes her smiles lovelier.

The cheekiness that comes with her grins adds to their awesome, and she has the largest, most unforgettable eyes ever.

This boy most certainly does know he's beautiful, but I don't even care. He's a jack the lad, but so, so, hot with it. And that cheeky grin, goddamn.

This gif of Hailee giggling is one of my all-time favourites. Her effortless charm and unpretentious, natural happiness is completely infectious. I adore her!

01. Dianna Agron
Oh, she is divine. The combination of Lolita lips, exquisitely unusual eye colour and long eyelashes, as well as her flawless skin and bone structure, make for the most beautiful smile I have ever seen, bar none.

When I find myself in times of trouble,my favourite comfort food is ice cream. Which is just as well, because the flagship Haagen Dazs store in London has a wide range of delicious ice cream, and just one bite of their sensational creations, makes me feel I've died and gone to heaven.

The strawberries and cream & pancake combination. The light frothy cream is a perfect complement to the ice cream and pancakes, and the chocolate sauce is a wonderful extra.

If you're in a hurry, there's a takeaway section of the store, where you can order up to four scoops (in a box or in a cone), top it off with some delightful chocolate sauce and eat at your own pace as you wander around London. :)

4 shot glasses with chocolate ice cream, each with a surprise extra as well (nuts, other ingredients) to keep things interesting!

And last but by no means least, Haagen Dazs this month released a fantastic new brand - secret sensations. Inside each pot is a delicious taste (creme brulee or chocolate) that just melts in your mouth and goes fantastically with the ice cream. TASTE IT.
Posted by Emma at 1/21/2012 09:29:00 am 6 comments:

I picked up a coupla things in the January sales, but the most prominent was this ADORABLE denim miniskirt from Miss Selfridge, down from £25 (if I remember correctly) for a cool £6.30 with student discount! I love it. Here it is in two very different looks: 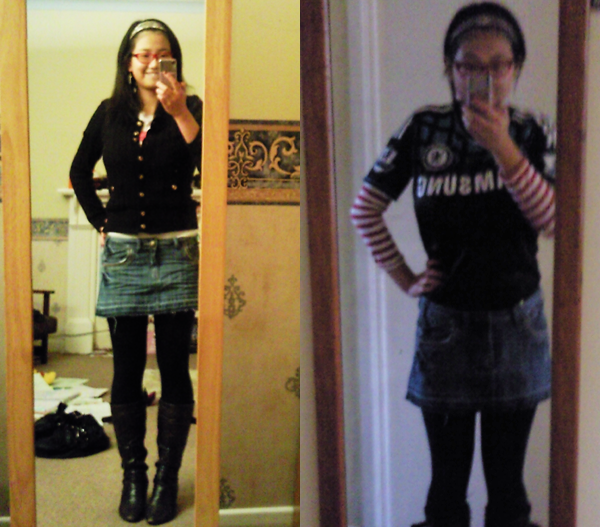 In time for the New Year comes a second series of Mark Gatiss and Steven Moffat’s wildly inventive Sherlock, which takes the classic stories from Arthur Conan Doyle and sets them in the hustle and bustle of London. Smartphones, blogs, laptops and fancy gadgetry all become part of the story-telling as Doyle’s clever creations are given a modern day spin, and heading all of this unlikely but massively successful creation are the odd couple of Benedict Cumberbatch as the genius but extremely irritating epoynomous character and Martin Freeman as his long-suffering army doctor friend and housemate, Doctor Watson.

The season starts where series one had left off, and thus in, quite literally, an explosive manner as Holmes and Watson are in a swimming pool room, face-to-face with Sherlock’s nemesis, the brilliantly dastardly Jim Moriarty. He is seconds, nay, nano-seconds from doing away with the pair of them when Moriarty receives a phonecall which pulls his attention away from the two and gives them a lifeline. We see that this phonecall came from none other than a vampily-clad woman, and not only that, but she seems fond of playing sex games with other women. The woman – as she will be called by Sherlock – will play a huge part in the episode, as it is really centred around her. It is of course, the only person who has ever proved a match for Sherlock Holmes, Irene Adler. 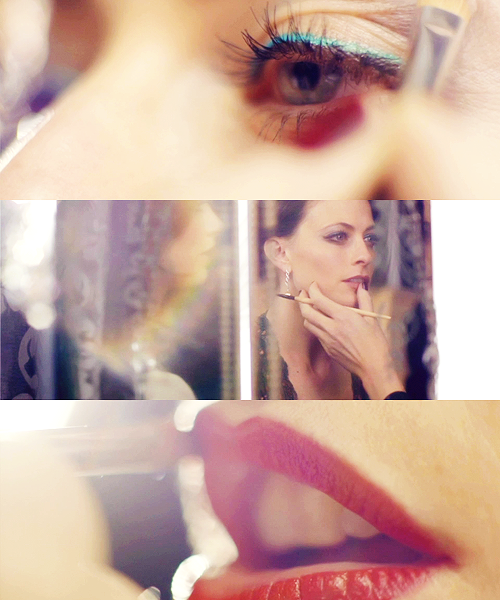 Irene Adler is played by young riser Lara Pulver, and from the moment we lock eyes with her on screen, we know we are witnessing someone special. Looks-wise, God spared no expense with her- beautiful eyes, the skin of an angel and the body of a Greek goddess, as well as a voice that exudes femme fatale all over. It was an important call in casting one of the fiercest female literary creations and the show’s producers could have easily opted for the easy option and gone for a more mainstream actress, but they put faith in Lara Pulver and she has repaid them handsomely with a fabulous performance that exudes sex and more than holds her own against the show’s talented and experienced males.

The episode, “A Scandal in Belgravia”, is loosely based around the Conan Doyle short story “A Scandal in Bohemia.” Except now, Irene Adler is a high class call girl who specializes in whip-play rather than an opera singer, and she has a collection of photos on her camera-phone rather than one bulky photo. These photos are of Adler with a female member of the Royal Family (or thereabouts), and Mycroft Holmes has enlisted his little brother (who’s relationship with is the very definition of love/hate) and Dr Watson to go get those pictures back.

Along the way, there are twists and turns aplenty. I was blown away by the ingenuity of the first series with how it subverted the Sherlock blueprint and managed to use modern day technology as part of the story-telling and detective process, and wasn’t sure if it would feel quite as fresh this time. Reality? It felt better. Doctor Watson’s keeping a blog is an amusing sub-plot and there is one terrifically crafted scene in which Sherlock Holmes, due to becoming somewhat of a C-list celeb due to said blog, is photographed by the paparazzi, a stream of photos which find their way to broadsheet papers, including The Guardian. Wonderfully filmed and a witty nod at the media obsession that we as a nation are getting.

As far as awkward, rude detectives go, this is also the first time Sherlock has shown interest in another woman. Irene Adler is stunning to look at, no question about it, but what really draws Holmes to her is her intellect. She is always three steps ahead of the chess game – each of her phones, combinations etc have two PINS – one which will open the safe and one which will alert the police, and even when you think she’s reached the end of the road and run out of lives, she manages to surprise you. There is one scene in which she half-seduces Sherlock by leaning into him, which plays out as one of the most erotic things I have seen in TV – yet no kissing or sex was directly involved. Incredible.

The first episode of Sherlock had everything I could possibly have wanted from a TV show and more. A showdown in Buckingham palace? Check. Some kick-ass fighting? Check. Retribution for some of the goons who hustled poor Mrs Hudson? Check. Some knowledge into the games Britain and Germany played with each other in the war? Check? A password that had me baffled for the whole episode and then finally, when it was revealed “Ahhhhh!”? Checkmate. The acting was faultless, with the camaraderie and banter between Holmes and Dr Watson timed to perfection. Something that has always bothered me about Holmes – although I wouldn’t expect him to be any different – is that he never gives Dr Watson the credit he deserves for everything he does for him, and this is exhibited here, when poor Dr Watson loses yet another girlfriend due to his need to protect Sherlock. The script was a work of genius, and I cannot but tip my hat to Gatiss and Moffat. All in all, the show was an overarching triumph. Next Sunday now seems an age away.
Grade: A+
Posted by Emma at 1/02/2012 07:08:00 am 6 comments: