The ultimate date movie Gone Girl is on Netflix, which allows me to pore over every shot and admire the precision with which David Fincher bought the novel to life. A touch I particularly liked was displaying Amy's undergraduate and Masters certificates:

Like the scheming eponymous lead, I also hold an undergraduate and a Masters degree. Unlike Amy Wexford Elliot Dunne, however, they're from institutions slightly less distinguished than Harvard and Yale.

All that being said, if my brother succeeds in graduating from Cambridge, then gets his MSc from Oxford or an American Ivy League, then he can consider himself as decorated as Amy! 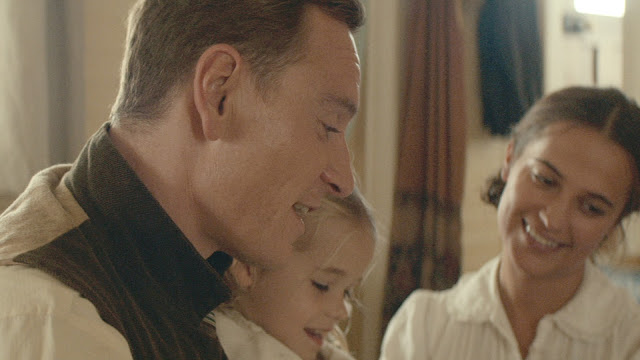 I saw The Light Between Oceans yesterday. I thought it was absolutely bloody awful (Light Between Oceans? More like SHITE between Oceans), bloated, over-sentimental, and various characters' actions didn't seem consistent with their personality that they'd exhibited previously. It was even worse than The Place Beyond the Pines, if that's possible.

Although Michael Fassbender and Alicia Vikander both gave strong, affecting performances as the parents who are blighted with miscarriage upon miscarriage, I'm starting to find Alicia Vikander's continual thirst for Oscar glory a little trying. You just won one girl, calm down a bit!

This frustrates me because there's no doubt that Vikander is a great actress (loved her work as the alluring robot Ava in Ex Machina), but I feel her talents would be put to better use if she didn't try so hard. That she won the Oscar this year for her work in The Danish Girl, a film which encompasses the Trifecta of Awards Thirst: Eddie Redcarpet, director Tom Hooper and Alicia, illustrates that begging for awards can reap its desired effect.

Personally, I'm not averse to an actor campaigning relentlessly if I thought they deserved the gold (#YouDoYou), which is why I'm a lot more forgiving to Anne Hathaway for working the awards circuit, hard, in 2013, because she slayed as Fantine.

But it's just a shame Alicia had to win and in doing so, stealing Rooney Mara's Oscar for such a brazenly awards-orientated role of the put-upon supportive wife, as opposed to her more intelligent and restrained performances in Ex Machina or The Man from U.N.C.L.E, performances that were far more engaging and allowed her natural grace to shine, rather than sobbing incessantly, which was all she did in The Danish Girl. I like my Oscar-winning acting turns to come with a bit more nuance.

I do like Alicia (when I saw her first in 2012's Anna Karenina I described her as 'a very pretty Swedish actress'), and those big brown eyes of hers were just made for emoting. And despite The Light Between Oceans craving awards, it probably won't receive them, as the film has (rightly) been received with muted reception in the US, so graciously, I won't have to resent her more during this year's Oscar season.

But with another Oscar-begging title out next year, Tulip Fever, I'm afraid I'm going to have to brand Alicia Vikander the female Eddie Redmayne in terms of serially appearing in awards-bait. Eddie Redmayne has a less-than-flattering monicker 'Eddie Redcarpet', given in reference to how he played a disabled character and a transgender character, back to back, in order to receive an Oscar win and a nomination, respectively. Alicia Vikander is approaching this level of strategic film choices, and thus, I have no choice but to dub her, Felicia Vikander. 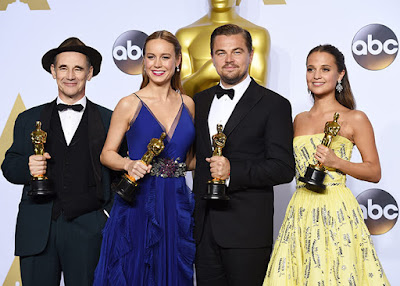 Side note: Alicia wasn't the only one guilty of being a little too keen to win her Oscar this year, as Leonardo DiCaprio and Brie Larson were campaigning endlessly, to the point where it also turned me off Brie (I thought Saoirse Ronan should have won for her majestic performance in Brooklyn). Between those three, they made 2016 the desperate Oscar campaign I'd ever had the misfortune of witnessing. (I love you Leo, but was The Revenant a cold shoot by any chance? You hadn't mentioned).

These three's Oscar thirst was further accentuated when compared to the behaviour of Brit Mark Rylance, winner of Best Supporting Actor, who did zero campaigning, and didn't even show up to BAFTA, the movie award body of his homeland, to accept his gong, because he was acting on Broadway at the time.

So, whilst thirst paid off in Leo, Alicia and Brie's cases, it's encouraging to see that some actors don't feel the need to try so hard, and were happy to let their acting do the talking.
Posted by Emma at 11/05/2016 11:31:00 am