A Look ahead to Best Supporting Actress.

It’s half term and my computer at home keeps sporadically disallowing me from connecting to the Internet, so I don’t know how many of these I’ll be able to do this week. I will try my best though, I think I'll be fine.

How I did: 60%. I predicted Catherine Keener (buzz and other nominations swayed me) and Kelly Macdonald (blind faith.)

I haven’t seen Amy Ryan in Gone Baby Gone, so I can only give comments on 4 of the performances.

01. Saoirse Ronan, Atonement
Although I’ve whored and whored this performance many a time, it never gets old to talk about one of my favourite performances of the year, so let us recap: Saoirse Rona 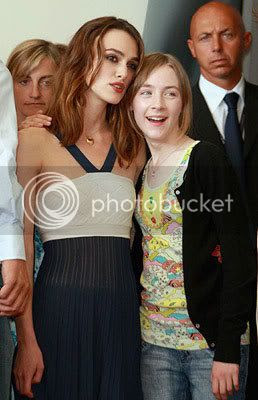 n plays Briony Tallis, a self-proclaimed “writer” with a massive imagination. When she was younger, she had developed a crush on her family’s gardener, Robbie, which she believed to be love. Several years later, at 13, she witnesses Robbie and her sister Cecilia loitering around at the fountain, and this, along with a note that Robbie writes, sets off her imagination in the worst way.

Saoirse is… transcendent. There are few performances from young actresses that have really amazed me (Wei Minzhi in Not one Less, Ivana Baquero in Pan’s Labyrinth and Ana Torrent in The Spirit of the Beehive being some of the select few) but Ronan’s is one of them. From the very start of the film, where she runs excitedly to mummy to show off her new script, to the way she tries to direct Lola and her two brothers into acting, to the confused way she tells on Robbie, she’s got Briony down to a t - impulsive, a know-it-all, nosy, but essentially, just a child. Saoirse Ronan captures Briony’s flaws and mannerisms perfectly (her reaction at reading the c-word was hilarious), and, when I saw the more pathetic version of her later in the film, (Romola Garai in the “I am very very sorry…” scene kind of echoed Ronan when she thanked McAvoy for saving her life), I appreciated her performance even more. In Garai and Ronan we have a character who is still “just a kid”, who made a huge mistake, and, though Ronan’s selfish teenager didn’t know it, they would have to pay for it big-time.

She’s just wonderful, basically. I am both hugely jealous and in awe of 2007’s star in the making. With Emma Watson giving us so much eyebrow acrobatics and histrionics, Saoirse Ronan's subtle, haunting portrayal of Briony Tallis is exactly what cinema needs. A 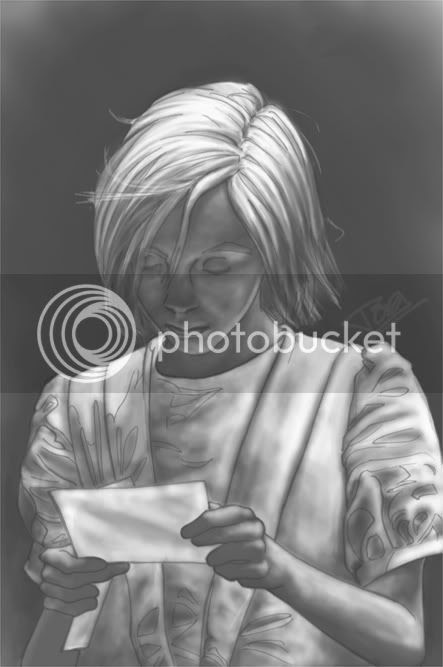 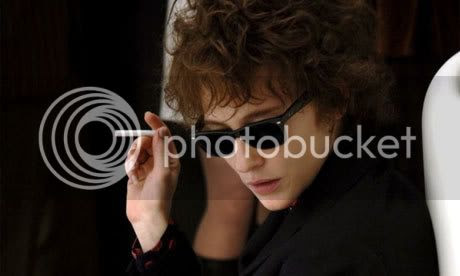 Before I saw this movie I was pretty sniffy toward Miss Blanchett for three reasons – 1) that she’d gotten nominated for her non-supporting overacting masterclass in Notes of a Scandal last year, 2) that she got nominated this year in Lead Actress for nothing but a rehash of a performance she did better a few years back and 3) that she was gonna be taking the Oscar off Saoirse. But, watching I’m Not There., I have to grudgingly concede that this performance is more than just the whole “woman playing man” gimmick; Cate is actually pretty good. She represents the artistic Bob Dylan, and, perversely, is probably the best out of all the “Bob Dylans” at well, playing Bob Dylan (though to be fair he was kinda androgynous during that era). Aside from all the obvious ticks and mannerisms, I think she portrayed Dylan’s emotions perfectly – he was twitchy and sarcastic, yet she still conveys a layer of vulnerability. So, who woulda thunk it? An actress I’ve been hating on all Oscar season, bungs up and impresses me with their craft! B+/A-.
03. Tilda Swinton, Michael Clayton
Although I still can’t see her as anything other than the White Witch off Narnia, Tilda Swinton plays a woman who tries to act like one of the big boys in the legal world, has sold her soul to the corporation, but actually can’t cope. Although I wasn’t bowled over by this performance, I still found Swinton, as ever, compelling to watch. B-

04. Ruby Dee, American Gangster
I’d hate to accuse Oscar of nominating someone out of pity or something… but that’s what it must be, because there was nothing memorable or special about Dee’s performance! With the plethora of talented supporting actresses this year, you bung this in?!?!?!?!?! I’m sorry, I know it must piss you all off by now, this phrase that I keep using, but, really: “Are you havin’ a laff?” E

So.
Who will win: Cate Blanchett.
Who deserves to win: Saoirse Ronan
Who deserved to get nominated: 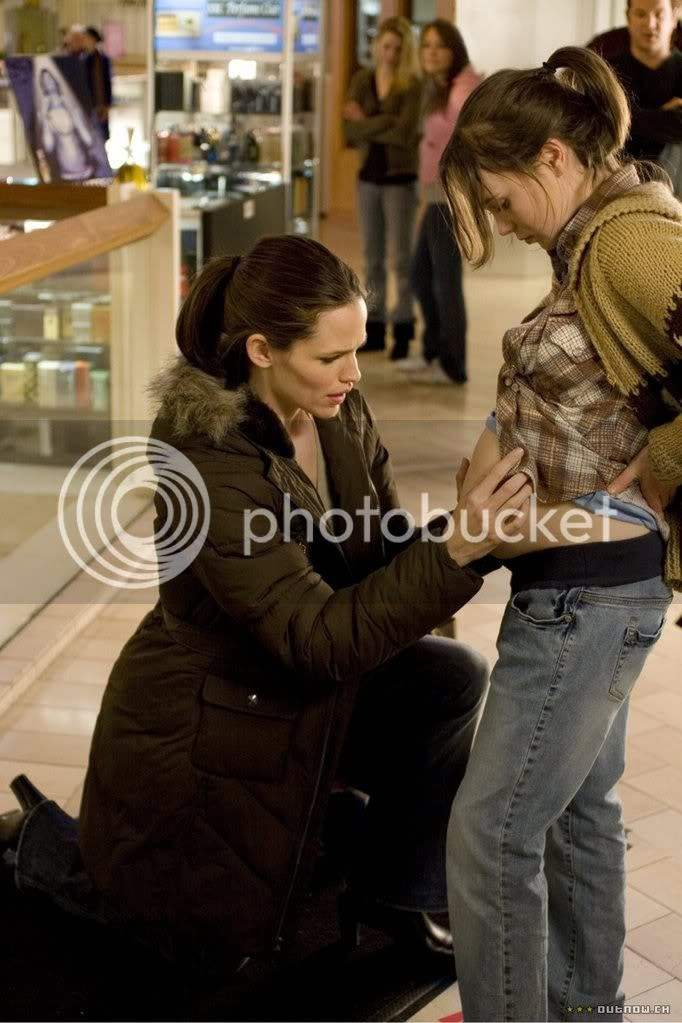 Three performances, actually:
Charlotte Gainsbourg in I’m Not There
Jennifer Garner in Juno
&
Kelly Macdonald in No Country for Old Men
Also, a note about Romola Garai in Atonement, ‘cos I’ve been thinking about this for a while: -

I think I may have underrated her performance on original viewing. She was terrific in the scene with the French soldier, but in my original review I said that her delivery of the “I am very very sorry” line was “a bit wooden.” Well, thinking about it, I think she was meant to be!! It was meant to sound rehearsed, I think, like she’d planned how she was going to say it for the past 5 years… and then on the big occasion, she bottles it. There really was a lot more depth to that performance than I’d originally noted.

A Look Ahead to Best Cinematography.

The nominees are:
The Assassination of Jesse James by the Coward Robert Ford, Roger Deakins
Atonement, Seamus McGarvey
The Diving Bell and the Butterfly, Janusz Kaminski
No Country for Old Men, Roger Deakins
There Will Be Blood, Robert Elswit

Having watched three of these films last week, the cinematography is still fresh in my mind. 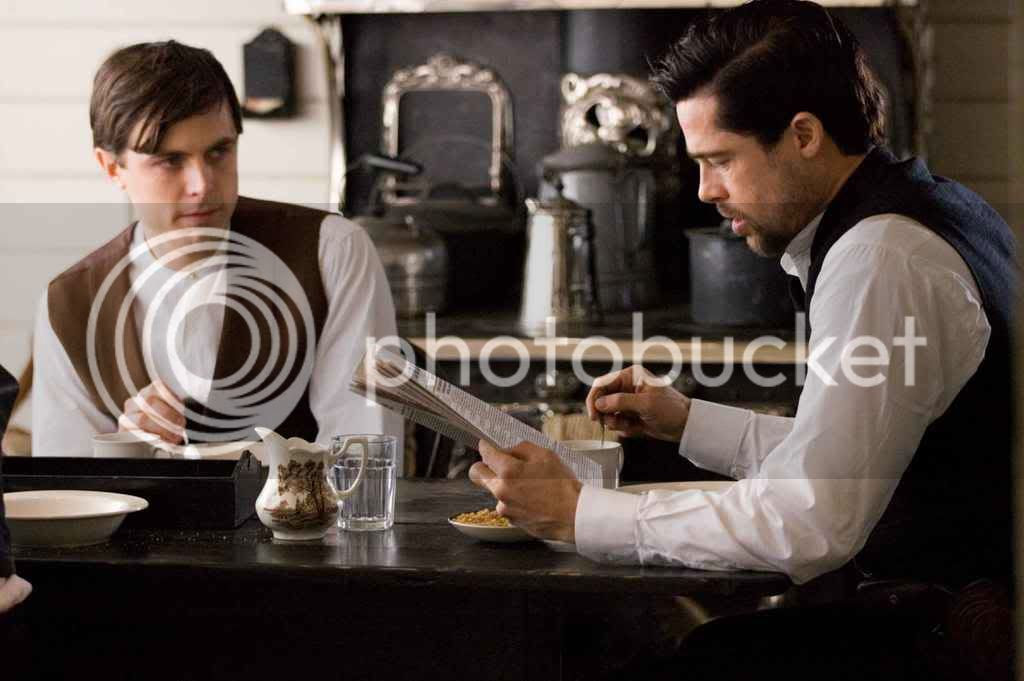 s this year, and they have never been this deserved. Much of The Assassination of Jesse James is set outside, in beautiful, full landscapes with willowy wheat fields and Deakins absolutely goes to town with his camera, whether it be through changes in focus, rich colours, dazzling use of light sources, careful manipulations of time, or fade-outs. In some parts of the film, Deakins even blurrs the edges of the frame to make it resemble like an old photograph. And the train robbery scene is shot masterfully. Some of the key themes of the film are conveyed through the camerawork, one of the key examples being of Jesse James himself, being viewed through the “lens”, as a poetic myth, some kind of legend that he could never live up to. Brilliant art, and it made the film ever more poignant. A*.

Atonement, with its pretty costumes and stunning sets is an absolute visual feast, but the cinematography is arguably one of the best technical aspects of the film. Capturing the mood of a wealthy 1930s household, cinematographer Seamus McGarvey’s first task was to convey the sweltering heat, which he did, through resourceful use of Christian Dior stockings over the lenses. Panning shots of Briony walking around the house as well as wide shots of the two sisters lying in the grass are amongst my favourites; they’re simple but beautiful. McGarvey manages to capture the beauty of Atonement in the grittier war scenes which included scenes of a bomber in flight reflected on the surface of an irrigation ditch. And of course, there’s that Dunkirk scene, which despite only taking two takes, probably took several months to choreograph. A.

= 03. No Country for Old Men
Another Roger Deakins work, and another film of a Western motif. Set in the sun-dried landscapes of 80’s, his cinematography perfectly illuminates the indifferent backdrop, portraying the Texas as a moral wasteland. The Coens are renowned for using cinematography to contribute to the mood and tension of their films, and Deakins does this here. The Devon-born Roger Deakins had been nominated 5 times before this year (for Fargo, The Shawshank Redemption, The Man Who Wasn’t There, Kundun and O Brother Where Art Thou?), but never won. If he doesn’t win this year for either Jesse James or this, there will be an assassination of and no country for the old men who voted… or something. (Basically, he needs an Oscar.) A-

= 03. The Diving Bell and the Butterfly
The filming of DB&B is beautiful through its dreamlike uses of colour which

fitted in seamlessly with the music, contributing to the uplifting and inspirational feel of the film. Cinematographer Janusz Kaminski (a regular Steven Spielberg collaborator) took home the grand technical prize at Cannes for his innovative approach to the visual style of the film, which features shots from the POV of Bauby, through one eye, so we can experience what its like to have his physical cripplement. In doing so, the movie screen is rife with life and beauty, despite the seemingly depressing subject matter, illustrating the film’s key point – that you don’t need a healthy body to live life to its full. A-

Although there wasn’t anything hugely flashy in There Will Be Blood, I really liked many of the symbolic images and shots. One I really liked though was the long tracking shot as he carries the injured H.W. to the building and we see him run away from the burning derrick. Tis all very intense. A-

In short, all five films were very deserved nominees. They were all stunning.

Who should win: The Assassination of Jesse James by the Coward Robert Ford
Who will win: No Country for Old Men
Who deserved to get nominated: no-one else aside from these 5. :D