As I've been banging on for weeks on this blog, Parasite should win. But the Oscars are very rarely about "deserve". When Moonlight rightly triumphed over Blah Blah Bland  three years ago, that was such a surprise, because it's unusual for the Oscars to actually reward the best film of the year!

Going by that train of thought, I don't expect the Academy to pleasantly surprise me tonight, and thus, they'll give the big two awards to the cut-rate Dunkirk, instead of the genuine originality and acuity of Parasite.

Even though I pessimistically predicted Once Upon a Time... in Hollywood to triumph in this category at the BAFTAs last Sunday, I screamed with delight when I was proved wrong, and Flo Pugh announced Parasite as the winner!

Not just because Parasite is the infinitely superior written film, but because it meant the momentum was with Parasite to go on and win Best Original Screenplay at the Oscars. And thus, I am predicting it to rightfully be crowned here tonight!

Academy, don't let me down and give it to OUATIH! Quentin Tarantino does not deserve a third Oscar! He barely deserves one.

The bookies have the same odds for Parasite to take Editing as they do Ford vs Ferrari, and most Oscar-prognosticators are split evenly for who they're predicting for this category. Parasite has fewer cuts, 960 compared to the average in a film of 1,250, and Ford vs Ferrari's car-racing scenes were certainly cut with flair.

The Academy have historically rewarded the editing for frenetic films that rely on more editing (e.g. Whiplash, Mad Max: Fury Road and last year's egregious win for Bohemian Rhapsody), which would favour Ford vs Ferrari.

But I am stubbornly predicting hopefully here, almost in the hope of willing a win for Parasite. Much of the enjoyment of Parasite came from the economy of  each scene; there wasn't a superfluous shot in the film. Every shot served a purpose, even if you didn't realise its purpose until later. The editing in Parasite may be less flashy than in Ford vs Ferrari, but it aids the story (and Bong's vision) perfectly. So I hope the Academy repay my faith and reward the editor here.

It would send a great message that the Academy reward crafts on the quality of them, rather than the quantity.

But in terms of astute use of the production design to assist telling your story, Parasite deserves this, hands down.


So sadly, I'm predicting six awards for Call of Duty: WW1. I want Parasite to win all six awards it's nominated for, and to make myself feel better about the fact that it's probably not happening, I partook in some emotional hedging in the form of a monetary bet: 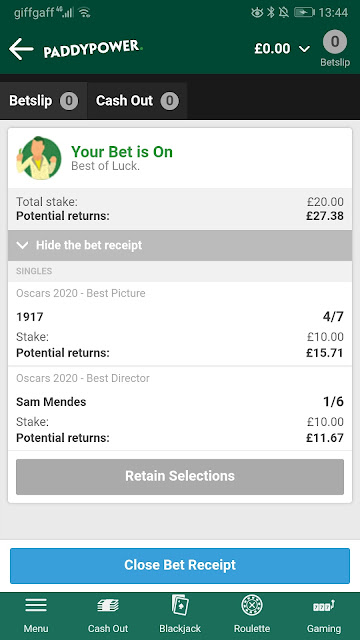 My predictions last year were decent, especially in how I anticipated that we'd give Best Film to Roma, a move that was not mirrored by the Academy Awards, who went for Green Book.

Thus, as is a tradition on my blog, I'd try my hand at predicting tonight's British Academy Film Awards! Remember, the below is who I think will win, which very rarely overlaps with who I think actually should win.

Sadly, I think this uninspired Dunkirk rip-off will triumph, even though it's not a patch on Dunkirk, and feels like watching someone play a computer game for 2 hours. I see BAFTA falling for the 'made to look like it was filmed in one shot' gimmick, and even more sadly, the Oscars to do the same next week.