Wang Jing and Jing Wong's painfully unfunny spy spoof sees Andy Lau's Interpol officer Agent Sampan Hung joining forces with Huang Xiaoming's playboy entrepreneur to retrieve a 'Seed of God' which has been stolen from them by a shady Japanese crime syndicate, Crescent. Their mission sees them bounce from Macau to Milan before ending up in eastern Europe. Along the way is all manner of comedy of errors as the directors and writers try to desecrate the memory of all decent spy films by pastiching them, woefully. 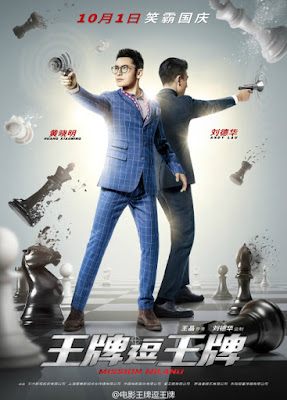 I was intrigued by Mission Milano, mainly because I noticed that the broadsheet papers, which review about ten film releases a week, didn't review this title. Having watched it, I can see why. This is one of the cheapest, tackiest films I've ever seen. It's an OTT satire, and thus, the audience are not supposed to take things too seriously. I'm not sure the cast and crew are supposed to heed that advice so rigorously, though. Characters have a nonplussed look on their face for the majority of the film, even when a knife is pressed up against their faces. The props alone would give any Hollywood set director nightmares; even the knives which get thrown around look plastic!

There's a big case of 'you don't know what you're doing' which indicates that the film could have done with a European script consultant. The film title pays homage to Milan, an Italian metropolis. Yet the Bond-inflected score which runs throughout, has a distinctly Spanish flavour. Furthermore, one of the scenes is supposed to take place in AC Milan's final. Due to budgetary restrictions (something which is all too prevalent throughout the film), the filmmakers were unable to properly superimpose footage of such a busy match, and instead show shots of the football-going crowd that is half empty. AC MILAN'S FINAL WOULDN'T BE HALF-EMPTY, YO!!!

I'm sympathetic to the fact that Chinese films don't get the eye-watering funding that their Hollywood counterparts do, so they can't compete with them on elements like CGI. But if that's the case, Chinese film companies shouldn't strive to be making films like this, which require extensive amounts of CGI, and thus nakedly reveal the gulf in quality of special effects in American and Chinese movies. When there's a disconnect between ambition and means, the result is Mission Milano.

The cast are all pretty awful, save 16-year-old Nana Ou-Yang, who has the fresh-faced naiveness of an oriental Hailee Steinfeld, and was winning in her scenes. I don't blame the flat acting so much on the cast, as I do the thinly sketched / inconsistent characters. For example, Andy Lau's Agent Sampan is supposed to be a hard man and a suave lady's man, all in one (massive Bond rip-off). Yet at inopportune moments, he's found longing over his ex-wife. This isn't even a Casino Royale case of cause-and-effect, where his character is crusty because he was burned in the past. The film wants him to be both sensitive and frosty at the same time.

I would be lying if I said I was stony faced for the entire 102 minute running time. There were several occasions when I let out a splutter - often of disbelief at how much they were insulting the audience's intelligence with such a gaping plot-holes, and when the writers ran out of spy movies to send up, they turned to Star Wars, which took me by surprise. There were some cheap visual gags which tickled me, including a weird seduction sequence featuring some toe-sucking which quite frankly, I was amazed the BBFC passed at 12A (not the first time the BBFC have dubiously classified a 2016 Chinese film, now is it?). But overall, this is mindless,  tonally uneven, low-rent film making.

Barely anyone will see this film (there was only one other person in the audience other than me). And that's how it should be.

As much as it draws its name from the Italian city, 'Mission Milano' only spends at most a third of its time in it, hopscotching from Paris.