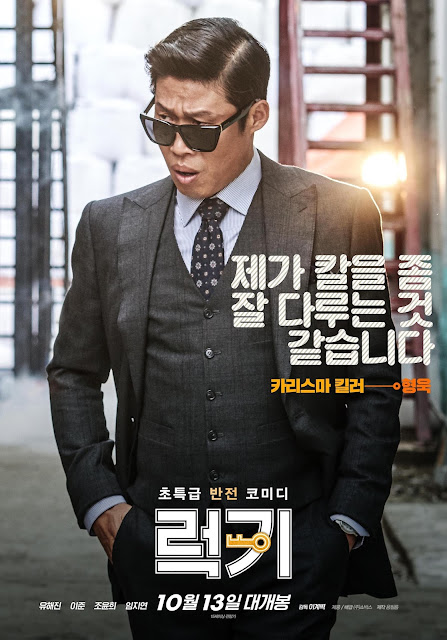 Jae-sung, a struggling actor (Lee Joon) who is about to take his life, seizes an opportunity when he spots Hyong-Wook (Yoo Hae-jin), flash hitman who has slipped on a bar of soap and made momentarily unconscious, by switching locker keys with him and assuming his identity. The 32-year-old out-of-luck actor enjoys Wook's wealth whilst the older man, with a lost memory and only the insurance card of the man whole stole his identity, tries to figure out who he is.

The set-up means there are visual gags and situational comedy aplenty as Hyong-Wook realises he has supreme martial arts skills, but, rather than using them to kill, carves a range of creative foods at the restaurant he acquires a job at. There are hints of Trading Places in the stark contrast in the way Hyong-Wook and Jae-Sung live; one having rolls of cash stored in biscuit tins and the other living in squalor, with the equivalent of two bucks to his name. However, the film doesn't delve too deep into  examining its social conscience, deciding instead to enjoy the farce instead.

As the plot develops, both men acquire love interests. Jae-Sung develops feelings for Eun Ju, the woman Hyong-Wook was tracking, presumably his next hit, whereas Lina (Jo Yoon-hee), who took care of Wook after his accident, is the one who gets him the restaurant gig, and supports him when he decides to pursue an acting career (in a classic case of dramatic irony, Wook meets Jae-sung's father, believing that he's his dad, and Jae-sung's father speaks dismissively of his actual son's unimpressive acting career, giving Wook the necessary resolve to become famous).

Although Eun Ju's character is relegated to the damsel in distress trope, Lina is winning as Wook's love interest, and the two share a great, tentative chemistry. The parallels with OldBoy, in that a supportive female helps the protagonist try to work out their mazy past in a Korean film, was not lost on me, although Luck-Key was a substantially fluffier watch than OldBoy. By giving the two characters romantic subplots, it grounds them and gives them motivation for their actions, motivation that Jae-sung, a deadbeat who was contemplating suicide at the start of the film, could do with.

Hyong Wook's adventures as an actor are comedy gold, and the film manages to traverse all manner of humour around the shooting process, some refreshing, some more clichéd. Hyong-Wook's adeptness in a fistfight catches the eye of the director, much to the chagrin of the divaish star of the show, a story arc that has been covered many times before, but given a Korean spin, still has legs. I also giggled as one of Hyong-Wook's competing actors, at the start of the process sensing he's fresh meat, tries to trip him up, but then, as Wook's star factor rises, he tries to coattail off his glory. 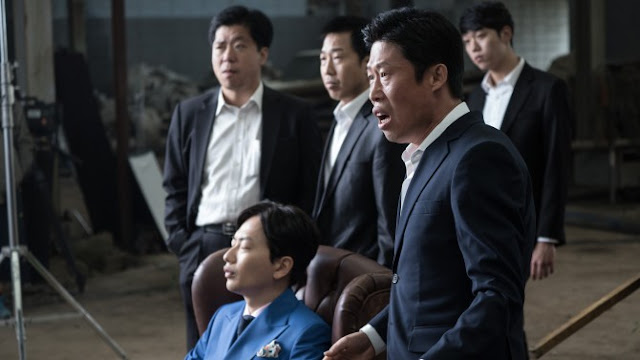 The other three leads are perfectly functional in their roles but Yoo Hae-jin is the shining star of the film, and it's not for nothing that Luck-Key revolves around him. A veteran of South Korean cinema, his character goes on a voyage that has him modulating between suave bad-ass, inept extra in historical movies, and bemused leading man, and Yoo Hae-jin excels at not only bringing plausibility to every wacky plot turn, but also imbuing Wook with an honest everyman quality that the audience will find endearing.

Overall, Luck-Key is a polished, charming film, with a neat subversive twist at the end that I didn't anticipate and more than enough chuckle-raising moments to keep the audience's attention until then. The fight scenes are well-choreographed and the big set-piece at the end was surprisingly gripping. Furthermore, for all the film's mockery of actors, it definitely has a soft spot for films, as hinted at by the affectionate closing credits.

Several have tried to balance comedy, drama, romance and action, and precious few of pulled it off. Luck-Key can count itself one of the lucky ones.

just watched this on netflix. i agree with your rating.I also enjoyed the performance of Yoo Hae-jin. I must admit i'm not very good on korean actors names. I looked up the cast list and saw that I had seen him in a few other things.
More shamingly, I had recently seen Jo Yoon-Hee in a tv drama. but didn't recognise her at all.
I enjoyed her performance as well, and also whoever played the arrogant actor.