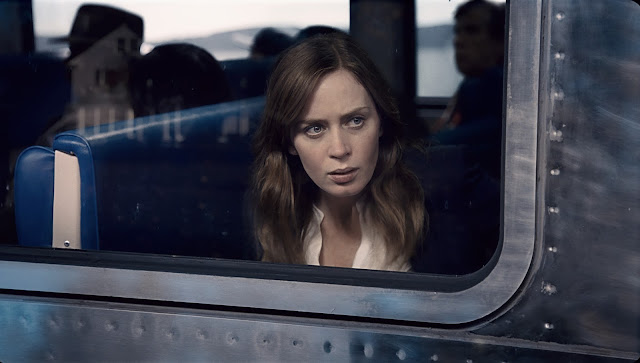 Rachel, a depressed 30-something alcoholic, embarks on a destructive Groundhog Day of a routine: taking a train which goes past her ex husband's house and peering at his newfound state of matrimonial bliss with the woman he cheated on her with, and their baby.

A few houses down from this seemingly perfect family is another equally photogenic, younger, couple, Megan and Scott, who have a penchant for shagging in clear view of commuters. One day, on her usual voyeuring, Rachel notices that Megan has switched up sexual partners, and, bringing up dark memories of her own, she reacts adversely, getting wasted and getting off the train at the station where she used to live. A while later, Megan goes missing.

In the title role, Emily Blunt is fantastic, giving a career best  turn. Her Rachel would be laughable if she weren't so pathetic, sipping vodka out of a plastic bottle, scaring off other commuters with her slurred speech and still pining for a relationship that long outgrew her.

Due to blackouts she gets from her deleterious drinking problem, her memory on the night of Megan's departure is hazy, rendering her a compelling yet unreliable narrator. Usually such a beautiful woman, Blunt de-glams considerably to play Rachel, looking quite rough indeed. She also convincingly plays drunk, no mean feat, given most attempts to act inebriated usually veer into insufferable caricature (see: Jennifer Lawrence as Rosalyn in American Hustle).

With a stagger and slurred speech, Blunt evokes sympathy from the audience for such a broken woman, particularly her impassioned drunken monologues, which could be given from many a hammered young woman I’ve encountered on the 11.15pm train home, haha. That she was completely sober during filming (Blunt was pregnant), renders her performance even more remarkable.

As the audience tries to discern fact from fabrication, Megan and Anna, Tom's new wife, enter the fray with their narratives. In the novel, the story is told from the P.O.V. of all three of these women, but in film form, such a fussy storytelling device is frustrating and distracting. The end product feels like a very poor man's Rashômon, not aided by an awful script that features, amongst other things, whiny voiceovers from Rachel and Megan, and clunky conversations between characters. Note to the screenwriter: lines like 'I'm not the girl I used to be', and 'I'm the mistress of re-invention' don't really suit the big screen. They'd be better suited to stage. Or a bad shampoo commercial.

Furthermore, every single character in The Girl on the Train, from the therapist who Megan was confiding in to the incompetent cop investigating the case, are unlikable. The three main males in the film were all quite misogynistic in their own ways, and thus, I simply wasn't engaged with the plot. You find yourself not really caring what happened to Megan, and whodunnit. Although the plot 'twist', when it hits, is as contrived as it is predictable.

Finally, the film suffers from a crisis of identity, as Tate Taylor wants it to be both sensual (sex scenes pepper the film, but they’re loveless, mechanical, and as a result, completely unerotic) and unsettling at the same time. What he actually gets is a movie that is both bland and dull.

Emily Blunt deserves a Best Actress Oscar nomination for her tremendously convincing depiction of a fragile woman. Whether she gets one remains to be seen, but sadly, I have my doubts; it is a strong year for Best Actress with buzz surrounding a three-way frontrunner status for Emma Stone in La La Land, Natalie Portman in Jackie and hopefully the eventual winner, Viola Davis in Fences (it's Viola's time!). 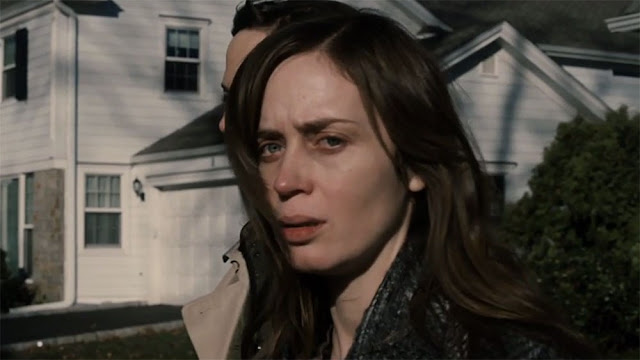 Usually, for an actress to get nominated for her performance in a thriller (a genre that is not really one of Oscars' preferred), the film has to have fared well with the moviegoing public, as Gone Girl (the third highest grossing 18-rated movie in the UK after 50 Shades of Grey and Wolf of Wall Street) and Girl with the Dragon Tattoo did. What those two films had, which The Girl on the Train lacks, was an extremely adroit director in the form of David Fincher, who's dexterous ability to manipulate the audience helped Rosamund Pike and Rooney Mara, respectively, give performances that transcended their films' pulpy roots.

Tate Taylor is, lamentably, a less gifted storyteller, seems to feel that, when all else fails, he can always go to Plan B: heavy-handed close-ups of Blunt's blotchy face. The actress deserves so much better than the director, or the film, have to offer.

Watch The Girl on the Train online full movie on www.Movies2Watch.xyz

It's downloading time, The Girl On The Train Audio Book is officially available on AudioBooksNow.