Me and my friend had an hour to kill before Bridget Jones’ Baby last week so we gave Vibe, the latest dessert parlour to open in Orpington, our patronage. (To be quite honest, there are now more ice cream places than Orpington needs. After all, the town only has a population of 15,000!)

I complained about one of Vibe’s main competitors, Cream’s, for having idiots for sales assistants, but at least the quality of their ice cream was infallible. The same cannot be said for Vibe, which was selling something as crap as this for £5.50: 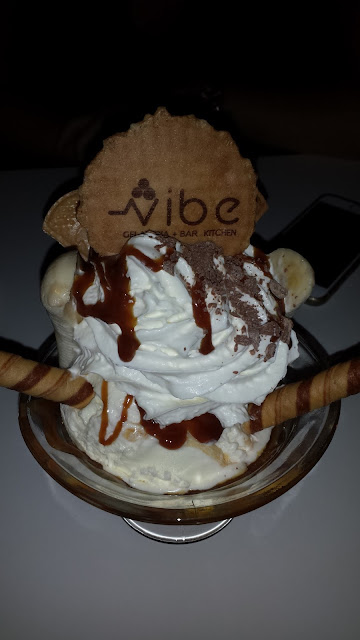 It probably looks harmless, but the ingredients had a distinctly C-list taste to it, as opposed to Cream’s, where I was wolfing down my ice cream due to the moreish components of the inventions. Also, if you just peruse over the menus of the two parlours, you’ll find that you’ll get much value for £5 at Creams’ than you will here. And the banana tasted off. Just saying. 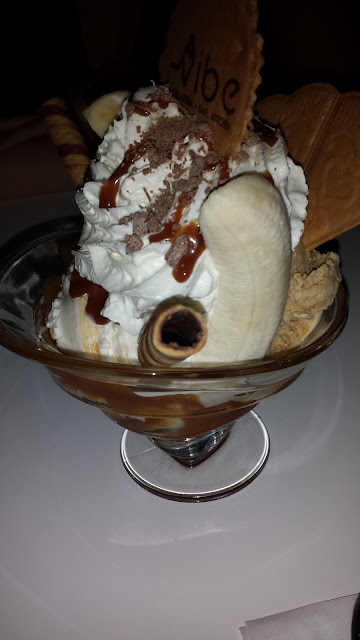 The main thing that irritated me about Vibe, however, wasn’t the below-par ice cream, but the ‘service’ (if you can call it that) that we got from the pushy waiter. Because Vibe has just opened, they were doing a deal, which was all cocktails a fiver. Normally, I’d be all over that; there are precious few things that make me happier than a good cocktail. But, like everything in life that I enjoy, there’s a time and a place for everything. A weekday where both of us had work the next day wasn’t the time for a cocktail, so we politely declined. Yet, he still kept trying to pressure us into buying one.

This man seriously needs a lesson in consent. No means NO. A fiver isn’t much money by any stretch of the imagination, but it’s still OUR money, and up to us how to see fit how to dispense the money. If we said we didn’t feel like a cocktail, he shouldn’t have been so damn persistent. Especially when, in a desperate attempt to stay relevant, the cocktails were named after films, and the Word Art job on the menu was not the most enticing: - 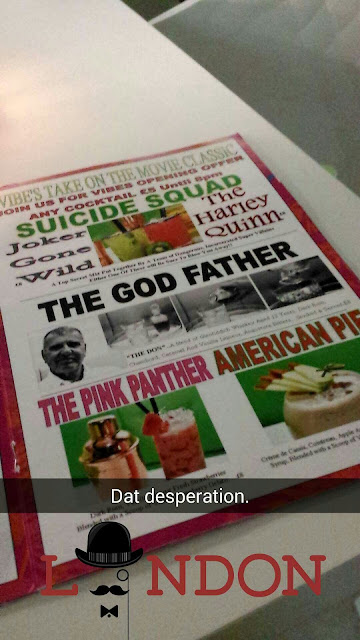 ‘Godfather’ is one word, just saying. And maybe they should have named one of the cocktails 'Enchantress', given that if this gelateria were an actress, it would be Cara Delevingne.

Something else which irked me was that when I got my phone out to take a photo of the creation, to point out how poor value for £5.50 it offers compared to Cream’s £4.75 creation, the waiter asked me to check into Facebook, to ‘raise publicity for Vibe, as it had just opened’.

Mate, do I look like a shill to you? And even shills get paid. If he wanted me to check in, he should have said they’d waive the fee of the (crap) ice cream, or throw in something free for us. I sure wasn’t going to publicly acknowledge I’d been to this hellhole on Facebook for free. Nothing for nothing in this world, mate. Nothing for nothing.

Final part of the rant: the manager of the restaurant was working that evening, cruising each of the tables to ingratiate himself with the punters. He spent more time with tables which were larger, which is completely fair enough, as by Law of Averages, there’s more people on that table that are likely to generate word of mouth about Vibe. But when he came over to our table, all we got was a brief ‘good evening?’ and before we’d had time to give a decent response, he’d bounced onto the next table.

I am not impressed with that. We may have been but two mid-20s girls who seemed reluctant to part with our money, and sharing one dessert between two of us, but we were still paying customers like everyone else there. The manager made a huge oversight by ignoring us. I can generate word of mouth too, mate. Ever heard of a blog?

It’s probably a tad injudicious of me to keep reviewing places in Orpington, and being a Jennifer Lawrence-in-American Hustle-esque cow in my appraisals, given I can see myself slowly talking myself into being a persona non grata in most restaurants in this suburban town.

But I’m not the type of customer who takes being mistreated lying down. And when I can pop to Tesco’s and buy myself a tub of Neapolitan ice cream and dust some sprinkles on top, why would I want to visit Vibe again? My own makeshift dessert would be infinitely more delicious and substantially cheaper than the crap they offer at Vibe, and graciously not come with a side order of ‘bad attitude’.