I've been making the most of the BFI London Film Festival - I saw this title today, and am seeing a horror movie on Sunday. 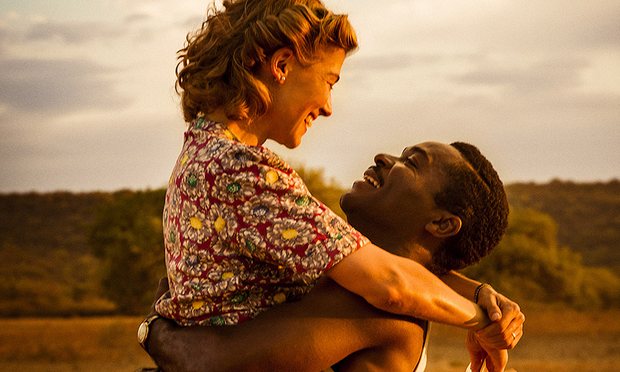 Seretse Khama, the prince of Bechuanaland (now named Republic of Botswana) is studying Law in London, primed for return to his country as King. One night, at the London Missionary Society, he meets Ruth Williams, a British secretary, and the two instantly connect. A whirlwind romance follows, culminating in his proposal of marriage and for her to return to his homeland with him, which she accepts immediately. It being 69 years in the past, however, their union is met with opposition from almost everyone they know.

Amma Asante's previous film, the delightful Belle, touched upon similar themes as A United Kingdom, and the two films both capably balanced delivering a true-life romance that crossed barriers, whilst defeating the insularity and racism that meet the protagonist.

Both also clocked in at 104/105 minutes, illustrating that important stories that deserve to get the film treatment do not have to suffer from a stodgy running time in order to get the message across. In both Belle and A United Kingdom's cases, with their concisely edited scenes and unfussy screenplays, Asante clearly has enough faith in the stories she's delivering to speak for themselves, without the need for frills. And both films are better for it.

A United Kingdom wouldn't be half as enjoyable it was without David Oyelowo's fearless, heartfelt performance. When he addresses the people of Bechuanaland, you can positively see the turmoil in his eyes, as his character juggles his national duties and his heart. I'm not ashamed to say I was moved to tears on no less than four occasions when Seretse spoke powerfully. Oyelowo just has one of those voices; one of those screen presences. It did not surprise me to learn, yesterday, at the Gala Opening of the London Film Festival that he and Amma Asante have known each other for 18 years; she seems to know her subject intimately, and doing so helps her coax a performance of great emotional intelligence out of him.

The path of true love never did run smooth, but for Seretse and Ruth, it's considerably less smooth than usual. The two main characters never wallow in self-pity, but instead conduct themselves with the grit and resourcefulness that all pioneers of history need. Some of the scenes where their relationship is met with opprobrium are difficult to watch, such as when Seretse is racially abused by some yobs, who then call Ruth a 'slut'. But such scenes are only reflecting what actually happened. The way the director and writer, Guy Hibbert, retain the impact of these scenes without sensationalising such events, is impressive.

After baring her teeth in Gone Girl, Rosamund Pike is reliably great in a role closer to her typical habitat, playing the sweet Ruth Williams. She's terrifically still in the majority of her scenes, projecting a calm exterior, but the occasional tell-tale sign of body language (for example, a shaking arm) indicates that her character recognises the full force of what she's gotten herself into by marrying the Prince of a small nation and she’s terrified, yet, no matter how difficult, she's robust enough not to give up.

The supporting players are all well cast, some of the standout performers being Draco MalfoyTom Felton as the villainous Rufus Lancaster (incidentally, he also played a bigot in Belle), Jack Lowden perfectly embodying Tony Benn’s social conscience (Benn’s first introduction in the film was met with a delighted gasp by the audience), and Only Fool's and Horses' Nicholas Lyndhurst as Ruth's disapproving father.

A United Kingdom also delivers an important history lesson about the apartheid in South Africa and the not-so-blameless role Britain played in enabling it, although it affords gratitude towards the trailblazers who were bold enough to stand up against what was clearly not right. The film also has more levity than you would expect in one about such a weighty topic, and towards the end, when Seretse delivers a glib one-liner (that was delivered to him earlier by Jack Davenport’s slimy government official), it was met with applause in the audience.

Amma Asante has made the first film of 2016 to blow me away. A United Kingdom is a testament to the redemptive power of love, and how in the face of hatred and small-mindedness, as long as the couple love each other, this love will triumph over hate. Admittedly, such a moral is hardly revolutionary, but delivering the message with this true, remarkable story, of two remarkable people, and such talented cast and crew, who clearly moulded this picture with love, renders A United Kingdom a lovely experience.