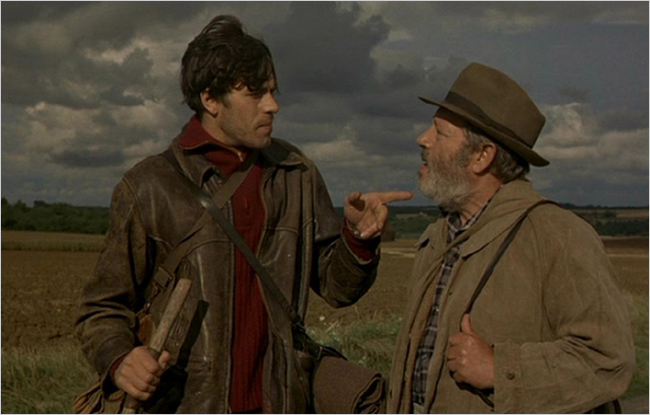 Luis Buñuel'a irreverent send-up of Christianity sees Pierre (Paul Frankeur) and Jean (Laurent Terzieff) embarking on a religious pilgrimage from France to Santiago de Compostela in Spain. Along the way, they come a series of unexpected events, from walking in on a ritual from a secret sect, being asked to moderate a duel, and a chance meeting with the Grim Reaper.

La Voie lactée's surrealist elements and indictment of Catholicism render it classic Luis Buñuel, but  neither of these two components were employed terribly effectively. As in Tristana, I found the dream sequences distractingly low-quality, and because the whole file had a trippy vibe, it was difficult to delineate the fantasy sequences from the actual storytelling. The cutaways didn't add anything to the narrative, and, perhaps because I'm treated due to shows like Family Guy, I usually expect my cut-aways to be, you know, funny. Here, they were met with a *tumbleweed*-style reaction.

The Catholic Church offers ample material for mockery, and having their teachings torn apart, something that Pedro Almodóvar does effectively in several of his films. He achieves it by writing characters such as a shady priests into various stories (e.g. La mala educación), and then allowing the plot to unravel as the hypocrisy and corruption of said characters are exposed. That way, the audience sees these people for the monsters they are, whilst recognising their religious background played a formative role in this. We have been shown, rather than told.

But in La Voie lactée, the speeches delivered by characters in this film by preachers and brainwashed kids, written in such an brazen way so as to make the deliverers look stupid, felt like the audience was being spoon-fed to laugh at these characters and ridicule their beliefs. The contradictory things they were spouting were too out there and nonsensical for it to be plausible that the character believed in what they were saying. 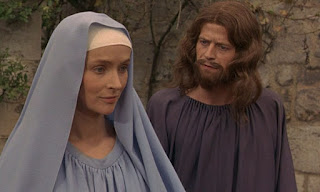 The closing titles of the film, which laid out all the problems with religious dogmas, epitomises Buñuel's heavy-handed approach:  if the film had done its job properly, the audience should already know this. They wouldn't need it rammed down their throat. This complete lack of nuance meant I was, lamentably, not able to enjoy this film as much as I would have liked to. (I like ridiculing religion as much as the next person!)

However, as with previous Buñuel titles, I was still amused by the film, and scenes which were darkly comic and the audience unsure whether or not to laugh meant we were kept on their toes. One vignette, where a woman lies on the cross and has her hands pinned to it like Jesus Christ, was visually discreet but made an arresting impression. And the benefit of having so many short scenes, pieced together in a sketch-like way, meant that the viewer was at least, never bored.

I wouldn't classify La Voie lactée as Buñuel's best work. But it's a curious entry into his filmography that his aficionados might derive more enjoyment from than I did.