My second film viewed at the BFI London Film Festival, a surprising choice for me, a horror movie!
--

Francisca lives an unusual but tranquil life with her reticent father and hands-on surgeon mother, who teaches her all about dissection, secluded from the test of the village. One day, her sheltered upbringing is rocked when a man purporting to be a salesman murders her mother, thus triggering and endless sense of longing, as well as morbid curiosity about the human, within her. This fascination with human bodies and a desperate need not to be alone manifests itself in devastating ways.

In Francisca, you have a beguiling protagonist, whose motivations for her destructive actions are not jammed down your throat with a ham-fisted tale of past tragedy, but instead, hinted at in Kika Magalhães's haunting performance. Throughout the film, and whilst carrying out villainous acts, her character maintains a placid, almost cold facade. Yet the more intimate scenes where she speaks to her dead mother, betray her true vulnerability. The film's ability to make us empathize with such a monstrous character really cannot be applauded enough.

It helps that Magalhães, who was consulted by Pesce throughout his screenwriting process, also got to inject parts of herself into the character she portrays. In a scene where she dances freely to a piece of music, this was one of the actress' mother's favourite pieces. Having this personal touches injects flavour into Magalhães' mesmeric performance, a welcome subversion of how females in horror movies are usually presented.

The black and white cinematography, selected because director Nicolas Pesce wanted to homage the movies of the 1950s that he adored (in a Q&A following the film, he revealed a penchant for Bette Davis and Joan Crawford, good man) suits the stark, bare set, and effectively conveys Francisca's heartbreakingly bleak view on the world. The jarring score adds to the sense of dread and discomfort that builds steadily throughout the film's 76 minute running time.

Nicolas Pesce, like Quentin Tarantino, is a director who loves films. His influences are peppered throughout the film, from the keeping a person barely alive held captive (evoking Takashi Miike's disturbing Audition), to the Alamodovarian underlying theme of the importance our parents play on our formation. Also like Quentin Tarantino, who's dextrous employment of the 'conceal and reveal' in Reservoir Dogs, Pesce fully understands that the best way to unsettle the audience is to not show them the darkest moments, but to leave it to their imagination. 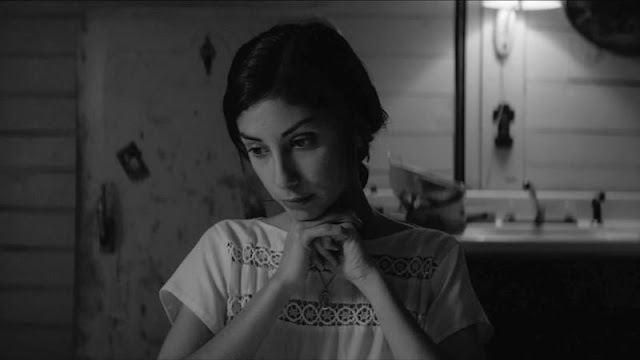 Although Francisca's actions throughout the film are horrifying, the depiction of these are afforded surprising economy of expression; a murder will be indicated with a puddle of blood shown on the floor. The jumping from the serial-killing to the mundane also creates some off-kilter tonal jumps that evoke nervous laughter in the audience. However, there are some arresting images in the film, which impacts on a strongly visceral level.

Overall, The Eyes of My Mother is one of the most intelligent, haunting horror movies created. Pesce (who, depressingly, is only 3 months older than me) deserves a huge amount of credit for subverting the hoary horror movie tropes and put his own organic spins on them. In doing so, he has created Francisca, an enigmatic murderess for the ages.