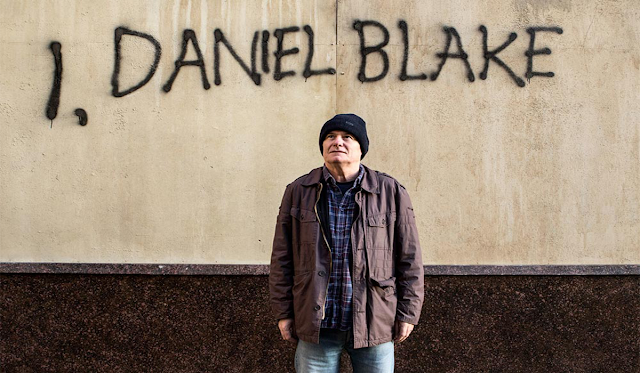 Geordie Daniel Blake (Dave Johns), a lifelong carpenter who's recently suffered a stroke, is signed off work by his doctors and physios. He's a determined chap, who's unafraid of graft and unfazed when his neighbour tells him that many before him have given up due to the countless hoops they have to jump through to get Job Seekers' Allowance. But Dan soon finds that the behemoth bureaucracy facing him as he tries to sign onto JSA proves to be a more arduous task than any physical challenge he's ever been given.

He meets Katie (Hayley Squires), a single mother of two who has been relocated from London as Newcastle is the only area that can house her family in a fracas at the Job Centre. The two form a bond and Daniel's easygoing personality wins the affection of Katie's two young children. Katie tentatively tells Dan of her plans to get a part-time job and pursue an Open University degree. For the briefest of moments, the film hints at deliverance.

But sadly life isn't like that. Katie forgoes dinner in order to feed her kids and has to resort to less than ideal methods just so she can buy necessities like deodorant. Meanwhile, the Job Center continue to make Daniel jump through unfeasible hoops in order to procure his allowance. He tries to tackle every task, such as learning to use the computer, in a workmanlike fashion, but his efforts are slammed for not being good enough.

Wry laughs pepper the film. Dan's straight-talking bluntness and his endearing attempts to tackle technology are amusing, but even these funny scenes are underscored with sadness. After days of trying to sign up to JSA on the computer to no avail, his friend prints out a form the Job Centre could have easily handed to him. Ken Loach's point about the nebulous directions of those In Charge could not be clearer.

I, Daniel Blake is a tremendously affecting, and illustrates the power of narrative cinema, when effectively handled. After all, reading an account of how some families live below the breadline in the newspaper may evoke an 'ah' from the reader, or in some cases, aversion at being preached at. But watching Daniel and Katie's daily struggles is harrowing; the sight of Katie eating baked beans from the tin out of sheer hunger in the film's most devastating scene, set at a food bank, says more than any amount of column inches could. 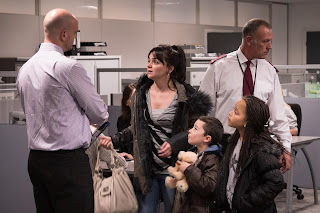 I, Daniel Blake illustrates what real problems are and makes the audience grateful for their lot. Dave Johns, Hayley Squires and the rest of the (unheard of) cast all give authentic, natural performances, and the dialogue between characters feel organic. You come to really feel for the central characters: Daniel just wants to be treated with respect, something the Job Centre who regard him as currency, don't afford him, and Katie, who's stoic parent would endure anything to provide for her kids. The level of pathos she incurs as she tries to fulfil this is almost unbearable.


There are a few minor missteps-- Daniel's neighbours' attempts to flog imitation trainers was an amusing sidenote, but added nothing to the film other than giving it some temporal grounding (a character refers to Charlie Adam's goal from the halfway line against Chelsea, setting the year in 2015. Stupid Courtois) The hagiography of the entire working class and depiction of everyone in management as pedantic fools obsessed with keeping Daniel trapped in the Kafka-esque web of 'The Decision Maker' was anything but subtle. Life isn't quite as black and white as that. I also felt the film ended a little abruptly, although this must have been a conscious decision on Loach's part to deprive the audience of closure, which would have been dishonest.

To its credit, the film avoids the temptation to sensationalise poverty, spoon-feeding the audience sanctimonious platitudes that might turn them off such a film and have them rolling their eyes at the contrivances on screen. Plenty of films have been guilty of going overboard in depicting the descent to hell to the point that it felt like the director was taking sadistic relish from piling on the misery. Darren Aronofsky's Requiem for a Dream immediately comes to mind.

But Ken Loach's unfussy, raw directorial approach lets the unflinching gaze of real hardship the characters are put through do the talking. A sobering, heartbreaking watch, but a topical one.

eToro is the ultimate forex trading platform for beginner and advanced traders.