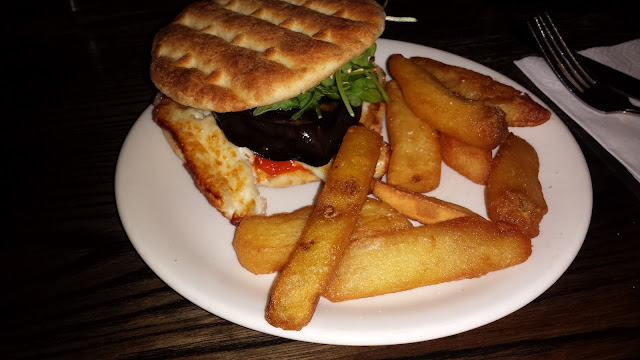 Mildred's doesn't take reservations, which almost instantly signals alarm bells to me. The only place that has been an exception to the 'Places which don't take bookings offer terrible service to their diners' has been the excellent On the Bab; everywhere else which doesn't take bookings has shown, quite starkly, that if they don't care about making customers stand in the freezing cold waiting to get fed, they definitely won't think twice about ignoring you if you require the waiter's attention. Mildred's, lamentably, didn't go any way towards disproving that prima facie.

Mildred's is a vegetarian restaurant in Soho, and it will feed you, but, unless you make over £100,000 a year, wear an Armani suit and stockpile the alcohol order, the waiters will look at you like a piece of trash and act like you ought to be grateful that they're gracing you with their company. It also squashes all their punters in like sardines so they can maximise revenue, meaning that the sound of other people's conversations regularly intrude on the one you're conducting.

The burger was reasonably priced at £7, but the chips, which at £3 for twice as much photographed above, felt like a bit of a con. The waiter practically sneered at me and my friend when we said we were going to share a portion of fries, which was not cool. Excuse us for having the audacity to order food of our own volition(!)

I would be lying if I were to say I didn't enjoy my burger; it was plenty tasty and the texture was on point. I liked the enterprising display of flatbread rather than a bun. What a shame then, that the snooty service I'd received from the waiter, who clearly took one look at us and decided we weren't his income level of choosing, had left some a sour taste in my mouth. When we left the restaurant, they didn't even say 'goodbye', but instead, just threw us a 'and don't come back again' look.

I also don't appreciate the presumptuous way they stick on a 12.5% service charge. The service we received at Mildred's (being eye-rolled at, having our requests for water and serviettes all but ignored) was non-existent, bordering on counterproductive to our dining experience. The only beneficial contribution our waiters made were to carry our orders from the kitchen to our table without dropping it. A bit of a stretch at 12.5%, if you ask me.

If you're looking for decent vegetarian nosh but would rather it didn't come with a side order of hauteur, I'd recommend you go to the nearby Tidbits instead. There's a much more down-to-earth, hospitable atmosphere there.