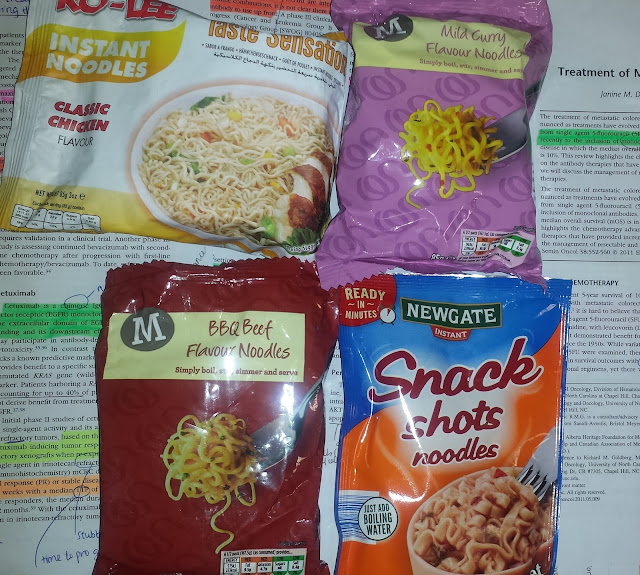 For me, one of the most memorable parts of Amy Dunne’s mordant ‘Cool Girl’ diatribe in Gone Girl was when she declared ‘because Cool Girls are above all, hot." This comment is delivered in relation to how she kills herself in order to stay a lithe, desirable size 2 (UK 6/8), to little appreciation from her perfidious husband, Nick.

Given that Amy is generally perceived to be a murderous psychopath, I probably shouldn’t pay this line too much heed, but for some reason, it’s really resonated with me, and as such, I’m trying hard to watch my weight.

The first step towards losing weight and eating healthier was to stop having so many lunches at McDonald’s. A substitute I explored was easy cook noodles, and thus, here are my thoughts on five different types I’ve sampled recently.

Morrisons BBQ Beef noodles 85g, 25p
There was nothing barbequey or beefy about the taste of this, I’m afraid. The noodles came out stale and tasteless, and even the liquid it was boiled in didn’t have any particular flavour. The very cheap price signals to me that this is predominantly marketed at students, although if students eat this before a night out, the lack of nutritional content means their stomachs will be insufficiently lined pre-heavy drinking, and it could well result in them chundering out their dinner. Considering how it purports to be one of the more filling of the four (total calories: 466, apparently), it doesn’t do what it says on the packaging. 2/10.

Morrisons Mild Curry flavour noodles, 85g, 25p
Gar. Another ghastly Morrisons creation. As with its predecessor, it has thin noodles that tasted of nothing and a sauce which didn’t taste remotely of curry (at least they spoke truth about the ‘mild’ part, mind). The mild curry flavour noodles purports to have 458 calories in the entire bag and it did make more of a dent on my hunger levels than the ‘meal’ from the day before, so I’ll give it +1 mark for that. 3/10. 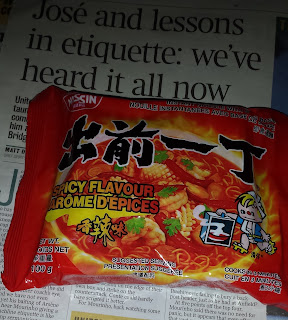 Unlike the two Morrisons travesties, the Nissin Demae Ramen noodles were deliciously thick and unrepentantly eggy. The sauce the pack yielded had flavour too! Whilst it wasn’t the burn-your-tongue-off levels of spiciness that the bright red packaging might lead you to think/dread, it was sufficiently hot to satiate my need for spiciness. What’s more, this bag came with a sachet of the sauce as well as sesame oil, which gave the meal a welcome kick. Plus, you’ve seen my cooking – you know how much I dig my oil. 8/10.

Newgate instant snack shot noodles sweet and spicy 67g
This Lidl product weighs less than the three easy cook noodles I’ve appraised so far, and as such, is lower on calorific content. On the bright side, the dried flavouring that came in a sachet for those other three, which could lead to a slight mess, was embedded in the noodle here, meaning you could avoid any pouring mishaps. The noodles here came in a strange angular shape, and were even thinner than Morrisons ones, but had more noodle length to atone for it. After you’ve finished with the noodles, I’d recommend re-filling the bowl/mug with boiling hot water, because the solid flavouring is concentrated enough to make a nice brew out of it. Not that filling, but tastes good whilst it lasts. 7/10.

Ko-Lee Taste Sensation Classic Chicken flavour 85g, 28p
For just 3p more than the two disappointing Morrisons own brand noodles, you can get this in the same store, and it’s much more filling and appetising. As with the other Chinese-style noodles, the Nissin Demae, this also comes with a small sachet of sesame oil, as well as a pack of dried flavouring that far exceeds the quantity in any of the other four noodles assessed. The resulting liquid brew is a nice concoction for you to savour, which redeems the (once again, common to Morrisons) thin, bland-tasting noodles. 7/10.

Common to all of these five products was a real ease to use, as the names suggested. You're supposed to boil them over the hob, but I found putting half the amount in my Chelsea mug and applying hot water to it, as pictured below, was just as effective, and saved considerably on the washing up! 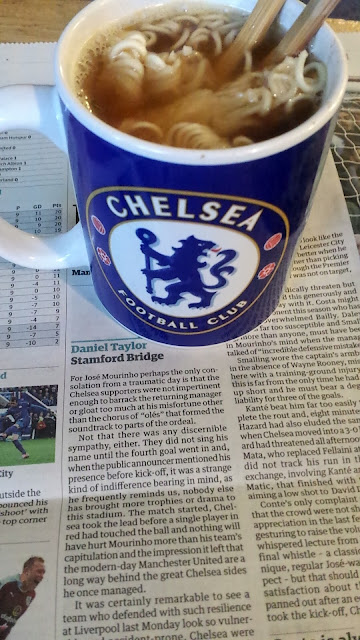