Film review: THE MAN WHO COULD CHEAT DEATH (Terence Fisher, 1959) 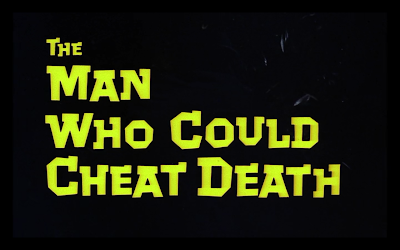 One of Hammer Production’s lesser-known titles, The Man Who Could Cheat Death stars Anton Diffring as Georges Bonnet, a distinguished sculptor who courts admiration and envy in equal measure from his peers. This talented artist isn’t what he seems, however, harbouring a gruesome secret: he is actually 104 years of age, and replenishes his youth by swapping his thyroid with that from other living humans.

The 1959 film, typical to its Hammer horror roots, doesn't feature the best production for its time and compared to the hyper-realistic CGI effects of today, they come off even worse. But once you accept the film’s limited resources and recognise it for what it is, the plot holds its own and grips you. 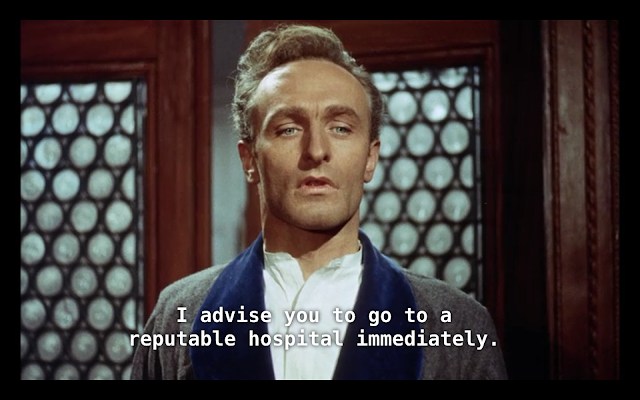 Diffring, draughted in at the last minute due to the unforeseen dropout of Hammer horror specialist Peter Cushing (the actor, deceased for 22 years, was recently seen in digitally restored form in Rogue One), is watchably evil with suitably villainous features that serve him well, especially his bug-like eyes which appear almost cartoonishly engorged in the film’s most sinister sequences.

A young, far more dashing Christopher Lee convincing acts as a foil to the dastard protagonist as a young surgeon who is vying for the affections of the same woman as the 104-year-old. His quest to uncover Bonnet’s ill-doing is to stop him from repeating his monstrous acts on future prey, but he's extra-motivated due to personal reasons, thus giving their unspoken duel some added spice. Moments of black comedy pepper the film, including a scene where a makeshift surgeon swigs on some alcohol before preparing to operate, offering periodic respite from the drama.

Overall, the ending will surprise few but the film doesn’t outstay its welcome with a running time of 83 minutes, a stark contrast to the laboured lengths of modern movies. Overall, The Man Who Could Cheat Death plays like a less salacious, more tightly paced offshoot of The Picture of Dorian Grey. A serviceably entertaining watch for you as you struggle to move after a bloating Christmas dinner.