A few bits of BBFC geekery when I was doing Christmas shopping yesterday. 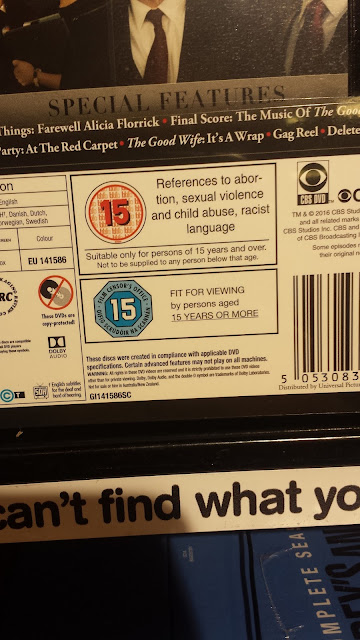 From the DVD boxset of the final season of The Good Wife. A bit on the descriptive side! 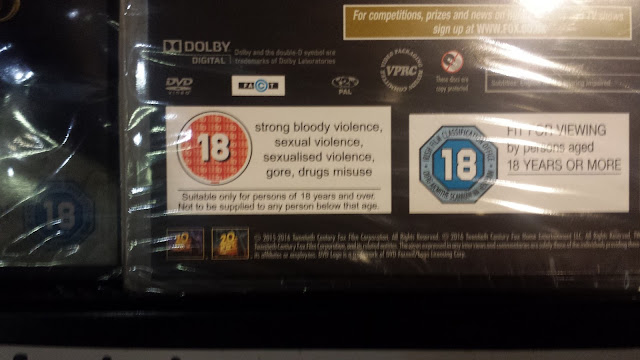 From American Horror Story: Hotel's boxset. Notice the distinction between 'sexual violence' (i.e., rape) and 'sexualised violence' (the conflation of violence and sexual images, e.g. a stabbing during a sex scene).

Not gonna lie, reading this tells me I'm right in my convictions never to watch an episode of this scabrous show! 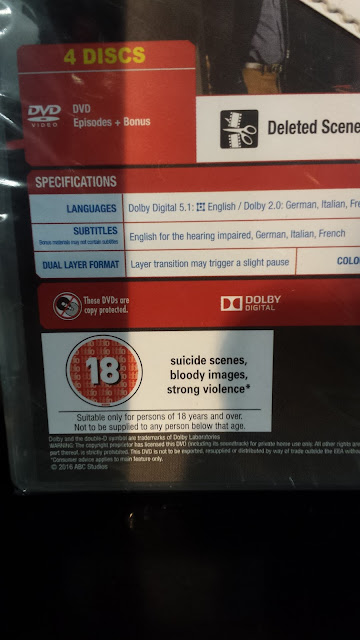 This is from How to Get Away with Murder. I was quite taken aback by this; all I know about this show is that Viola Davis is in it, and she is typically excellent. I was not expecting it to be an 18 cert! A quick glance over the American TV rating (TV-14), tells me that this might be the BBFC being weirdly strict.

Two other TV shows that I've noticed are TV-14 in the States and 18 over here are The 100 and Scandal. A telltale sign that a show is aiming for the TV-14 market when you're watching is extensive sexual dialogue and maybe even steamy sex scenes featuring nudity, but not once does anyone say the f-word (this also applies to many a TV-14 show that have gotten 15 over here, such as the aforementioned The Good Wife).

I find it amusing that you can put quite a lot of adult content in a TV-14 and get away with it, but once you say 'f_ck', that's when you cross the line into TV-MA... 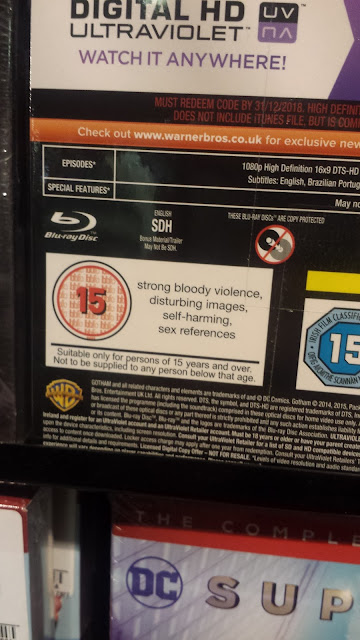 From Gotham's boxset. Again, I was just amused because of the juxtaposition of those four disparate classification issues. 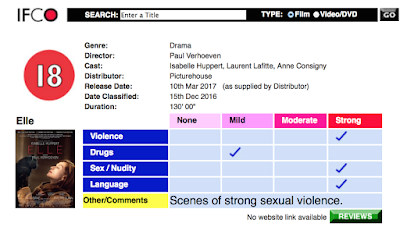 Whilst the BBFC are playing hard to get with regards to their rating of Elle, for which Isabelle Huppert is gaining Oscar buzz (I know I haven't seen it yet but I really hope she wins!), their Irish counterparts aren't so coy, and have released it with an 18. Given that the two awards bodies more often than not align, I'm guessing that this will be my second 2016 release that I've seen of an 18 cert! I've been very lax with watching 2016 releases of this rating; the only other has been The Neon Demon.

By the by, I noticed in HMV yesterday that on the occasions when the BBFC and IFCO don't agree on a film, they just bung the British rating on the front (otherwise, they put both, side-by-side): 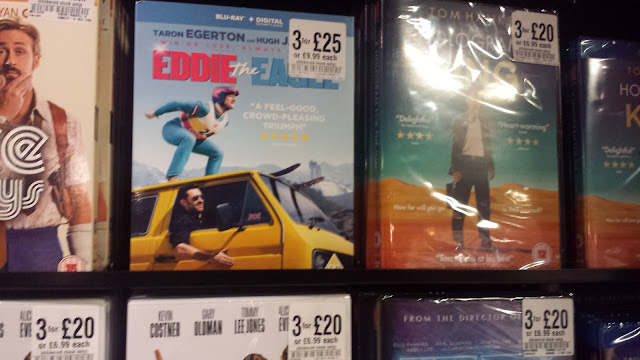 Eddie the Eagle is a 12 in Ireland and A Hologram for a King is 15 in Ireland. I think this precaution is sensible; you wouldn't want to confuse buyers!

Finally, I have no intention of watching this, but, nice wall mural for Assassin's Creed: 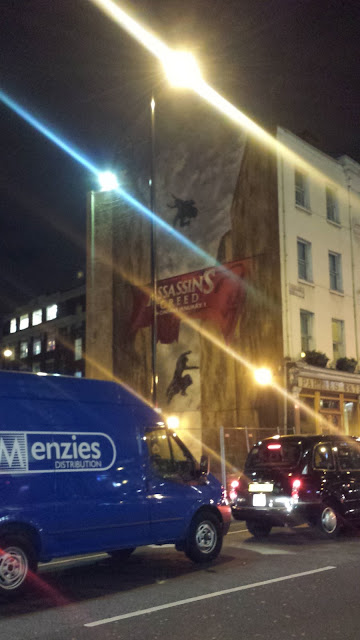 This same wall has also hosted Star Trek art in the past as well!

If you would like an alternative to casually approaching girls and trying to figure out the right thing to do...

If you'd prefer to have women pick YOU, instead of spending your nights prowling around in crowded pubs and restaurants...

Then I encourage you to view this eye-opening video to learn a strange little secret that might get you your own harem of beautiful women: