Sausage Party should NOT have been rated 15!! 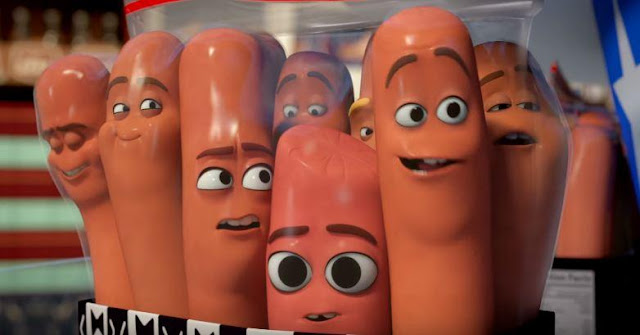 I wasn't the biggest fan of this film (5/10 for me), which is somewhat surprising given I love crude, non-PC humour a la Family Guy, and the Hollywood cast behind it was eye-watering. But I found SP ludicrous, try-hard, thinking itself cleverer than it was, as well as committing the cardinal sin of comedies: being unfunny.

The dialogue, for starters, felt forced, like they were trying to beat some record for the amount of f-bombs in a movie. The screenwriters inserted 'f_ck' into almost every line of dialogue and as such, it lost its impact. It also led the script to feel somewhat clunky; contrast that to the swearing in Martin Scorsese movies. In some of his films, the curse words come thick and fast, but you buy it, because it feels organic, and part of the character and the way they speak. With SP it just felt like they were trying to be edgy.

I didn't laugh at many of the jokes. I thought the scope was too ambitious - trying to cover racism, religion, and analogising each race to foodstuffs (how utterly groundbreaking), as well as having an underlying story about sausages discovering the truth about what happens to them. The weird plunger who kept wanting to get revenge on Seth Rogen and Kristen Wiig's character was creepy A F, didn't like him.

But I'm not here to rant about Sausage Party. It's doing well for itself at the Box Office, and you can't begrudge Seth Rogen and Evan Goldberg for that. What didn't do it for me, is clearly doing it for many other cinemagoers.

No, I'd like to discuss how on earth the BBFC gave Sausage Party a 15 certificate. There are two main classification issues that I thought should have taken it to an 18.

1. The male-to-female usage of the c-word
in the following discussion, when I refer to 'cnut', I'm actually talking about the word with the n and the u switched around.

The f-word itself is not enough to elevate a 15 to an 18, no matter how many times you say it. And you can actually say 'cnut' quite a few times in a 15-rated film (from the BBFC podcasts, I believe the record number of c-words you can say is seven or eight), depending on the context.

But single uses of the c-word can lift it from a 15 to 18. I'm thinking of Sleeping Beauty, not the Disney classic, but a dark tale of a girl who lets men pay her to do whatever they want to her whilst she's asleep. There were three issues contributing to the 18 certificate there, but if you read the report I linked, one of them was an 18-rated use of the c-word, which was directed aggressively towards her whilst she's asleep. There's another such anatomical use of the c-word, directed from a man to a woman in François Ozon's similarly themed Jeune et Jolie, also an 18.

So the BBFC are pretty squeamish about male-to-female uses of the c-word, because of the misogynistic overtones, as well as the fact that men are generally taller and stronger than women, so the utterance of the c-word adds to an element of 'imbalance of power'. One episode of Californication was thus put up to 18 because a lady was called a 'f_cking cnut' by a drunk man because she accidentally bumped into him.

Similarly, one of the two issues that got Gone Girl its 18 rating was when Ben Affleck calls Rosamund Pike a 'f_cking cnut' repeatedly, to which she replies defiantly, 'I'm the cnut you married'.

Off the top of my head, one film which was passed 15 despite containing a male-to-female usage of the c-word is in Frank, when Domhnall Gleeson calls Maggie Gyllenhaal one. But that scene is resolved immediately in a comic manner to show that she hasn't taken offence, quite the opposite, it's turned her on, and in that case, the impact is greatly reduced.

Anyway, back to Sausage Party, which contained three uses of the c-word. Two of them were uttered by Edward Norton's bagel, and he's either referring to himself or another man, so they didn't bother me. His character has ongoing beef with a lavash called Kareem (Seth Rogen's laboured metaphor for the Israel/Palestine conflict), so one of the c-bombs was him calling Kareem that under his breath, pretty expected.

The third c-word, however, said near the start of the film, is delivered by Jonah Hill's sausage about Kristen Wiig's bun, after she's shown him up in front of everyone. He turns to Seth Rogen's sausage (Wiig's boyfriend in the film) and says 'Dude, um, how do I say this to you gently? But your girlfriend, um... She's a fucking cnut.'

Sidenote: we already know Jonah delivers the c-word with relish:

Given all the examples I've just given of films taken up to 18 because of male to female uses of the c-word, and what the BBFC repeatedly state themselves on their podcasts (which I have listened to over and over many a time on my commutes, how do you think I can just reel off examples off the top of my head?), a man screaming the c-word at a woman is likely to take the film up to an 18.

I get that Jonah's sausage didn't scream it in this scene, and he was also saying it about a woman rather than to her (although she was within earshot) but the matter of fact way in which he said it, the fact that misogynistic abuse was being played for laughs, meant that the BBFC should definitely have thought about the suitability of such language within a 15-rated framework.

Firstly, I totally get that you can show quite a lot of sex in 15-rated films. Blue Valentine, Monster's Ball and Black Swan are held up by the BBFC as the upper bounds of sex that will be allowed in a 15; the former two flirted with the Kiss of Death rating, the NC-17 in the States, yet didn't even get the highest 18 certificate here.

(Interestingly, La mala educación, which, whilst being nowhere near Pedro Almodóvar's most explicit film and comfortably placed at 15, got NC-17 in the States. This is because the MPAA rate homosexual love scenes with a different yardstick to heterosexual ones, something that the BBFC, who treat all sex scenes equally, don't. Basically, the MPAA be hella homophobic).

The reason Blue Valentine and Monster's Ball had their sex scenes rated 15 despite being quite long and featuring mechanical thrusting motions, is, as argued by the BBFC in their podcasts, the crucialness they play to the plot of the films, as well as both movies featuring sex in the framework of a loving relationship.

It is for this reason that the BBFC are stricter on group sex scenes, even if the detail is minimal. The last Lindsay Lohan movie I saw, the 18-rated The Canyons, contained a ménage à quatre scene, but although there were some impressions of what was going on, it was so dimly lit that all you saw were shadowy movement. Because the shapes were so dark and vaguely made out, this group sex scene lacked the intimacy of something in, say, Blue Valentine.

Similarly, Straight Outta Compton: Director's Cut was rated 18 (the theatrical cut was a 15) due to one such scene, even though the BBFC's Irish counterpart, the IFCO, rated the Director's Cut a 15, and the Irish film board, whilst matching the majority of the BBFC's decisions, tend to be harsher with sex scenes overall. For example, some of the sex scenes that the BBFC allow at 12, the Irish rate 15. This tells me that the content of the Straight Outta Compton: Director's Cut scene couldn't have really been that strong, or else the Irish would have followed suit in rating it 18.

I was traumatised by that scene. The audience around me loved it, laughing their heads off at every frame, but honestly, I just thought it was tacky. And like I've said before, it's hardly like I'm epitome of highbrow; I usually find crude humour hilarious. But this was too much. And definitely too much for a 15 certificate.

I know the BBFC will just say that 'oh but it was with animated foods, it's not like it's humans' , but these foods are given anthropomorphic (foodthropomorphic?) qualities, so that argument doesn't really wash with me. They had arms, legs, faces, voices, and quite clearly, sexual libidos. To palm the explicitness of that sex scene off as 15-material just because they were cartoon sausages and buns is irresponsible, and irresponsible is not a word I often throw at the BBFC [I usually think they're too cautious].

Long post was long, I know. But Sausage Party should not have been a goddamn 15. I'm sure Seth Rogen and Evan Goldberg would have embraced the 18 certificate had they been given it, and taken it as a badge of honour in terms of what it said about the film's filth. Because it was filth, and 15-17 years old should not have been allowed to see it. 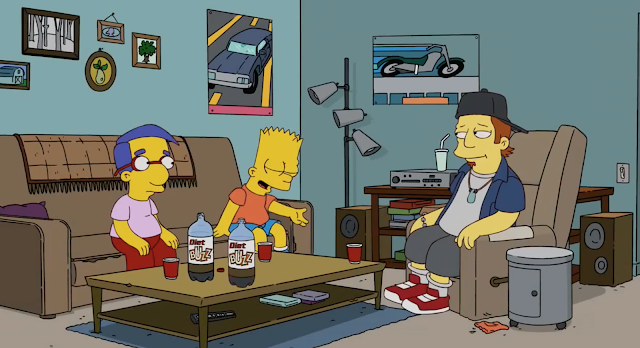 maybe I just wrote all this because I watched Sausage Party almost exclusively for Jonah Hill (just like the cartoon pictured above), and the film was ultimately disappointing. Here's hoping that Kubo and the 2 Strings, which I'm watching tomorrow for Rooney Mara, won't follow in SP's crappy footsteps.
Posted by Emma at 9/10/2016 11:46:00 am

A fellow blogger suggested that I contact you regarding my upcoming blogathon. She said that you maybe interested in participating, so I thought I'd drop by to invite you to join in. Anyway here is the link to the blogathon with more information.

Your sense of humour is prevalent in your writing, great work! People,feel free to check out my blog if you're into literature

Thanks so much Feathers! I sure will. :)