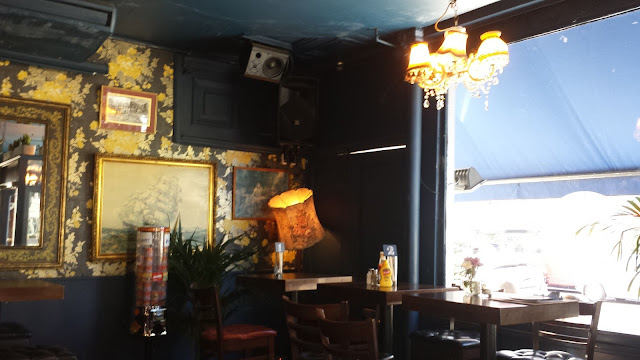 Grand Union was relatively easy to find (we walked over from Camden Town Odeon, which is itself very close to Camden Town tube) from the station. It’s very spacious, and (pleasingly) surprisingly empty on a Sunday, meaning that finding somewhere to sit isn’t a problem, and there are comfy sofas aplenty. The décor was quirkily mismatched.

During Happy Hour, the cocktails are decent value for money at 2 for £10, although without the Happy Hour, I wouldn’t touch them (to be fair, I only ever have cocktails if it’s part of some deal, else they seem too much of an extravagance and I plump for beer or cider instead), so this isn't a criticism singular to Grand Union. 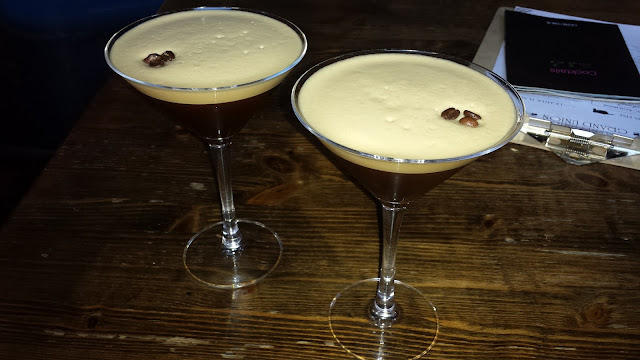 The espresso martini had a good blend of caffeine and alcohol and the Long Island Ice tea was boozy without being too potent (LIIT is a dangerous gateway drink to chundering on the curb). Graciously, this time ingesting LIIT did not lead to any kind of vomiting, as the waiter who prepared it made sure not to go overboard with the alcohol. The 2 cocktails for £10 deal is valid all day on a Sunday, so if you're going to visit Grand Union any day, make sure it's then! 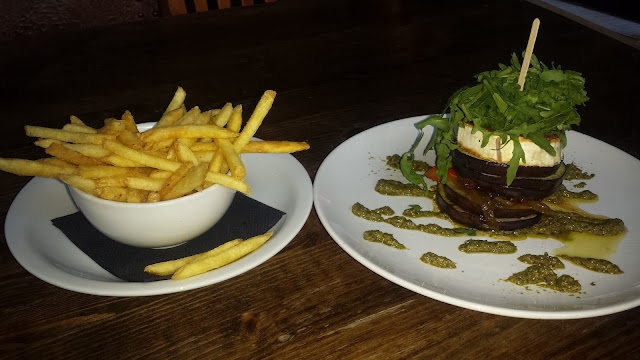 In terms of the food, I wasn’t too impressed. The vegetarian platter, photographed above, had aubergines which is one of my least favourite ingredients. Admittedly, I was partially at fault there, for ordering it without properly checking out the ingredients, but even if they were going to include aubergines, they could have made the rest of it good. As such, it was just a couple of pieces of vegetables stuck insipidly on top of each other, and bound together with a toothpick and an egg thing which didn't taste that good either.

Chips also came with the vegetarian platter, but they were miles away from the delicious chunky chips I’ve had at other pubs, or even the French fries of McDonald’s. They could at least have come with some herb mayonnaise to dip into, or something! Hardly the pinnacle of vegetarian dining, especially for £9.

Overall, the menu was quite uninspired in terms of finger food; I would have liked just a little more in the way of choice. 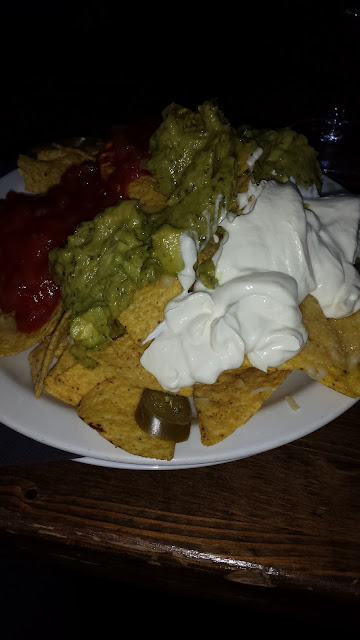 At least the nachos were nice, although again, a touch overpriced at £10.

Whilst I thoroughly enjoyed my stay in Grand Union and was a good level of tipsy from the cocktails, there were two things that could have made my visit better, which I shall mark Grand Union down for, somewhat unfairly given the managers can only really be in control of one of these things.

The first was the overpriced, mediocre vegetarian platter. The second were a group of raucous girls sat adjacent to us, who were a tad loud (I daresay they were drunk) and not aware that their boisterousness was borderline intrusive to neighbouring people's personal space in terms of noise.

A bit churlish to down-rate Grand Union for that, I know, given you can’t police your clientele, but that’s just the way the cookie crumbles.