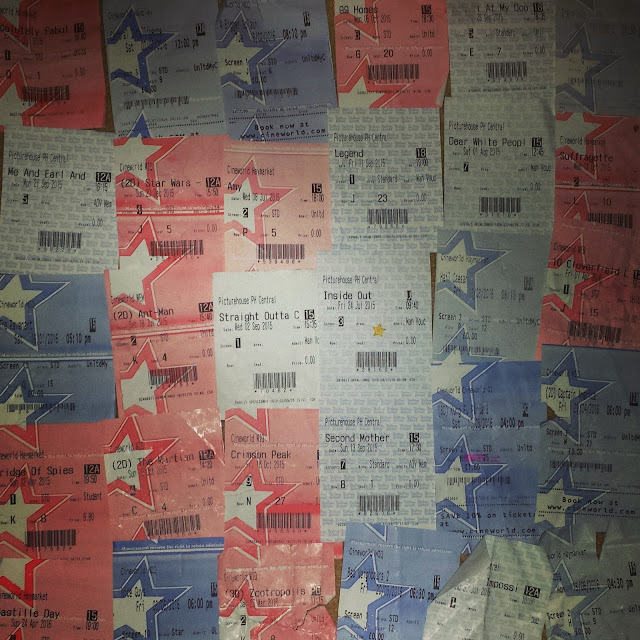 Last July, after got my MSc Summer exam results and I fared better on them than I was expecting, I treated myself to a Year's Cineworld Unlimited card subscription as a celebratory impulse buy. I figured it would be win-win, as I study in central London, which is quite close to several of the Cineworld cinemas, and I was planning to revive my dormant blog in 2015-2016 as it was the year that Leonardo DiCaprio would finally win his Oscar, so I figured I'd have a tonne of online fangirling to do.


Well, I was half-right. Leo did win the Oscar for The Revenant, and such is my affection for his acting work in William Shakespeare's Romeo + Juliet, The Aviator, Titanic, The Depahted, Blood Diamond, The Wolf of Wall Street, Django Unchained, Catch Me If You Can etc etc etc that I would never for a second entertain the thought that it was undeserved. I feel he was the best in his category (hey, it's not my fault Jacob Tremblay and Andrew Garfield weren't nominated), and even if him rolling around in the mud for 2.5 hours isn't a fraction as good as, say, his physical comedy in the Quaaludes scene in WoWS, I was delighted my man finally got his trophy.

But such was my ambivalence, nay, downright antipathy towards Alejandro González Iñárritu's thirsty Oscar-begger overall (don't know if you heard, it was a cold shoot. And Leo had to eat RAW BISON LIVER #thirst), that The Revenant, and all its awards buzz, made me a little reticent in the Oscar race, and as such, I wasn't quite as prolific with my film-critque as I was in 2008, when I was earnestly campaigning for Saoirse Ronan to win for Atonement, or 2009, when I declaring my love for Slumdog Millionaire from the rooftops, etc.

Anyway, I digress. The purpose of this entry is to review the Cineworld Unlimited card. I shall start with the pros: it was extremely easy (and versatile) to use. I could book tickets on the day of the film at the cinema desk, or, if it was a film I felt might sell out (for example, Captain America: Civil War was one of the movies I saw on the day of its release), I could pre-book tickets online. You could also book tickets for friends, and my friend Anusiya has an Unlimited card too, and we were able to book for each other, no problem. 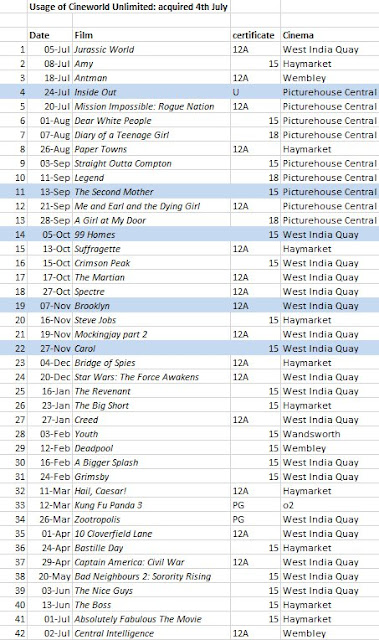 I visited several central London cinemas (and a few suburban ones) in my year on the Cineworld Unlimited card, and the cinema which I enjoyed the most was, unsurprisingly, the newly-built Picturehouse Central. It was so plush, polished and sleek; I absolutely adored watching films in there, even if the picture was crap, like Legend. What's more, when Picturehouse Central had just started out last Summer, they had particular films where if you watched them, you could get a free drink/popcorn/poster. So if anything, they were treating you for going to that cinema! I loved it.

Unfortunately, Cineworld Unlimited holders were only eligible to watch films at Picturehouse Central for free until the end of September, after which they had to pay a £5 uplift. I was damned if I was going to shell out £5 a movie when I'd paid in excess of £230 to watch as many films as I wanted for free.

And so, I set up cinematic digs mainly at Cineworld West India Quay and Haymarket, both of which were fine; perfectly functional. I've actually had a Cineworld Unlimited card in 2006 (when my blog was first incepted) as I'd come Runner-up in a Young Film Critic of the Year competition, and I must admit I gained some sweet nostalgia from using a new Cineworld card in the same place, some ten years on. Some highlights of my cinemagoing experience on the Unlimited card include the beautiful love story between Cate Blanchett and Rooney Mara in Carol, Pixar's innovative, cerebral Inside Out,  Brazilian comedy of manners The Second Mother, Andy Garfield unleashing his inner Brando in 99 Homes and Saoirse Ronan giving a cinematic tour-de-force as a young woman torn between two men - and two countries, in Brooklyn.

Unfortunately, as you can probably tell from the 42 films I've recorded in the spreadsheet above, Cineworld are, shall we say, selective in the types of films they screen. One film that I had been dying to see was the Oscar nominated Mustang, but not one of the Cineworlds in central London (or around) screened it. So I still haven't watched a film that has been described by critics as 'the Turkish Virgin Suicides'. The Virgin Suicides, FYI, is one of my favourite films, so I consider this poor.

In fact, if I wanted to watch any arthouse, foreign or independent film, I was generally left wanting. Only the Picturehouse Central screened a decent selection of foreign films (indeed, that's where I watched The Second Mother and A Girl at My Door, both solid 8/10s or above), and as I couldn't go there without a surcharge after October, it meant I wasn't able to enrich my otherwise quite Hollywood-range of films I viewed.

But it wasn't just obscure arthouse films that Cineworld let its audience down with. In January, Quentin Tarantino's much-heralded The Hateful Eight was released in the UK, yet Cineworld were unable to obtain rights to screen it, as the Odeon managed a coup on that. As it turned out, The Hateful Eight was a pretty hateful movie, with far too much casual racism and misogyny for me, but it's the principle of the matter: if Cineworld couldn't obtain rights to H8, what would be next? It sets a dangerous precedent.

The excuse that Cineworld had for not screening Hateful Eight was that they didn't have the fancy 70mm Ultra Panavision presentation equipment to show it. To put that into Real Talk, obtaining the rights to it would have been too expensive and they didn't want to put themselves out of pocket. They're more than happy to take your money, folks, but when it comes to spending it, they're a bit more reserved. Funny, that.

And, because I'm not one to be dicked around (in my film subscriptions, as in life, I prescribe to Rosamund Pike in Gone Girl's mantra: let the punishment fit the crime), I shan't be renewing my Cineworld Unlimited card. I will be taking my business to their rivals, the Odeon, who have also released an unlimited card-type business model. After all, the Odeon actually show the films I want to see.

If you want your ex-girlfriend or ex-boyfriend to come crawling back to you on their knees (even if they're dating somebody else now) you have to watch this video
right away...

(VIDEO) Why your ex will NEVER get back...

This is interesting! I'm now into my second year with Odeon Limitless and I've found myself wanting to switch to Cineworld Unlimited. I've noticed that a lot of the independent films I've wanted to see weren't showing at my local Luxe cinema and yet Cineworld were screening them. The main reason I joined Limitless was because of the massive refurb and the fact they have more cinemas by me. However, their service is slow when you renew and I think the reward scheme Cineworld have is better. After reading your review I'm not sure if I'll still switch next year. As this post was a while ago I wanted to ask if you did join Limitless in the end?