A look ahead: CHECK THE GATE season at the PRINCE CHARLES CINEMA. 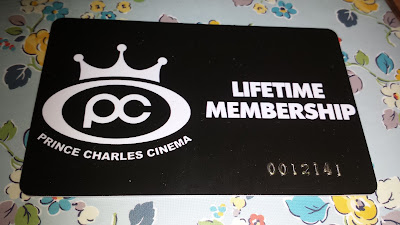 I absolutely adore the Prince Charles Cinema. I bought a lifetime membership (a bargain for just £50) back in 2014 and celebrated on the day by watching Richard Linklater's Boyhood. Since then, I have regularly given this delightful cinema my patronage, whether it be to see Francois Ozon's gender-bending The New Girlfriend, or their incredible Frozen singalongs, where I can unleash my inner Disney Princess with impunity. One of my chief lamentations about holding a Cineworld Unlimited card was how few independent films these cinemas screened, and a Prince Charles Cinema membership is an ideal panacea for that problem: for just a few quid, you can watch wonderful lesser-known movies (old and new) in an institution of London steeped in rich history.

Which is why I'm insanely excited about the upcoming Check the Gate: A Celluloid Celebration event at the Princes Charles Cinema, lasting between today, 9th July, until 20th August.

Casting my eye over the itinerary of films, some titles in particular that caught my attention are  Ridley Scott's unforgettable road trip movie Thelma and Louise (the last film to attain two Oscar nominations in the Best Actress category. Although if the Weinsteins hadn't tried to force Rooney Mara to commit category fraud, Carol might have attained such a feat, but that's a rant for another day), Nicholas Ray's iconic In a Lonely Place (which I raved about when I first watched), Paul Thomas Anderson's affecting patchwork quilt Magnolia (famed for, amongst other things, the frogs from the sky sequence), and a gripping film-noir and the picture which resurrected Joan Crawford's career - as well as won her an Oscar, Mildred Pierce.

But these are just some of the few eye-wateringly exciting titles listed, check out the link above and you're bound to find a title that either you love, or have always wanted to see. The season opens tonight at 8:30pm with Francis Ford Coppola's Apocalypse Now, which I have watched on TV many a time, but never on the big screen. Just picturing the lights dim, the huge screen and the Prince Charles Cinema speakers blasting out Wagner's Ride of the Valkyries is epic. In fact, I'm pretty certain that once you've watched Apocalypse Now in the cinema - as it Coppola intended it to be seen - the thought of viewing it again on a small TV? The horror, the horror.

Ticket prices are extremely reasonable and as ever, there's a generous discount for members (honestly, for £50 to become a lifetime member, the membership pays for itself). I will definitely be making the most of the eclectic menu of movies (the selection was curated by, amongst others, The Telepraph's Tim Robey and Time Out's Tom Huddleston) and frequenting the PCC over Summer.

Hope to see you there!