I gots my Odeon Limitless card!~~~~ Having shelled out £232 for a next-to-useless Cineworld Unlimited card for 2015-2016, I won't be suffering fools gladly in terms of movie cards, so if there are any glitches, I will definitely document them on my blog. I christened my Odeon card with Nicolas Winding Refn's The Neon Demon). 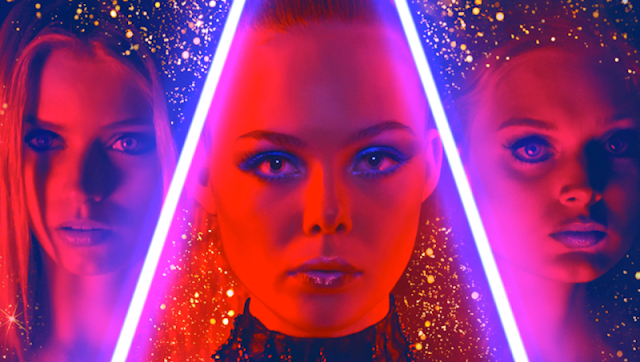 Jesse (Elle Fanning), a wide-eyed, virginal 16-year-old from small-town America, uproots to Los Angeles in the hope of becoming a model. Immediately, heads are turned by her. Ruthless modelling scout Christina Hendricks signs her up straight away, telling Jesse to fib about her age so she can get work. Make-up artist Ruby (Jena Malone) develops a soft spot for Jesse, wanting to take her under her wing. And two competing models, both blonde and gazelle-limbed like Jesse, but lacking her youthful naiveté, Gigi (Bella Heathcote) and Sarah (Abbey Lee Kershaw) smell blood. Literally.

I was anything but a fan of Nicolas Winding Refn's 2011 snorefest, Drive, and alarm bells rang when the title credits evoked the neon lights and electro-soundtrack of said film, particularly as, in a distinctively masturbatory flourish, the director's initials were emblazened across the entire sequence. It was almost like NWR was staking a claim on his ponderous self-indulgence; owning it. And indeed, many of the scenes in The Neon Demon look like extended shoots for some quirky music video. A beautifully shot, meticulously-directed music video, but a music video nonetheless. Chief examples that come to mind are a red-hued scene in which Jesse goes on some kind of ego trip, kissing her reflection repeatedly, as well as the film's unsettling open sequence, when our pretty lead is shot with make-up blood applied convincingly around her neck.

NWR's licentious directing style would detract from a good story at the best of times. But The Neon Demon doesn't even boast that. It is a film that tries to do too much: both a Icarus-type tale of Jesse's vanity getting the better of her, mixed with some casual cannibalism amongst models and a whole flock of unsavoury characters, not least Jesse's motel-owner, a super-pervy Keanu Reeves.

In trying to do too much, it doesn't succeed at any of its objectives, other than some cheap shocks. The dialogue between characters is implausible and downright laughable at times, and Jesse's sudden modulation from an innocent sweet girl to a malicious megalomaniac, is contrived, to say the least. You have to completely suspend your belief to get on with The Neon Demon; I lost count of the plot holes I encountered.

Fortunately, the actors aren't quite as immersed in their own egos as Jesse and NWR are. Elle Fanning, who impressed me very early on in her career, in 2010's Somewhere, continues her hot streak here. She really does the best she can with an under-written character and tries to inject some humanity into Jesse. At the start of the film, she's an artless, naive kid who just wants to get some modelling gigs. By the

end, the audience finds her self-awareness at her beauty, and the power it brings her over everyone, insufferable. It is a testament to Fanning's charisma and screen presence that she can convey this personality transition so well.

One element that she is let down by, however, and again, this is an issue with the artificial script rather than her acting performance, is that Jesse repeatedly declares how gorgeous she is, and others echo this sentiment.

Whilst Elle Fanning is indisputably a very attractive girl, with big blue eyes and rosebud lips, she isn't better looking than Mad Max's Abbey Lee Kershaw, or Dark Shadow's Bella Heathcote, two model-come-actresses who are truly supermodels in the full sense of the word, and got to where they are through graft and natural beauty unlike Kendull Jenner who got there through nepotism. This greatly underscores any supposed envy they're meant to feel for this bright new upstart. So when Sarah asks Jesse, in a voice full of genuine longing, 'how does it feel to walk into the room and know you're the sunshine?', when Sarah looks like this (see below), the dialogue just doesn't ring true.

The MVP of The Neon Demon for me, was Jena Malone as Ruby, who's dedication to her role truly cannot be faulted. Unlike competitor models, Ruby doesn't thrive in Jesse's downfall, so when she looks out for her, you believe Ruby's compassion to be legitimate. But under the veneer of Ruby's friendliness, Malone tantalises with a hint of moral ambiguity.

There is one scene in The Neon Demon (probably the main contributor to its well-earnt 18 certificate) wherein Ruby carries out an aberrant act, and I can think of countless actresses, less established than Malone, who would have told NWR to get stuffed. It was an aversive scene to watch; it must have been infinitely more difficult to film. But Jena Malone, as she does in all her roles, performs with both professionally and convincingly. I cannot give her enough kudos for that. If she can do wonders with such a shoddy script, just imagine what Malone could do with a semi-decent one.

Similarly, Lee and Heathcote aren't employed as just good-looking clothes-hangers in this film. They, too, have their share of unappetising acting work, tasks that you wouldn't ordinarily expect women this beautiful to have to do. The fact that they not only did them, but acted well (a rarity for former models in films; I still have nightmares when I think about Cara Delevingne's acting [if you can call it that] in Paper Towns), indicates to me that these two Venuses have promising film careers ahead.

And because it was so utterly nonsensical, The Neon Demon didn't prove to be quite the enjoyable trash I'd been hoping. The savage imagery was bad enough. But I could have made allowances for that if the film had carried some semblance of a script, which it didn't. But to the movie's credit, I found it a hell of a lot more arresting than Drive, and that was mainly due to the strong work from the film's three blondes, and especially Jena Malone. Give that girl a decent script, stat!!