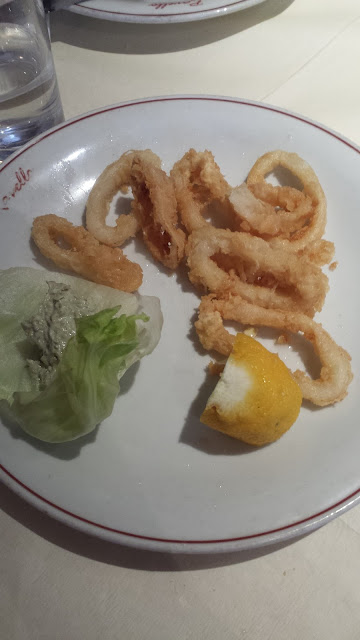 With my Tastecard expiry date approaching on July 12th, I realised how little mileage I'd gotten out of it this year. It just so happened that me and a group of friends were due a catchup, so I thought I'd make use of it whilst I had a chance to at Ravello, a family-run Italian restaurant that was walking distance from where I study in central London.

I had a table booked for the four of us at 6pm, and when I arrived at the restaurant at 6, two things triggered alarm bells. Firstly, the Food Hygiene Score was just a 4. Now, call me pedantic, but I don't think it's too much to ask to demand the perfect 5 from somewhere which will be handling my food. Also, I was the only one there at that time. On a Friday evening. These two elements did not instil me with confidence.

As the evening went on, I realised that my initial doubts about this place were correct. Pictured above is the starter I had. Without Tastecard, it was priced at £7. With the 50% discount, the price is more palatable at £3.50, but I still think that's a bit of a cheek for a few measly pieces of squid. My friends and I had dined at Isolabello Italian restaurant in Holborn a year or so prior to this meal, and three of us had had calamari for starter there. The calamari in Isolabella was far superior to the one here. This crap squid, in tandem with the fact that this was the second time in as many weeks that I'd been cheated on my starter, nearly pushed me over the edge.

Nearly but not quite. That would be the job of the man, sirloin steak marinated in the most suspect-looking tomato sauce I've seen. As you may have noticed, steaks are my go-to dish when I dine out, and I use the quality of the steak as a Litmus test for the overall quality of the restaurant. 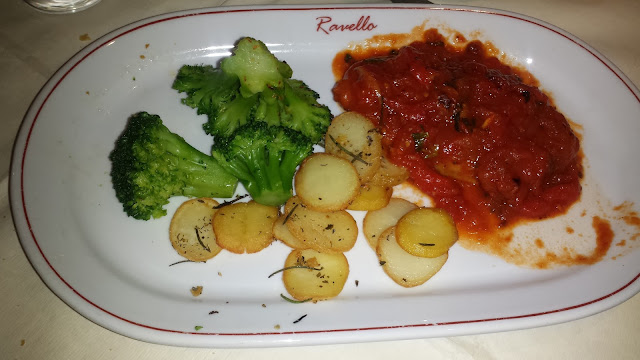 Well, this stanky-ass steak, pictured above in all its, erm, glory, is Ravello in a microcosm: lazy, cheap ingredients, poor workmanship and a hurry string something together just to get the punters off the waiters' backs. The tomato sauce in particular was particularly abrasive to my tastebuds; I strongly suspect it consisted of ingredients that were past its sell-by date, because my stomach didn't sit well for the rest of the night post-ingestion.

As the night progressed, more people entered the restaurant, and I can only assume they were members of the restaurant staff's family who dined here out of pity, because they seemed to be regulars and I have no idea why anyone would subject themselves to this awful restaurant more than once. Once the regular punters arrived, any attention we received from the waiters completely evaporated. We had to wave several times to ask for the bill, and a few times more to ask to pay via the card machine. Two clients who arrived asked for the bill after us were allowed to pay before us, a gross inconvenience given one of our group had a train to catch.

Finally, a note on the desserts: graciously, only one of our party of four ordered a dessert, a tiramisu. This tiramisu was promptly taken out of a box from the fridge (behind us, so not even in the kitchen), and we saw her cutting it up and serving it. Talk about shattering the illusion. I understand that not everything in a restaurant will be home-made, even if naturally, we would prefer it to be. But for a RRP of £5.75, you really would be hoping for better than something out of the box. And if it's going to be out of the box, at least have  the good grace to hide your duplicitous and stingy tracks!

Safe to say, it will be a cold day in hell before I set foot in Ravello again.