In her final, crucial years of secondary education, Su Yinjin (played by Liu Yifei)'s parents struggle to make ends meet in order to send her to a prestigious high school. On her first day, she is rubbed up the wrong way by the haughty Cheng Zheng (Kris Wu), a wealthy, handsome, high-achieving, sporty popular boy, but one with an ego to match. She finds his arrogance and cavalier manner with money insufferable, so of course the two are drawn to each other and have an on/off romance which dominates the ensuing years of their lives. 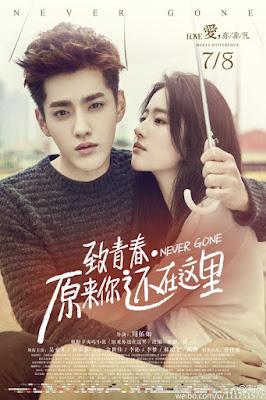 I haven't watched a Chinese film in the cinema for far too long considering I'm both Chinese and a movie buff, but unfortunately this was not a happy return to form. Never Gone was so heavy-handed and clunky that it makes Twilight look nuanced. The Pride and Prejudice-type story arc of hate gradually morphing into respect, before love, is one I never tire of (I loved Bridget Jones' Diary and romance is the warmest genre), but the execution here, via contrived plot machinations just stretched credibility too thin. For example, to expect us to believe that the two protagonists could go to separate Universities in different parts of China, and a good-looking boy who could have his pick of the girls, yet he continually and faithfully yearns for Su Yinjin throughout his time at Uni, is an implausible and downright irresponsible lie that cinema should not be peddling.

That is not the say the film was completely devoid of honesty. As time goes on, the couple find that that Lana Del Rey lyric, 'sometimes love is not enough and the road gets tough, I don't know why', and life (and a dastard Mr. Wickham-type character) gets in the way of their being together, despite how hard they try to make it work. By conceding this and highlighting the role adversity plays in unsettling a loving relationship, the film retains some emotional truthfulness and poignancy, although this message was delivered much better in Blue is the Warmest Colour.

The disappointment of seeing the two leads in this film separate isn't a fraction as heartbreaking as that between Adele and Emma in BITWC, because you're just not invested in this relationship. Truth be told, as the cracks were beginning to show in this couple’s relationship (and the film made sure you GOT DA MESSAGE because the score modulated oh-so-subtly from jovial to depressed), it just made me reminisce about the earth-shattering confrontation scene in Blue is the Warmest Colour, and wish I was watching that instead of this dud.

The fault for this lies with the cheesy, soapy script which tries to manipulate the audience’s feelings far too frequently and unsuccessfully. It breaks the first rule of screenwriting, which is that you should show things, rather than tell, clumsily shoe-horning items into preposterous lines of dialogue. Then there’s the lazy direction which relies too heavily on stylisation; in an early scene set in the high school, the way characters were introduced with a cartoonish name was lifted right out of Mean Girls/Easy A. Whenever the characters got into a heated debate, the director misguidedly employed slow-motion to try and emphasis the sense of despair, but instead, it just felt cheap and telenovela-like.

And finally, the poor acting. I haven't seen anything else from Wu and Liu before so I won't rush to denounce them as bad actors just yet. But their performances in Never Gone were certainly not good: both overacted horribly, employing contorted facial expressions to emote, in such a hammy manner it felt like something out of the Jennifer Lawrence School of Over-Acting.

In fact, the BBFC draconically slapped a 15 certificate on this film (for which I will be writing an email of complaint, I've seen saucier PGs), predominantly because 'a woman initially rejects a man's advances before giving in' and kissing him. The fact that the BBFC construed these acts not as the frisson in a relationship, or the woman acting coy, but rather as a coercive act of sexual violence, tells you all you need to know about the stale chemistry between the stars in this clunker. Not one of the romance genre, or Chinese cinema's, finest hours.