Statistical Analysis of Usage of My Odeon Limitless Card

I went on a 4-hour R course last year, and since then, I’ve just been fixated with adapting the code they gave us to draw pretty graphs with, in order to nerd out over my personal interests (chiefly, films and football).

This post will be much like the one I did six months ago when I analysed my film-watching habit of 2016 across all mediums, only here, I’m just analysing the 69 titles I saw on my Odeon Limitless card with some attempts at ~science behind the graphs I present. 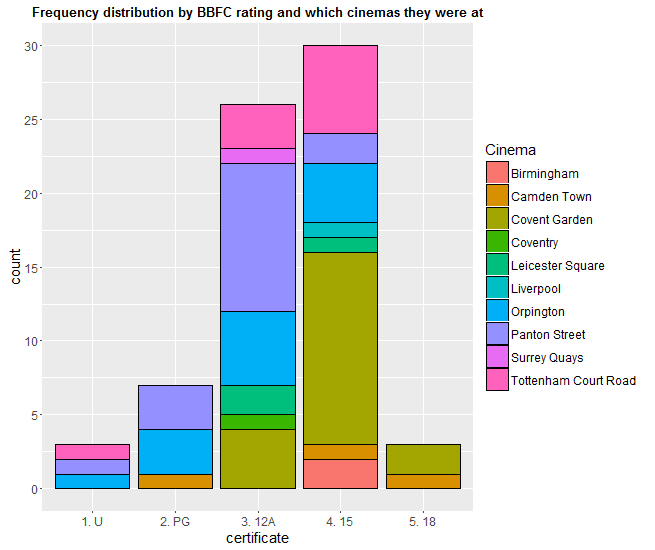 Unsurprisingly, the 15 certificate was most prolific of my Odeon Limitless viewing log. This was the rating that the BBFC gave to the most films (401) last year. What I love about this graph is that, distribution of 18s aside (in my frequency diagram I’ve seen the same amount of 18s as Us which does not mirror their certifications), the general shape of the graph looks like the BBFC’s distribution of certificates awarded last year! (Graph taken from there Annual Report). 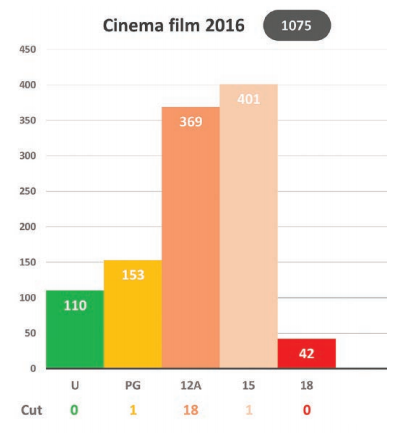 I went to three cinemas just once: Coventry, Liverpool and Surrey Quays. The former two visits were both due to me being in the cities due to conferences being on that were related to my line of work.

Despite Orpington Odeon being my local cinema, absolutely pristine due to being recently constructed and a ten minute walk away from where I live, I only watched thirteen films there, because they don't tend to screen the most cerebral fare (what does that say about my hometown? I'm saying nothing). To illustrate my point, I saw both the two Emma-led, underwhelming musicals at Orpington: Beauty and the Beast, and La La Land. (I do like 'Gaston' tho, I'll give you that). 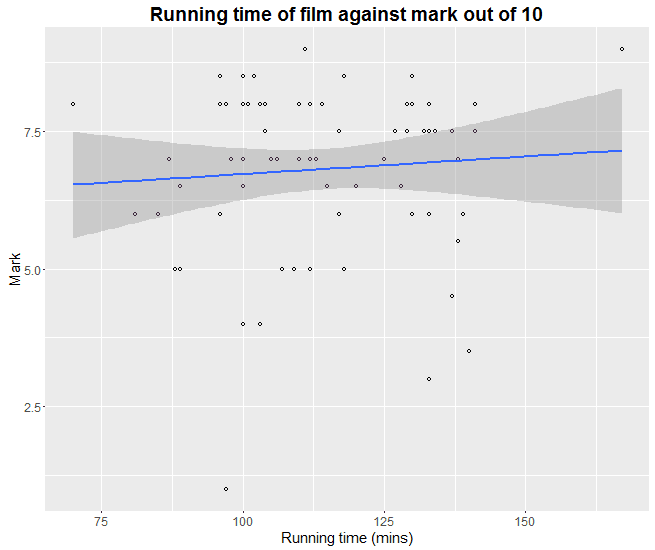 No-one makes tenuous Disney references like Emma, no-one draws scatter diagrams like Emma, no-one debunks her own pre-conceptions like Emma! Despite me thinking I have a short attention span, there is a non-statistically significant upward trend between length of film and how much I enjoyed it. This was heavily skewed by Handmaiden (the longest film I saw on my card) and Elle (130 mins) being awarded a 9/10 and 8.5/10 by me, respectively, as well as an 8/10 for Wonder Woman, the second longest film, and a 7.5/10 for Logan, the third longest.

The average running time of all these movies was 114 minutes. Bit on the long side if you ask me. 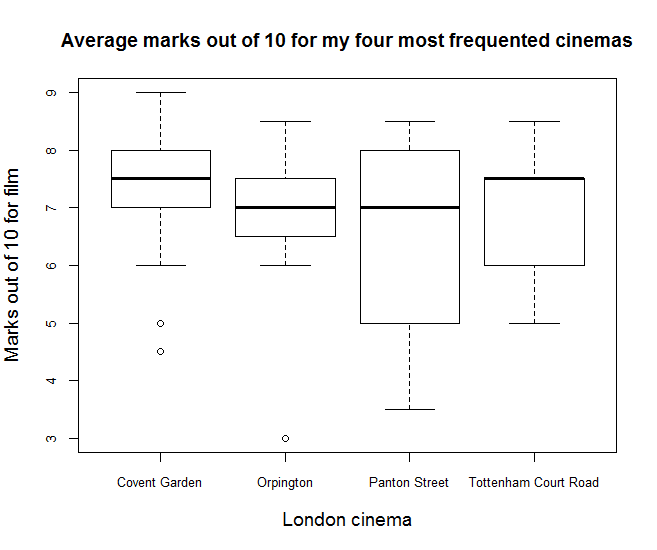 Despite my shade of the limited choice of films at Orpington, I chose my trips there carefully, and as such, my median mark out of ten for a film at my local is a respectable 7/10. Arrival helped a lot with this; Orpington managed an upper tail 8.5/10 thanks to the Amy Adams vehicle and thus its boxplot doesn’t look too embarrassing compared to the other three.

Covent Garden fares favourably in this comparison as I watched Moonlight, The Handmaiden and Elle there. That's three of my top five of 2016, and the other two films I didn't even see at Odeons (Zootopia was an early 2016 release so I was using my Cineworld Unlimited card when I saw that, and I saw A United Kingdom at the London Film Festival)! Mind you, I also watched Bostonian snorefest Manchester by the Sea and the crude and unfunny Sausage Party at the Odeon Covent Garden as well, so it can’t be too pleased with itself.

Odeon Panton Street both benefited and suffered from its dedication to screening East Asian cinema. It showed some gems like Luck-Key, Someone to Talk To and Vanishing Time: The Boy Who Returned (all 8/10s in my book), as well as some real clunkers such as I Am Not Madame Bovary, Mission Milano and So Young 2: Never Gone. The last film I saw there was My Life as a Courgette, though, so I will hold it in good regard as I ended my time there on a high. 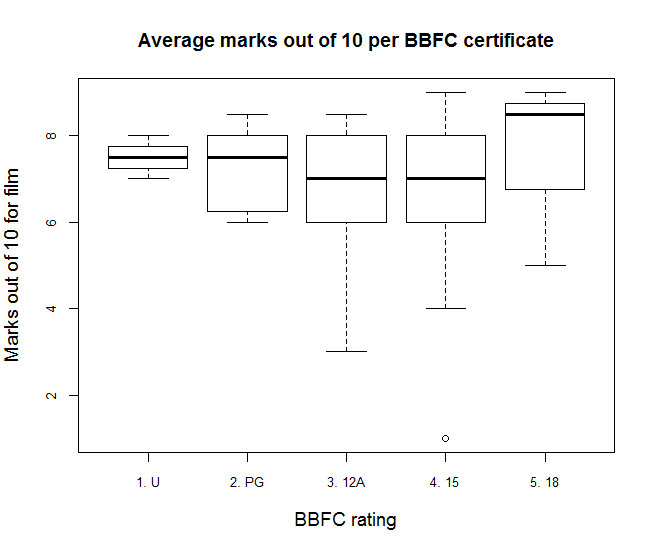 Me enjoying both Handmaiden and Elle so much (both made my top 5 of 2016) also meant that the 18-rating fared best on this boxplot of median marks out of 10. 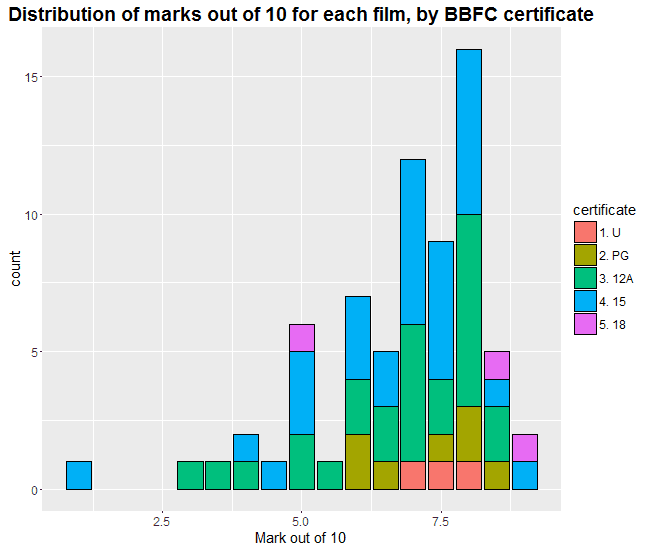 Given that 15 was the most prevalent rating, accounting for 43.5% of the films I watched on my Odeon Limitless card, it was no surprise that it would span the spectrum in terms of quality. The sole 1/10 I awarded was to a 15-certificate film (the dire Amy Schumer ‘comedy’ Snatched), as well as a 9/10, and my favourite film watched on the Odeon Limitless card, Moonlight. The look on Kevin's face when he recognises Chiron in the diner, tho. Maaaaaaan.

As both the boxplot and the frequency diagram illustrate (the three salmon squares next to each other), U-rated films had the tightest range in quality, spanning just 1/10. The 'worst' U-rated film I saw was the phoned in Finding Dory, which I still generously gave a 7/10 to, mainly due to the lovely Thomas Newman score. The highest U-rated film, in terms of marks, was When Marnie Was There. Funnily enough, Finding Dory would be considered a 'low U' (soft for even the U-rating) and When Marnie Was There would be considered a 'high U' (towards the upper end of allowable threat & thematic material at U), so there is some BBFC paralleling there!

Generally, I only watch a movie at the cinema if I think it’s going to be worth my time (7/10 or more). I didn’t judge this too well, as the arithmetic mean of the scores I awarded was a measly 6.81. That said, this was always going to be lower than 7/10 as there were a few films I actively hate-watched (Snatched because I h8 Amy Schumer, Beauty and the Beast because I h8 Emma Watson, etc) just cos I'm a shrew, as well as bloated Oscar-begging titles that I kind of had to watch for the sake of completeness (Manchester by the Sea, La La Land, Fences) as well as for the clout of slagging off Casey Affleck, rather than just ‘… because he’s a sexual predator!’. (The things I do for this blog, Jaysus).

I conducted a regression of my mark out of 10 for each film and the price it theoretically would have cost me had I paid student prices, and, interestingly, for each £1 increase in the marketed price of the film, my keenness on the film would have been 0.004488 less! This is because the more expensive films were generally more mainstream (Guardians of the Galaxy 2, The House), and mainstream =/= quality.

Finally, the actor who appeared in the most films I watched on my Limitless card was Jonah Hill, in War Dogs, Sausage Party and The Lego Batman Movie. That was obviously by design. Jonah Hill and Rooney Mara are gonna appear in a movie together later this year. I cannot wait!!