That Harry Styles movie, Dunkirk got its BBFC rating today, and as with Christopher Nolan's last six feature-length films, it's a 12A: 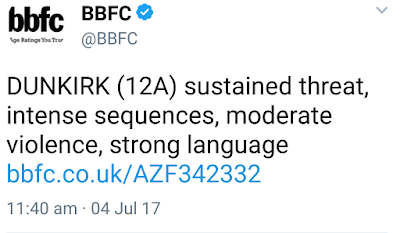 What stood out for me is that the short insight, for the four things in the film that render it 12A-worthy, each feature a different adjective:
- sustained threat (as was used in the short insight for Nolan's The Dark Knight, still by far the most complained about movie in recent years to the BBFC)


- intense sequences. This is a new one for the BBFC, although they have used 'emotional intensity' for a few U/PG/12As.

- moderate violence (the sole reason Nolan's Inception and The Dark Knight Rises got 12As).

- strong language. Because, as in Chris Nolan's Interstellar, we all need to drop an f-word or two at moments of heightened stress. Technically, this element should say 'infrequent strong language' as the f-bomb is only allowed sparingly in 12As, but the BBFC have a character limit of 75 characters for short insights, and the above short insight as it is, is on 71 characters. Adding 'infrequent' would have pushed it past its character limit, and thus the frequency was omitted.

The reason the character limit got eaten up was due to the BBFC's rather indulgent choice here to use a different adjective for each issue. Compare this to something like The Girl on the Train or Hell or High Water's 'strong language, violence, sex': just one adjective. In fact, if all the elements are strong, then there's enough characters when there are four classification issues, and enough left over to throw an extra 'strong' in for good measure! 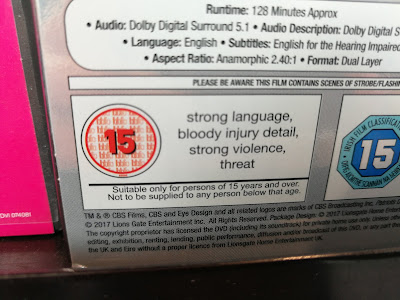 This is the short insight for Patriot's Day, my 14th favourite film of 2016. It was directed by Peter Berg, who, being quite the multi-tasker, also used to act. In fact, he was the sex toy of my second sexiest woman in film of all time.

Most 12A-category defining content is 'moderate', with strong violence allowed rarely in 12As (and when it does, it causes hella complaints: Dark Knight, The Kite Runner), and, obviously strong language. Which is why most action/espionage movies at 12A get a straightforward, character-efficient 'moderate violence and threat' or, if the writers felt like sticking in an f-bomb to really cement dat lucrative PG-13 rating, 'moderate violence, threat and infrequent strong language' (see: Batman v Superman, Bridge of Spies, The Hunger Games: Catching Fire, to name but a few).

Dunkirk's linguistically adventurous short insight got me nerding out over other films who's category-defining issues (and those with at least three, please) had a different adjective for each.

This sums to 59 characters which disallowed the BBFC from adding 'infrequent strong language' or even just 'strong language', as per Dunkirk. As strong language elevates anything from a  PG to  12A, this should have been mentioned, if the BBFC were unconstrained by character limit.

Given that the latter issue is a little spoiler-heavy, I wonder why the BBFC didn't use Dunkirk's 'intense sequences' or The Lovely Bones' 'disturbing images', but instead, chose to describe a scene in the film.

'Necrophilia' is just one word and doesn't feature a descriptor, which is just as well. The less said about that, the better. Other than, if the BBFC wanted to avoid spoilers, they could have just used 'disturbing behaviour' or 'aberrant behaviour' or something.

Atonement (15)
- very strong language
- bloody injury
- moderate sex (I'd contest this scene, my favourite love scene in a movie ever, was a bit more than 'moderate' in detail, intimacy, length and moaning, but even if it were deemed strong, the point would still remain).

A curious thing about Atonement's (incidentally, a film which contains a very memorable Dunkirk sequence of its own) short insight is that if we were to go by the traditional BBFC labels of very mild, mild, moderate, strong and very strong, Atonement's short insight traverses three stages (moderate to very strong) without a mention of the average one (strong)!

In terms of TV, I found these two examples for individual episodes of shows:

True Detective (18)
- strong language (they didn't technically need to flag this, as you're allowed unlimited f, MF and CS-bombs in a 15. It's only the c-word, which is 'very strong language', which is limited at 15. Thus, strong language itself isn't a category issue at 18)
- bloody violence
- gory images

Transparent (12)
Every other episode of Transparent is a 15 or an 18, except for this one.
- infrequent strong language
- bullying scenes
- discriminatory language

What's interesting here is that the first and last issue relate to different facets of language. The former, cursing. The latter, bigoted and abusive language.

I'm racking my BBFC nerd senses and I don't think I can find another example like Dunkirk where there are four different issues, each with a different adjective. Obviously, if the 75 character limit weren't an issue, The Lovely Bones would join it.

If you can think of any 4 (or 5) category-defining issues, each with different adjectives, let me know in the comments! 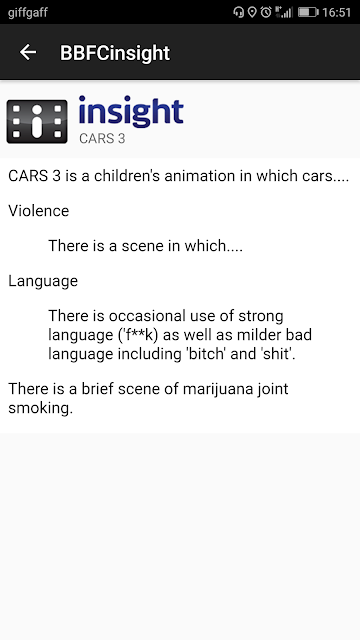 Why Dunkirk has such elaborate consumer advise I don't know. Surely "moderate violence, sustained threat, strong language" or "intense threat" would've sufficed, but then again isn't threat always going to be intense? Nobody builds tension better than Nolan (love that man), and I expect most people going in to watch a war film get the gist of what to expect.

Cars 3 being a U and a G in Ireland and the US surprised me, the trailer was dark (and a PG). The film must be very tame which makes the bleak tone in the trailer seem a bit odd.

Hey James! Always a pleasure when you stop by :)

I agree that Dunkirk's short insight is detailed to the point of verbose, especially as the Irish have summed the same thoughts up with 'Intense action sequences. Brief strong language.'

Regardless, I, too, am very excited for this film! Tom Hardy and Cillian Murphy with Chris Nolan again, with Kenneth Branagh for a bit of added thesp!