If you like steak, but don't want to commit to 400g of just one type, and in doing so, restricting your choice to a rump which may or may not be cooked to your ideal condition, Zelman meats could well be the solution to your quagmire.

At Zelman Meats, there are four core beef steaks you can order (Smoked Short Rib, Chateaubriand, Sliced Picanha, “Dirty” Sirloin Steak). The former two are priced by weight, and the latter is priced in conventional restaurant manner, at £32 for 400g. The minimum order per table per given type of meat is 200g, but if you go with a friend, you can order a joint amount of 200g of several types of steaks, and share everything, so there's variety in your meal! 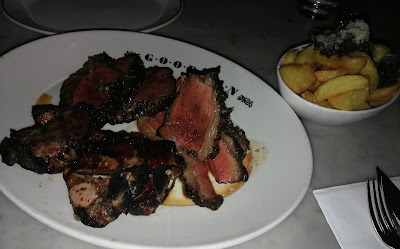 Also pictured above are Black Truffle and Parmesan Chips, which were a bit pricey at £8, but the conflation of truffle, chips and cheese is hard to argue with.

Of the meats, the Chateaubriand and Sliced Picanha were amazing. Zelman Meats do both of these steaks medium rare, so if you like your steak well-cooked, the rawness of the meat may not be to your like. Personally, I like my steak as rare as possible (if it ain't moo-ing, I ain't interested), so was slightly cautious when the waiter told me there was no 'rare' option.

But, credit where credit is due, these meats probably suited medium rare better, the taste evoking memories of a South African BBQ I had been to in April, where the meat was equally to-die-for. And if you compare the photograph above to other steak joints where you get one rump, the benefit of choosing a variety of steaks, in smaller quantities, is prominent.

The only disappointment from the meat we ordered were the lamb chops, which purported to be cooked 'medium', but were so over-done and rubbery, I could barely bite into them. What's more, the closer you got to the centre of the lamb chops, the more arid it tasted, too. Most unwelcome.

Although subtle in flavour, the truffles went with the chips extremely well, and added a quantum of much-needed greens to a meal which was otherwise high on stodge factor. The chips themselves were chunky and filling, and the bottom of the bowl had the remnants of the corners of the chips that had been fried more than others, a guilty pleasure of mine. The sprinkling of Parmesan over the chips gave the side dish even more flavour; my only grumble was that there wasn't enough cheese.

We also had béarnaise sauce, which was £1 per serving but came in very generous portions (as compared to the miserly portions they give you at the otherwise excellent Hawksmoor). Dipping the steak in the lusciously rich sauce was a dream come true.

The décor was impeccable and we were seated on awesome American diner-style seats, which adds a certain familiarity to proceedings that are missing if just sat on regular chairs. The service was OK – our waiter was very busy so we often had to wait longer than was ideal to ask him for things.

The upside of dining at Zelman meats is, as the meat is all cooked at one particular setting, whatever you’ve ordered has probably been pre-prepared and is ready for you, thus reducing the length of the wait.

In short, if you like your steaks imposing and delicious, and want a friendly and unpretentious setting to eat it in, you could do a lot worse than Zelman Meats. The lamb was best forgotten and the restaurant was noticeably understaffed, but the succulence of the steak makes up for those vices.

To read my other restaurant reviews, click here. If you would like me to review your restaurant, drop me an email at lemon_and_lime7@hotmail.com.
Posted by Emma at 7/04/2017 08:30:00 am