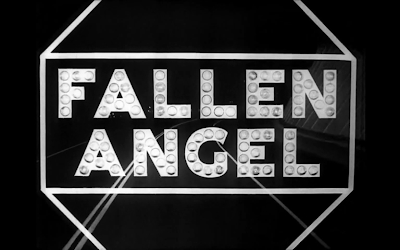 Eric Stanton, a penniless, down on his luck conman arrives in a Californian coastal town and instantly falls for Stella, the resident siren. Unfortunately for him, he’s not the only one to have fallen under her spell, as all the men in the town are equally smitten with her.
Also unfortunately for Stanton is that he has no money, meaning the mercenary Stella refuses to marry him. 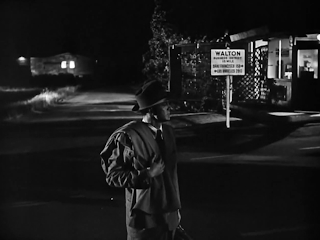 In an attempt to procure funds to make himself more of a catch in her eyes, he woos June Mills, the good girl of the town, who’s sister has wealth to spare. The plan is to defraud her of her wealth so then Stella and he will marry and live the material life she feels she merits. But, in getting to know the shy organ-playing bookworm June, he struggles to separate his heart from his head.

Otto Preminger has directed several of my favourite films, including Laura, The Moon is Blue and the noirish exploration of drug addiction, The Man with the Golden Arm. Fallen Angel plays with two of the most familiar tropes in film noir: the femme fatale and the homme fatal, but offers a window of deliverance for the latter, to give the well-worn plot arcs an intriguing twist. 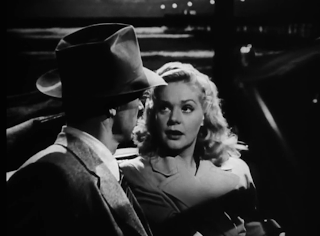 The ‘con artist falling for the person they’re attempting to swindle’ plot beat always makes for fascinating viewing, and indeed, it underpinned my second favourite film of 2016, the steamy Korean heist flick The Handmaiden. In addition to the 18-rated sex scenes which would never have stood in the Hayes Code era of Fallen Angel, The Handmaiden was an excessively tricksy film, which is far removed from the more straightforward storytelling conventions they employed in classic era Hollywood.

But the simplicity of Fallen Angel suits the film. Scenes where Stanton worms his way into June’s heart (such as imbibing her first alcoholic beverage) are filled with a simple charm as Faye winningly depicts how her sheltered character comes out of her shell. Yet they are also underscored with tension and dramatic irony, as the audience knows the principal character is doing it with ulterior motives. 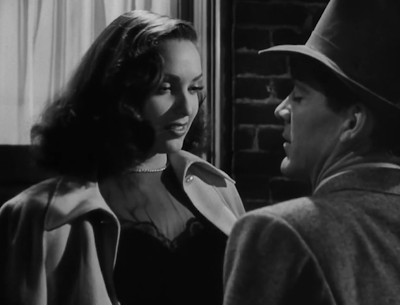 The protagonist yo-yos between the two women, the vampish, sultry but extremely selfish Stella (Linda Darnell) and the virtuous innocent who’s too trusting for her own good (Alice Faye). You will him to go for the nice girl, but Darnell’s vampish allure, all thick eyelashes and withering looks, cannot be overstated, and as such, it’s not hard to see why she has half the town under her cosh.

The virtuoso camerawork by Joseph LaShelle was some of the best for its time. The way the camera rests on Darnell’s pulchritudinous form accentuates the actress’ sexuality. The use of shadows, and light and dark effectively ramp up the dark sense of foreboding of the film, contributing to the ominous feeling that in any scene, someone could be – and probably is – lurking around the corner.

The murder plot, a somewhat surprising turn of events late on in the film, makes for a genuinely twisty whodunit. Trying to work out the perpetrator genuinely puzzles the audience. Darnell has four men lusting after her in the film, Faye’s character has the obvious motive of jealousy, and her sister, who was burnt by a slimy man in the past who conned her, has the motive of trying to protect her sister (and her assets).

Whilst the reveal does rely on some improbabilities, this is not new to film noirs. Suspend your disbelief over how conveniently everything lines up in La La Land movies, as I did for Mildred Pierce, Sorry, Wrong Number and one of the greatest noirs of all-time, Double Indemnity, and the film is more enjoyable for it. 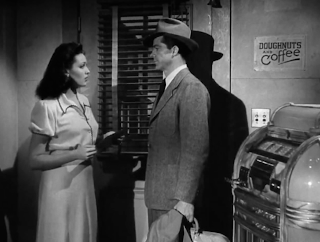 The most interesting aspect of the film, however, is not the murder, but the depth of the central character. As Stanton reflects, he’s a loser. He’s gotten so used to losing at life, believing the dice are perpetually loaded, that he’s given up trying to fight it. That is, until he meets the ‘Fallen Angel’ (but who does the title refer?)

Dana Andrews, who had previously collaborated with Preminger in 1944's Laura, a film commonly regarded as one of the all-time greats, does fantastic work under the same director again. In his understated, precise way, conveys each of these disappointments and unfulfilled dreams with just a look or a barely discernible shrug of the shoulder. Andrews is fully attune to his character's backstory and how that has clouded his perception of the world, and captivates the audience with it in his rounded, humane performance.

This subtle style of acting was particularly impressive given it came in a classic era film, where characters emotions tended to be more explicitly telegraphed for the audience.

In modern films, such a nuanced form of acting, where it doesn’t feel so much as the performer is acting, but reacting, makes for some of my favourite performances: Charlotte Rampling in 45 Years, Amy Adams in Arrival and Isabelle Huppert in Elle, to name a few.

That Andrews mastered it 73 years ago, is really something.

Hello Dear, are you in fact visiting this site
daily, if so after that you will definitely obtain good knowledge.

Heya i am for the first time here. I came across this board and I
find It really useful & it helped me out a lot. I hope to
give something back and aid others like you helped me.