Being as big a BBFC nerd as I am can be an affliction sometimes. It means that, for purposes of BBFC research, I end up watching titles that I would not watch otherwise (Fairy Tale – Dragon Cry, Red Sparrow, etc), and not particularly enjoying the experience.

Isle of Dogs was another example of such film. It wasn’t a bad film at all, but Wes Anderson is just not to my taste, and I didn’t feel like the film had enough of a sense of jeopardy regarding the dogs' mission, to keep me gripped.

The only thing I liked about it was Alexandre Desplat’s score, who, despite me taking umbrage with him winning an Oscar for Anderson’s The Grand Budapest Hotel (which, like Isle of Dogs, I found gratuitously 'quirky') over Hans Zimmer for Interstellar, and beating Zimmer again this year, has definitely got compository chops. The Japanese-style drumming and use of oriental instruments lent well to the style of the film, helping create the semblance of ‘threat’, when really, I had no doubt that the dogs and the little boy would be just fine.

However, I braved Wes Anderson’s signature brand of style-over-substance for one reason and one reason only: the film got a PG-13 in the States, and a PG by the BBFC and IFCO, and I was curious to see who I sided with.

Before watching the film and on reading the extended BBFC report, I was leaning towards siding with the MPAA. These passages in particular struck me as being a bit full-on for PG:

A dog's ear is torn off in a fight, resulting in a small amount of blood

Human patients' internal organs are briefly visible during a scene of surgery. A piece of metal debris becomes embedded in a child's head, causing a small trickle of blood, but the child survives.

Having seen the film, however, I realised that this was a case where something sounds worse written down than it was in execution. It’s true that a dog’s ear was torn off in a fight, but the fight scenes between the dogs were animated in a very cartoonish way (mounds of dust to indicate a kerfuffle), and the sight of blood was very fleeting.

The surgery scene didn’t last too long, and was very procedural – removing one person’s kidneys to donate to another. Admittedly, had that been shown in a live-action film, it probably wouldn’t have gotten a PG, but the beauty of animation and stop-motion is that you can skate over the grislier details, which the film’s animators did.

And finally, the shrapnel lodged in Atari’s head was definitely the thing that disturbed me the most in Isle of Dogs, but the kid is so resourceful and resilient that he just pulls it out and gets on with it.

Isle of Dogs is rated PG-13 for ‘thematic elements and some violent images’, whereas it got a PG here and in Ireland for ‘mild threat, violence, language’.

In this case of a discordance between the BBFC & IFCO and the MPAA, I agree with the Brits and the Irish.

Probably due to Isle of Dogs’ release, a bunch of Wes Anderson movies are being re-released for cinema viewing. When a film gets another cinematic release, the BBFC re-rate it. Most of the time, the film retains its original rating, unless it was first rated a long time again, in which case, the guidelines have changed and it usually results in a film being down-rated (from 18 to 15, say).

The Royal Tenenbaums got a 15 when it first came out in 2001, and it has retained its 15 certificate this time round. However, the guidelines changed quite a bit between 2001 and now, and this is proven in what the BBFC flagged as the 15-level issues back then, and now: 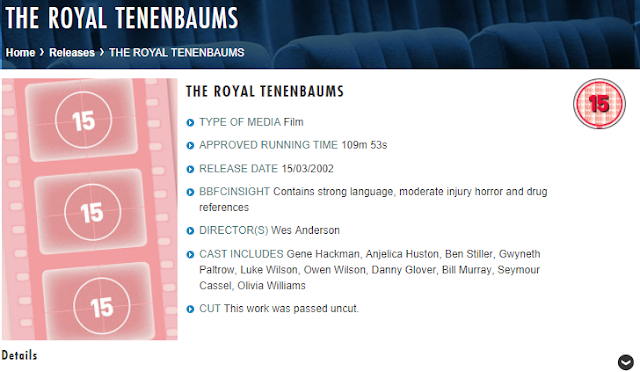 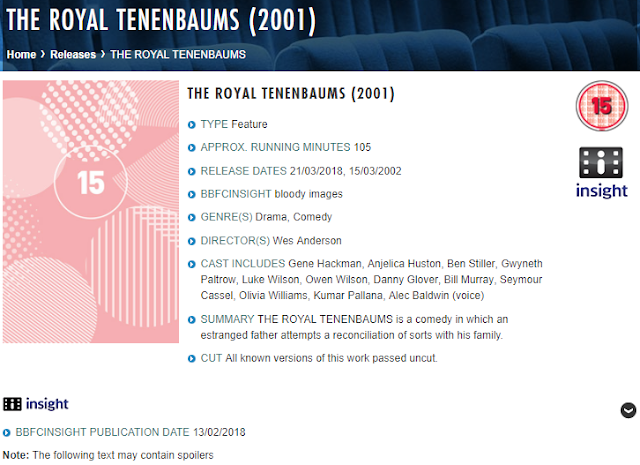 So before, the language was the first thing they mentioned. There are a handful of f-words in The Royal Tenenbaums, but the BBFC 12A (as well as the IFCO 12A) have increased their allowance for the amount of utterances of f-bombs at 12A (About Time, which is a 12A here and in Ireland, has seven uses of 'f_ck'. This title holds an R rating in America). Hence why the ‘infrequent strong language’ is no longer category-defining at 15.

The BBFC also seem to have become more lax on drug usage and references, as, that was one of the reasons the film was a 15 back in 2001, whereas drugs haven't been flagged in the short insight in the 2018 rating.

The only one of the three category-defining issues from 2001 that has stayed, is the sole reason the film is a 15 now: bloody images (although this was phrased as ‘injury horror’ back in 2001, they’re referring to the same thing). And that’s one area where the BBFC have remained as strict, if not, gotten more so: depictions of suicide and their aftermaths.

The Royal Tenenbaums’ updated BBFC short insight is notable because now, the film’s category-defining issue is completely difference from that in the MPAA, where it is rated R for ‘some language, sexuality/nudity and drug content’.

Like with Coco, this demonstrates the difference in film ratings bodies in what they perceive to be most harmful!

Finally, I had the good fortune of getting to see Love, Simon last Thursday, and in addition to being so charming, funny, and emotional af, it contained one of the best precision f-strikes I've heard in a 12A-rated film. None of that nonsense that the writers of Arrival and La La Land tried (aka shoe-horn an f-word in just to get the PG-13 rating). The usage of the curse in Love, Simon was clinical, well-delivered, and in the receiving person's case, so well deserved. 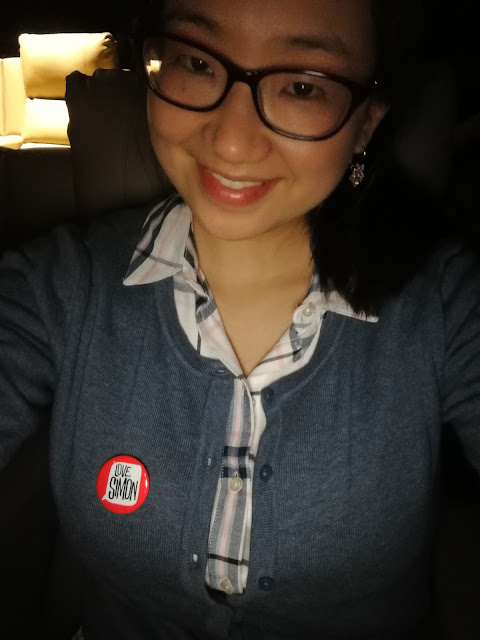 Me before the Love, Simon preview screening. Everyone deserves a great love story!

So yass, just as with Black Panther, everyone go see this movie!!