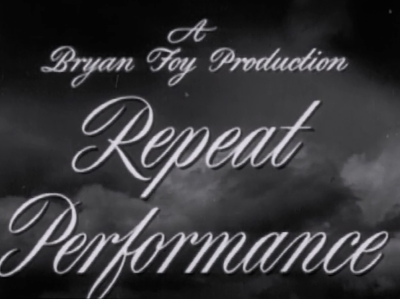 Just before the turn of the New Year of 1947, renowned stage actress Sheila Page (Joan Leslie) shoots her emotionally abusive husband Barney, having reached her limit regarding his philandering and alcoholism. She regrets it immediately, wishing for the opportunity to go back in time to avoid making this mistake. Miraculously, as the clock chimes midnight, her wish is granted, and she finds she has been transported back to the beginning of 1946. 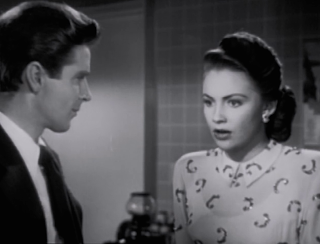 Alfred L. Werker’s drama plays like a blend of It’s a Wonderful Life with Groundhog Day, via the well-known trope of errant husbands. There is no doubt of the protagonist’s devotion to her cheating husband, even if, like Bette Davis’ character in Of Human Bondage, he doesn’t display any qualities that merit such love.

Despite Barney being a total cad, it is revealed that he, a playwright, gave Sheila her first big break as an actress, and thus, her patience towards him is heavily inflected with gratitude. But as her close friend William notes, ‘You can’t feel grateful to him forever. That’s going to wear thin at some point’.

Whilst Sheila’s success as an actress is part of the reason why she loves him so much, it’s precisely this why Barney’s so embittered towards her. Just as his play was the springboard for Sheila’s career, it was also the last good thing he produced, and watching his wife thrive whilst his own career stagnates fomented increasing feelings of bitterness towards her.

This sad but not uncommon facet of relationship dynamics is captured with simplicity and intelligence by Walter Bullock’s fine screenplay. Ultimately, though, what makes Repeat Performance the compelling drama it is is Joan Leslie’s committed, magnetic lead performance as Sheila. 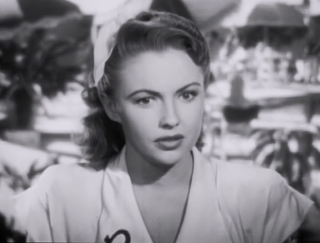 She deftly juggles conveying the actresses’ loyalty and sense of indebtedness to Barney, with frustration at his drinking and flagrant disrespect to her, with some naïve hopefulness that, in fate giving her a redo, things will be OK between them.

Even if the audience know better than her regarding this last part, her sense of wanting the best because she’s blinded by love is identifiable.

She’s well supported by Richard Basehart, in his first film appearance, as her confidante, a poet with a few screws loose. The fact that his character is slightly unhinged lends well to him believing Sheila’s plight, and giving her some necessary moral support. Basehart portrays this unusual character with wit and a bemused knowingness.

Playing her producer, Tom Conway epitomises stoicism and quiet dignity as he both humours and accommodates Sheila’s aberrant behaviour when she re-lives 1946 again, partly motivated by the fact that he’s clearly got a soft spot for her.

In a late scene where she confronts her husband’s mercenary mistress, Sheila seethes, ‘if only you knew how much he meant to me… how much I meant to him before he met you’, articulating one of the points of view that rarely gets a voice in cinema (that of the jilted wife) with devastating pathos and clarity. 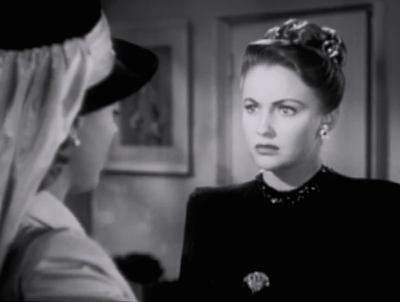 Repeat Performance explores the intriguing premise of, what would you do differently if life gifted you a mulligan. The film postulates that even if you altered your behaviour, ultimately, you can’t cheat fate. This idea is executed well, with compelling noir-ish touches and some unexpected plot twists.

In getting to repeat 1946, Sheila goes out of her wait to avoid acting in a play written by Paula Costello, the predatory woman who would go on to seduce her husband. Rather than obviating Barney’s temptation, however, events simply transpire that bring Paula into Sheila’s path anyway. 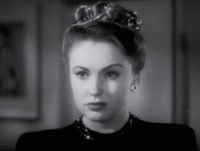 As William Williams, who’s off-kilter perception of the universe mean he accepts the ‘repeat of 1946’ thing with few questions shrewdly notes, "Destiny is a stubborn old girl, Sheila. She doesn't like people interfering with her plans. But we tricked her, didn't we? Anyway, I don't think she cares about the pattern as long as the result is the same."

For its clever and interesting take on predestination and fine performances, especially by Joan Leslie, Repeat Performance is a  film you ought to fit into your life path.

Hello, I enjoy reading all of your article. I wanted to
write a little comment to support you.

Hello, everything is going fine here and ofcourse every one is
sharing information, that's in fact good, keep up writing.

not to be overlooked is the George Antheil music, especially at last part of film.