This is a BBFC-ccentric blog. In the great tradition of the BBFC, I will now preface articles on film ratings with a film rating (how meta, eh?).

This entry would be rated 12A for references to murder, sexual threat, racist behaviour and snide digs at certain druggie actresses.

Midnight Sun, a film which I have no interest in seeing (it stars that meth-head Bella Thorne (for future reference, just so you know, whenever I refer to ‘Meth-head’, I’m talking about Bella Thorne, and ‘Cokehead’ is Cara Delevingne), recently got handed a rather interesting BBFC insight.

It is rated 12A purely for ‘underage drinking’.

There are scenes glamorising alcohol use in which teenagers, including some who are underage, attend a party where they play drinking games and do shots.

Seems a pretty draconic reason to hand out a 12A certificate, no? The actual 12A rating itself I’m not going to quibble with too much, as it got PG-13 in the States and 12A in Ireland, so it’s probable that the BBFC just didn’t want to stick out like a sore thumb by giving it a PG rating.

But at least Ireland came up with a semi-plausible reason for their 12A, citing ‘moderate sex references’. By giving a film a 12A purely for underage drinking, the BBFC have opened up an unwelcome can of worms, a can of worms which BBFC pedants like me are quick to catch on to.

See, Love, Simon, another 12A-rated film, also contains a party scene where the characters (who are in High School, and thus underage), drank alcohol. Yet Love, Simon is rated 12A for ‘infrequent strong language, moderate sex references’, with no mention of the underage drinking in the extended insight or short insight.

I flagged the BBFC on this discrepancy:

Hi,
I noticed that the title MIDNIGHT SUN was rated 12A for underage drinking. The extended information for this reads, 'There are scenes glamorising alcohol use in which teenagers, including some who are underage, attend a party where they play drinking games and do shots.'

If drinking when underage is a category-defining issue, I was wondering why it wasn't flagged anywhere (neither in the BBFC short insight nor the extended information) for the 12A-rated LOVE, SIMON, seeing as that film also contains a party scene, where the protagonist and a few of his friends (who are all of High School age, and thus, under 21 in the US) play drinking games (beer pong), and then he sings karaoke when inebriated. The general portrayal of drinking in this scene also gives the impression that alcohol is fun.

Finally, I was wondering if it was worth flagging the scene of homophobic bullying in LOVE, SIMON in the extended information, as the scene has potential to cause viewers distress.

Notice the friendly way I signed off, as a homage to the film I was questioning them about.

Their response was about as useful as their e-mail to me about Red Sparrow, aka, not at all:

Dear Emma
Thank you for your email.

The extended information that the BBFC publishes, called BBFCinsight, is not an exhaustive list. Instead it focuses on the key classification issues that led to a films rating in order to warn audiences of the type of content they may encounter in a given title. We must balance the need to warn audiences against the risk of spoiling their enjoyment by providing too much information.

The category defining issue in Midnight Sun is the underage drinking. As such this issue is flagged in the extended information (BBFCinsight). In the case of Love, Simon, the key classification issues that led to the 12A rating are the moderate sex references and infrequent strong language. This is why these are detailed in the BBFCinsight and not the underage drinking or scene of bullying that you mention.

Thanks for nothing, ‘Joe’. Your response makes no sense.

The fact that the key classification issues were the language and sex references in Love, Simon does not preclude the film also getting a 12A for underage drinking; the three aren’t mutually exclusive. If Midnight Sun was 12A-worthy for its party scene alone, then Love, Simon’s short insight should technically be ‘infrequent strong language, moderate sex references, underage drinking’, as everything that contributes to the 12A rating is meant to be flagged.

As Midnight Sun got a 12A purely for its boozing scenes, that, by implication, means that any 12A-rated film with a similar scene should also have the alcohol consumption flagged. This is why Midnight Sun’s 12A reason was so ridiculous, and by extension, the BBFC’s usual non-reply of an e-mail, so crud and uninformative.

I called them out on their inconsistent B/S and they couldn't handle it. Their way of coping? Telling me about their guideline process (thanks, BBFC. I didn't know that!)

When they’re not being all kinds of inconsistent with their clearly arbitrary guidelines, the BBFC are making jarring mistakes pertaining to the plot of movies.

I recently watched Detroit, which, despite Will Poulter’s intense, standout performance as a sadistic policeman, the film really wasn’t very good, and contained some of the clunkiest dialogue I’ve heard in a while.

The film is loosely based around Detroit riots of 1967, where some racist policemen abused their power around a group of black men in the Algiers motel. In the film, they find two white women hanging out with a black man, and outdated attitudes towards interracial socialising in the 60s caused these policemen to act out in the most reprehensible manner. 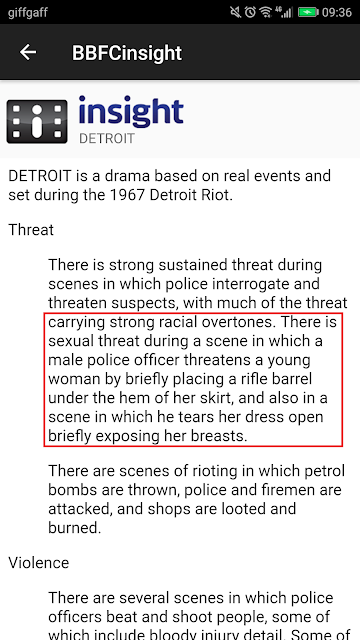 The bit I’ve highlighted is factually incorrect. Whilst it’s true that Will Poulter’s character harasses Kaitlyn Dever’s character by placing the barrel of his gun up her skirt, it’s actually another policeman altogether (played by Ben O’Toole) who pulls the dress off another woman (played by Skins’ Hannah Murray). 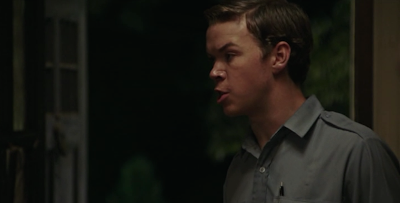 The BBFCinsight implies both these incidences occurred between Poulter and Dever’s characters, which is just wrong.

I have to say, for a film centred around racialized violence, the BBFC could not have picked a worse choice to get all the white characters confused with each other.

If the Detroit mistake wasn’t bad enough, here’s another, even more fundamental mistake which makes me again postulate just how much attention the examiners pay the films they’re being paid to watch.

From the extended information for Steven Spielberg’s latest offering, Ready Player One: 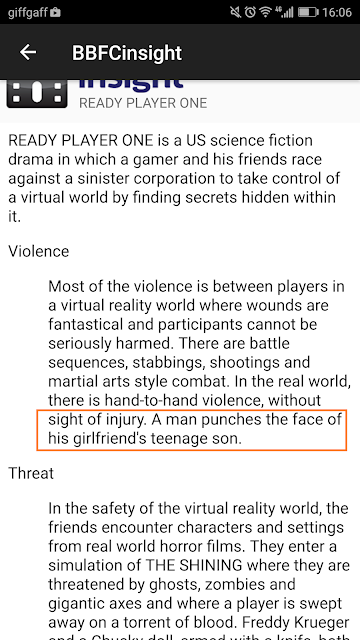 The person who beats Wade up is his aunt’s boyfriend, not his mother’s. I don’t understand how the BBFC could get them mixed up, as Wade Watts (Tye Sheridan’s character), refers to her as his aunt about five times throughout he film, and tells us that his parents died when he was a kid.

Oldham-born actress Olivia Cooke stars in Ready Player One. She’s also in Thoroughbreds, a less mainstream film, about two pretty yet privileged princesses Amanda and Lily (played by Cooke and another British rising star, the girl with the arresting, wide set eyes, Anya Taylor-Joy) in Connecticut, who scheme to murder Lily’s arrogant stepfather.

Unsurprisingly, given that plot conceit, the trailer hinted at something dark and edgy, a hunch which was seemingly corroborated by the MPAA insight (Rated R for disturbing behavior, bloody images, language, sexual references, and some drug content) as well as the IFCO’s information box: 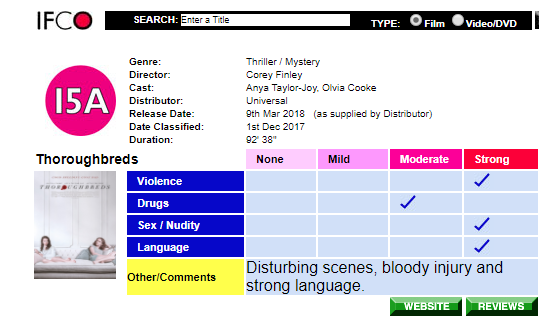 Well, having seen the film, I have to say these warnings might be the overstatements of the year.

Any violence that does occur in the film is completely off-screen, with the aftermath just consisting of a person covered in blood. So you don’t even see the dead body.

I would love to know what compelled the MPAA and IFCO to describe this film as ‘disturbing’. The fact that it’s two teenage girls plotting murder does give the story a certain degree of frisson, but  so little is shown, and honestly, for the most part, Thoroughbreds is just Amanda and Lily talking (and talking and talking and talking).

"Mean Girls with f-words" would be more accurate. Nothing about the film disturbed me.

An example of when the IFCO have accurately described a film as disturbing or unsettling: 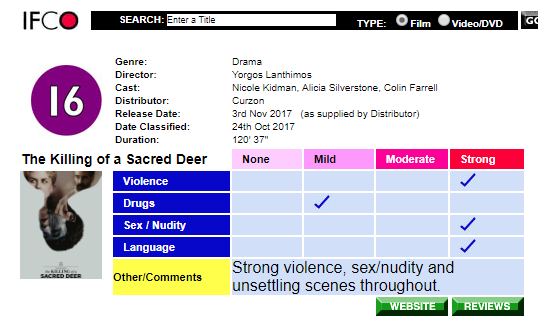 Now, A Killing of a Sacred Deer, that WAS disturbing…

I’m crazily into my film ratings. It means I’ve watched stuff like Isle of Dogs and Red Sparrow just to critique the BBFC’s ratings decisions. For my extensive, super-nerdy archive (I am to film ratings what Mr. Perlman in Call Me by Your Name is to ancient archaeology!), click here.
Posted by Emma at 4/13/2018 07:33:00 pm

Hello to every body, it's my first visit of this webpage;
this webpage includes awesome and really excellent stuff designed for visitors.

Face paints, edible body paints, and costume specific
props are only able to supplment your experience. Plus size lingerie won't revamp your love life but additionally boost your confidence.
People who are interested to buy a group on their own can shop automatically,
while those people who are seeking to give lingerie being a present never have to end up
clueless about what to buy.