Dishoom’s reputation precedes itself. Due to great word of mouth, the Shoreditch venue, as with the Covent Garden venue, which I have also been to, doesn’t allow bookings unless the party is of six people or more. If you’re in a party of five people or less, you have to queue on the door, with the length of the queues ranging from half an hour to an indefinite period of time. 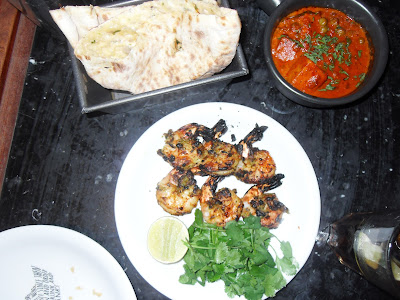 The menu claims these prawns are 'succulent'. They tasted dry to me.

The food I’ve had in both the Covent Garden and the Shoreditch venues were both good, but grossly overpriced for the quantity of food on offer. I ordered masala prawns for starters, rather naively, as a main, at the Shoreditch Dishoom.

I must have subconsciously thought that as it cost over ten pounds it must constitute a substantial plate-size, and if what I ordered wasn’t sufficient, the waiter would tell me, but he didn’t, and when they arrived, I was very underwhelmed; the amount of food there was would barely pass for a starter. There were six prawns in the entire dish and they were absolutely tiny; a bit of a liberty giving they charged £11.20 for the dish! I wasn't born yesterday either - covering 40% of the plate with leaves does not an adequate meal make. 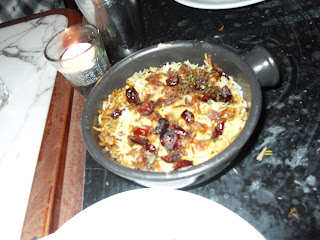 As such, I also had to order a main, the Chicken Berry Britannia, which proved to be somewhat of a mixed bag. This chicken tasted good and the zesty herbs really brought out the seasoning of the poultry, but for £8.90, again, there was far too little for the amount charged (see the photo above). The rice was disappointingly bland and there was too much of it (so that less of chicken, the more expensive ingredient, could be used), and whilst the novel use of cranberries was a nice idea in theory, it didn’t gel with the rest of the flavours particularly well.

The thing I like most about Dishoom are their curry sauces, and these didn’t disappoint. Their sauces are like nothing I’ve sampled before, especially the thick, moreish texture. The chefs have expertly straddled the fine line between tantalisingly spicy and tongue-burningly hot (if only Crystal China shared their comprehension of such nuances...)

I had a Kingfisher beer to drink, which was pleasingly light and counterbalanced the flavour on instances when the curry was getting too much. However, whilst the beer went down well, its price, like everything else on Dishoom's menu, was harder to swallow: £4.20 for a measly 330ml portion of beer was daylight robbery that the Orpington branch of the Odeon would be proud of.

The atmosphere in the Dishoom branch of Shoreditch is great, and we were seated in a prime area where we had our own space, yet where we could be spotted by waiters if we wanted to flag them. The service was elegant, without being haughty, as some neighbouring Shoreditch venues sadly are.

Overall, Dishoom is undeniably better than the generic Brick Lane curryhouse (given some of the ones I’ve been to, I daresay that’s not hard). But ultimately, it’s jazzed-up takeaway food with triply-jazzed-up prices.

Given the wealth of options for places to eat in London, Dishoom doesn’t do anything to merit a repeat trip. Heresy in food blogger circles, perhaps, but that’s just how I feel.