I’ve trialled lots of cuisines in my experience sampling London’s restaurants, but one country’s dishes which I haven’t had enough exposure to is Australian food, and I sought to rectify this by sampling the food of Lantana, which I had heard good things about. 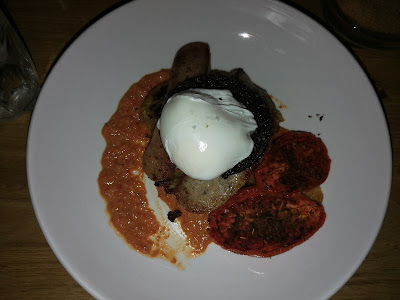 I absolutely loved it. The poached egg was one of the finest I’ve had, and the tomatoes had been roasted exquisitely. The tomatoes’ soft texture complemented the rest of the meal, which was quite solid.

I’ve historically found that sausages tend to be the weakest part of breakfast menus, because they tend to cost the most, and profit-driven cafes and restaurants would rather opt for the value brand instead of the Taste the Difference.

By virtue of the fact that the portion here aren’t that big, the chefs know that the diners will be paying closer attention to the ingredients they’ve been presented with. The sausages here were thus of high quality. Just like at The Pig and Butcher, there was sadly a very sparing quantity of sauce. I would have gladly consumed more muhammara.

Overall, I was a fan of the Australian-style brunch. The carbohydrate-heavy composition of our dishes meant that you can get full on less food, and the sauce was to die for. 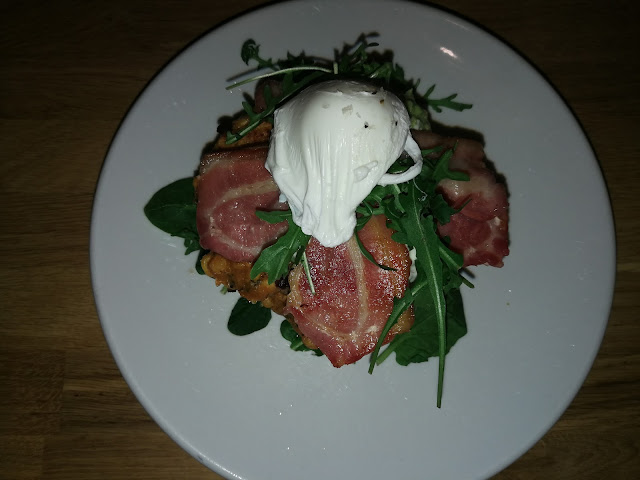 My friend had the Corn fritters stacked with streaky bacon, fresh spinach, roast tomatoes, smashed avocado & lemon crème fraiche. I’m not the biggest fan of corn fritters but they loved it (and they order this dish habitually), so if that’s an ingredient you like, it is a popular choice!

A shortcoming of Lantana is that due to its esteemed reputation, the restaurant is always busy, meaning you’ll have to wait slightly longer than average for your food to be cooked. I don’t mind that, as I would rather the chefs took their time preparing something delicious, than produce something slapdash just to turn a profit (as several restaurants in London do. Not naming any names. Ahem).

A more problematic shortcoming to the business, however, was that the restaurant suffered an uncomfortable layout as a result. Now, I get that table sizes are an indirect form of signalling. If a table/seat is too big, it gives the implicit indication that a restaurant doesn’t get enough patronage, and thus, they have to fill up lots of empty spaces with large furniture.

Basically, it’s Jay from The Inbetweeners’ oh-so-charming saying, ‘fat girls are more grateful’ in the restaurant world. The counterpoint to his maxim is ‘skinnier / hotter girls are harder work’. And that’s what the tiny table sizes in Lantana were telling me. This was a place that knew you would be likely to dine here, and thus, didn’t have to work too hard for your affections. And for that, despite the food being delicious, I’m going to have to dock it some points.