She played the fiddle in an Irish band, but she fell in love with an Englishman.

Given that romance is my favourite genre, it goes without saying that I've seen my fair share of love scenes in movies. There’s an unofficial hierarchy when it comes to how strict the BBFC, IFCO and MPAA are when it comes to lovemaking at 12A/PG-13, and it goes (from least strict to strictest): BBFC < IFCO < MPAA.

For example, the sex scenes in The Light between Oceans, Brooklyn and My Cousin Rachel received the 12A equivalent in all three films boards. About 80% of PG-13-rated sex scenes do fall in that Venn diagram intersection of BBFC, IFCO and MPAA rating sameness. 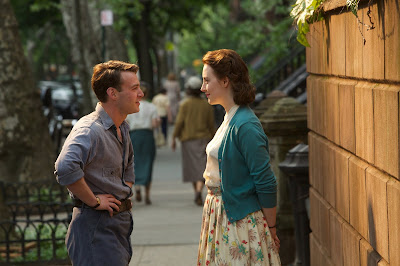 Saoirse Ronan shines in Brooklyn. She's also in the music video of Ed Sheeran's 'Galway Girl' a song I currently have stuck in my head!

The sex scenes in Anna Karenina got it a 12A in the UK and Ireland, yet earned an R rating in the States. Other films with the same rating in the three respective countries due to the sex and nudity in the movie were To the Wonder, The Invisible Woman and Mr. Turner.

And finally, there are films which only the BBFC and the BBFC alone considered containable at 12A due to its sex, with the Americans and the Irish favouring the next rating up, such as The Duchess (uncut), Never Let Me Go, Match Point, A Hologram for a King and A Little Chaos.

So, from this little pyramid I’ve painted, there’s a clear ranking in terms of prudishness of the film classification boards. Well, I’ve found a film which violates this axiom!

Maudie is a 12A in the UK and a PG-13 in America, due to ‘some thematic content and brief sexuality’. That the MPAA, the perceived strictest board when it comes to sex, as well as the BBFC, by far the most lenient (just look at that list of movies that we rated 12A) gave it the same rating equivalent, led me to think that the ‘Goldilocks’ of certificators when it comes to sex, the IFCO, would also rate it 12A. 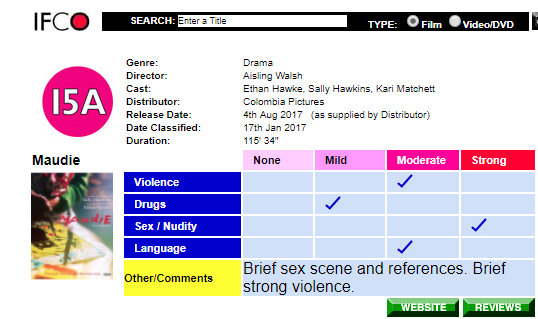 Maybe it’s the statistician that finds this so exciting, but pretty cool, huh? Something which breaks the strictness hierarchy!

Another point of interest that jumped out to me when browsing the IFCO website was that Everything, Everything, whilst receiving a 12A in both Ireland the UK, has earned its rating for two completely different classification issues: 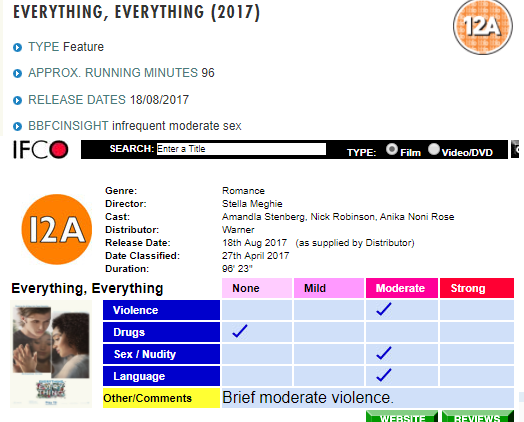 The BBFC short insight doesn’t mention the violence, and the IFCO one doesn’t flag the sex! Yet another curiosity!

I found an even more impressive example of the same phenomena. The Glass Castle, also a film that’s 12A in Ireland and the UK, has quite a long BBFC insight (four classification issues) and IFCO explanation (three things flagged), yet, amazingly, none of the seven things that the two boards mention intersect! 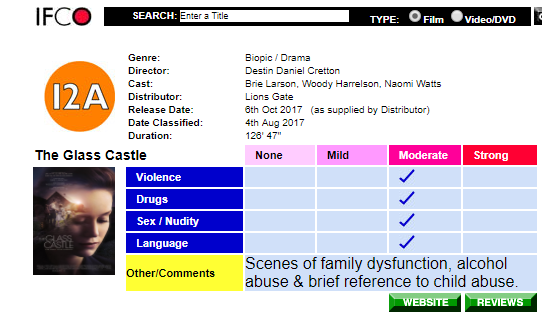 I find this very interesting because Ireland is geographically close to us, and shares common sensibilities 95% of the time when it comes to rating film, yet sometimes, the things our examiners single out as bones of contention are completely disparate from the IFCO ones.

If you found this kind of film certification nerdiness interesting, check out my other BBFC posts here.
Posted by Emma at 8/15/2017 05:16:00 pm