To get a table on a Sunday at The Pig and Butcher, you have to make your reservation some days in advance. It's quite rare for a gastropub to be fully booked up, but when I visited this venue, that's exactly how it was.

The Sunday menu offers several roasts, some available for the single diner, and others only available as part of a two-person package. On our visit, my friend and I had the beef roast to share. The roasts came with Yorkshire pudding, roast potatoes, creamed leeks and vegetables. 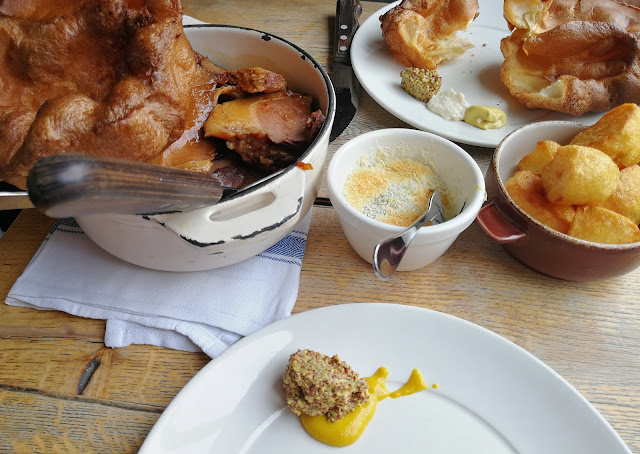 The slow-cooked beef was divine (The Pig and Butcher cook their lamb and beef rare, which is just how I like it). The potatoes were enjoyably leathery, evoking memories of the graft me and my brother put into preparing our Christmas dinner. And the leeks coated in breadcrumbs, although rather low in quantity, tasted deliciously creamy.

Unfortunately, I have some shortcomings about other aspects of the meal, as well as The Pig and Butcher overall.

Firstly, the distribution of the gravy was not good. It was all clustered at the bottom of the bowl, meaning very little was on the actual meat - the part of the meal which actually would have benefitted from the gravy. In order to reach the gravy, I had to tip the bowl and reach a spoon in, which was sub-optimal because in doing so, it meant I was disturbing the rest of the meal. It would have been far more efficient if the beef was drizzled in gravy.

The gastropub was extremely stingy with the sauces. A man came around holding a tray containing all of the sauces, and we were expected to serve a small portion for ourselves. The pots that the sauces were presented in were, in my opinion, too small for one table alone, so imagine my horror when told this was meant to last the whole pub!

Furthermore, having a man stand there watching you as you served yourself was disquieting and meant that I couldn't put as much on my plate as much as I would have liked (as that tiny amount of mustard on my plate photographed, about a fifth the size of the amount of sauce I normally like with my meals, can attest to). No doubt this was by design of the management, in an attempt to save money on sauces. I don't like this - the shared meal cost in excess of £40, so the least they could have done was let us help ourselves to the sauces. Just because I plan on watching Dunkirk doesn't mean I have to re-enact the rationing experience, Felicias.

Thus, whilst the general quality of the roast was high, I know there's definitely better gastropubs in London. And I shall keep searching for this place, rather than settling for The Pig and Butcher and Paltry Quantity of Sauces.