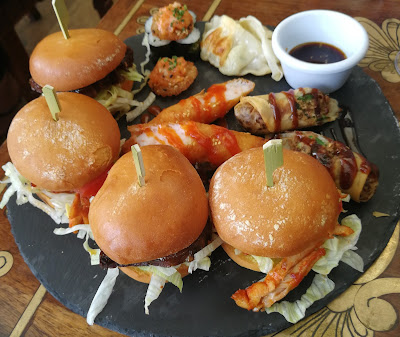 Gilgamesh advertises itself as a pan-Asian restaurant, bar and nightclub. I visited it with my brother using a LivingSocial deal that I had bought for £34. The deal entitled us to afternoon tea and free-flowing Prosecco for two hours. I personally tend to find LivingSocial deals more honourable than Groupon ones, and the 'unlimited Prosecco for 2 hours' part of the deal appealed to me.

In terms of the savoury part of the food, it was hit and miss. The shrimp (centre of the photo above) was by far the best part; unrelentingly tasty and coated with a moreish hot sauce. The burgers, on the other hand, were Phoning it In 101. The meat (two of the burgers were beef, two, chicken) tasted extremely suspect.

Just a close-up of the sub-standard burgers will show that the ingredients were not the most refined: 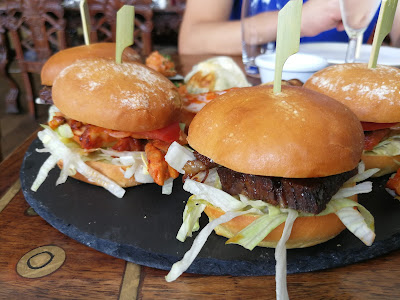 Despite the chicken burger being resplendent in colour, the strips of meat had unfortunately not been seasoned very well and the lazy option, of just coating them in sauce, had been taken. The presentation of slices strips of misshapen cabbage jammed in the burgers needed work, and chewing the stubborn slabs of beef was a task unto itself.

More pleasing was the fact that each table had a small pot of soy sauce, which I happily coated my food with (none of the Pig and Butcher-style non-allowance of condiments here!) 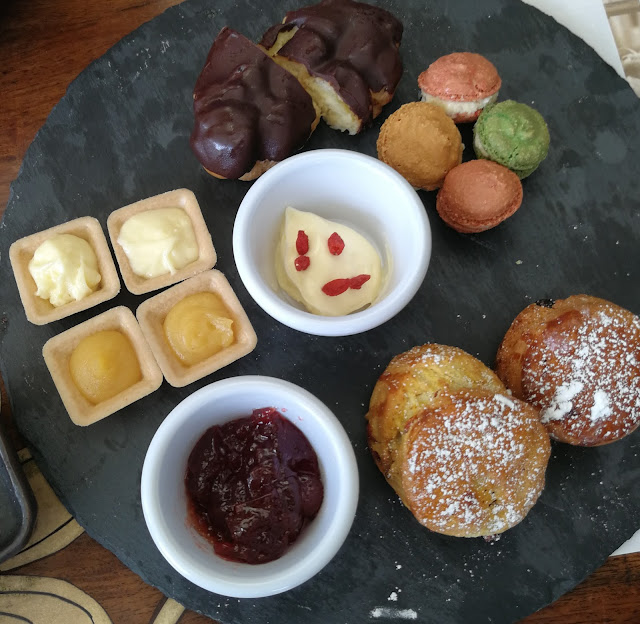 The sweet treats fared better in terms of consistency, with all the items presented above tasting good. We could have done with there being more of clotted cream, and the jam was rather clumpy, but apart from that, this was a decent haul.

The macarons looked tiny, but a good illustration of the 'good things come in small packages' adage, because they blew the pretentious overpriced Laduree desserts out of the water.

Whilst the food was overall edible without being anything special, the alcohol is where one claws back the monetary value of the LivingSocial deal back. Unlike the 'unlimited Prosecco' at the place The Wine Stores, Kings Cross which was glorified cat piss presented in a carafe, the Prosecco at Gilgamesh was very easy on the tastebuds.

Even my brother, who by his own admission doesn't like fizzy beverages ordinarily, loved it, and was hailing the waiters to refill our glasses each time we'd emptied them. Here's a photo of the cheeky chap in a state of refinement: 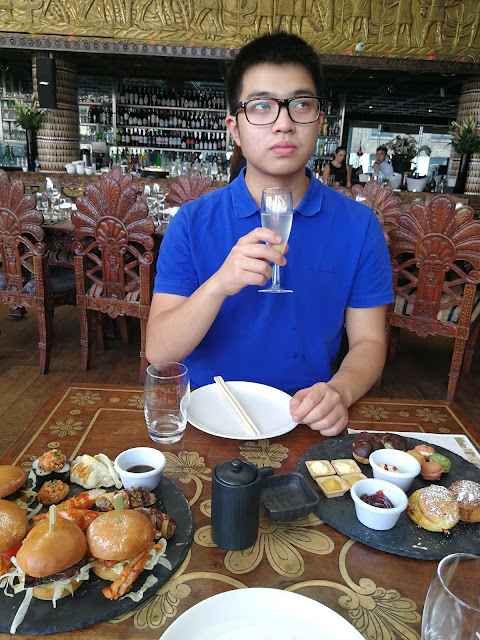 So, whilst the afternoon tea was generally pretty pedestrian, Gilgamesh had such an opulent vibe that it nonetheless proved an enjoyable way to spend two hours on a Saturday. And the quality of the Prosecco went far and above its Internet coupon roots.

I used to be able to find good info from your blog articles.

Very nice write-up. I absolutely love this website.
Stick with it!