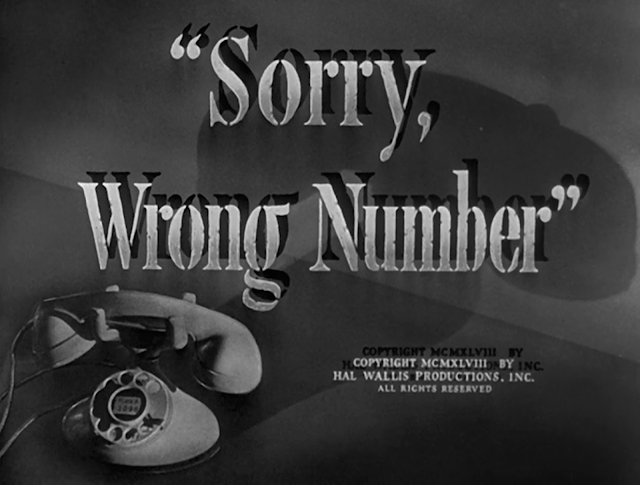 This post is as part of Midnite Drive-In’s Film-noir blogathon. Movie bloggers all over the internet are coming together to discuss a wide range of film noirs, both well-known and less established, so do head on over to that fabulous blogathon and enrich your film knowledge! 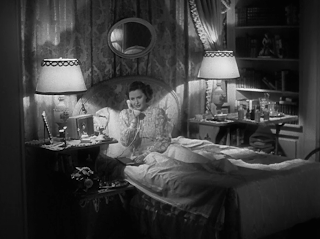 Leona Stevenson is the rich only daughter of a pharmaceutical magnate. She is also invalid, and in NYC from Chicago to consult with a doctor about her health issues. At the start of the fil m, it is apparent that her husband is avoiding her, screening her calls. His absence is even more gaping by the empty chair he leaves, which Leona addresses plaintively. In a stroke of (mis)fortune, she overhears two men’s plots to murder a woman at 11:15pm, with the time meticulously chosen so that the sound of the crime will be masked by a passing train.

She reports it to the police and then her father, but both efforts fall on deaf ears. As she becomes increasingly agitated alone in the Manhattan apartment, she tries to locate her errant husband, only to inadvertently piece together the context of the phone call she overheard, which she involves her more than she’d care for.

One of Barbara Stanwyck’s four Oscar nominations for Best Actress, Sorry Wrong Number came out four years after her iconic turn as conniving seductress in Double Indemnity. Both are film noirs with a heavy sense of foreboding, but playing a bedridden character, her physical repertoire is limited here. Whilst she slinked around (who can forget that anklet and the way she shimmies down the stairs to show it off?) in Double Indemnity, she spends the majority of Sorry, Wrong Number fretting in bed. It’s a difficult role that only someone with the screen presence and acting guile Stanwyck is blessed with could pull off.

Graciously for her, she does get to stand up at some point in the film: a good proportion of the

story is told via flashback. We discover how she and her husband (Burt Lancaster) met: he was actually at a dance with a girl called Sally Hunt, who plays an integral part in helping Leona piece together the clues. Leona, never having been deprived anything she wanted in her life, boldly makes a play for Henry. He’s initially put off by her entitled attitude, but, nonetheless, his head is turned by her wealth. Stanwyck conveys her character’s bratty attitude wonderfully: in one scene, she regards her husband with a contemptuous glance in that signature way Barbara Stanwyck looks people up and down. You mirror Lancaster's character's feeling of belittlement when it occurs.

Lucille Fletcher penned the script for Sorry, Wrong Number, which was originally a radio play by her. The translation is effective: few sets are required in Sorry, Wrong Number, and the art decoration of Leona’s grand but stuffy bedroom is conveyed excellently: she has expensive trinkets and bottles, but her loneliness is clear. The moral that money can’t buy happiness is an age-old one in cinema, but this message is conflated with another: money being the root of all evil, which motivates some shady actions by certain characters. Thus, the script, ahead of its time in this sense, touches on an almost Kafkian problem: the more Leona feels her husband pulling away, the more she tries to throw money in the problem, which in turn, makes him increasingly more detached towards her.

The cinematography dextrously plays with light and shade, true to the genre, to create ambiance and dread throughout the film. Also, in the vein of film noirs, there are few truly "good" characters (I would argue only Sally, Leona's former classmate who's love she stole in such a cavalier manner, is), and plenty of murky ones. Even our protagonist, who finds herself in increasing danger, is somewhat hard to take and completely root for, her arriviste persona accentuated by her plush wardrobe, multitude of expensive rings, and Stanwyck's virtuoso performance as a woman who refuses to see what's going on right under her nose, causing the audience to fear the moment the House of Cards will crumble. 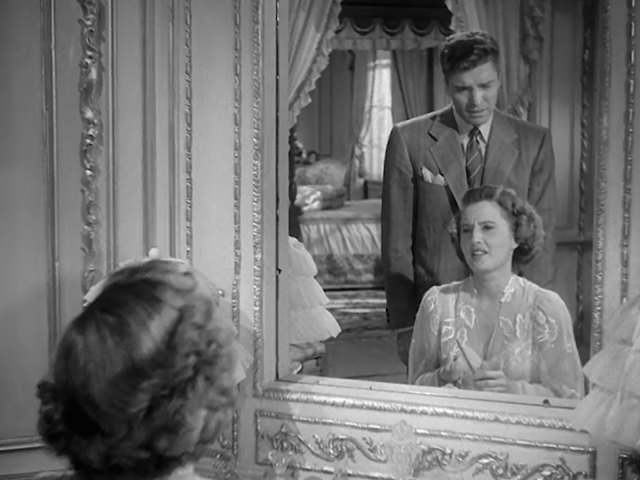 The employment of flashbacks and the film being played in real time give Sorry, Wrong Number a real sense of urgency, and the protagonist being confined to their room gives them a powerless sense that makes this film a worthy predecessor to the more polished Rear Window. The beating heart of the film is Barbara Stanwyck; I can’t believe she never won a proper Oscar during her lifetime especially when frauds like Jennifer Lawrence and Natalie Portman have them! As mentioned, Leona is not likeable at all, treating other characters in the film as below her and talking down to everyone. Yet Stanwyck is able to inject sympathy into even an upstart like this! By the end of the picture, she has you rooting for Leona, warts and all.

The Academy gave her an honorary award in 1982, whilst she was still alive, though, for “For superlative creativity and unique contribution to the art of screen acting”, and that is exactly what she has, in spades, here. Without her, Sorry, Wrong Number would have been a fairly exciting film. With her, it’s a complete and utter thriller.
Posted by Emma at 8/12/2016 08:37:00 pm

Super essay on a wonderful film, one of Stanwyck's greatest performances. As you noted, only a versatile and skilled actor could make this neurotic character so compelling and unforgettable.

Hi Chris, thanks so much for reading my review :') And Stanwyck was a really talent, can't wait to make my way through which films of her's I haven't seen!

Like you said, it's incredible to think that Barbara Stanwyck (!) never won an Oscar, especially when you see a performance like the one in this film. Her character is unlikable and sympathetic at the same time, which is quite a feat.

I think this film works well as an adaptation of the radio play – it's certainly every bit as tense.

Great review! It's time to see this film again. :)

This one seems a bit claustrophobic to me. I haven't seen it. But it is one of my "Dead Men Don't Wear Plaid" movie clips that I am determined to watch just because it was a part of that movie. It's that dread of stirring up my own claustrophobic tendencies that have made me put it off so far. Good review, though.

Hi Emma, nice review! One of my favorite noir films of all time...I think it tells its story so well, and I love the constant use of flashbacks. The ending is one of the more tense wrap-ups I've ever seen in noir...definitely heart-stopping (pun intended!) if you're in Stanwyck's shoes!

Wonderful choice and review. The film compares nicely to the excellence of the original radio drama and I think that is all due to Barbara Stanwyck.

Barbara Stanwyck is one of my absolute favorite actresses!
Nice review!

I've heard the original radio play a couple times, but haven't seen the movie version yet, which is kind of silly of me, considering that I'm a fan of Stanwyck's. Thanks for reminding me that I need to find and watch it!

Sorry, Wrong Number was the frist Stanwyck film I've seen, and I was hooked. She has a great performance, and I was mesmerized by the opulence of her bedroom. After reading your great review, I want to watch it again!
Don't forget to read my contribution to the blogathon! :)
Cheers!
Le
http://www.criticaretro.blogspot.com