Disney Pixar have made some incredible movies, several of which are in my personal top 100 movies list (such as Up, WALL-E and Inside Out.) Finding Nemo is my favourite of all of those; a film so beautiful and affecting that just hearing the track ‘Nemo Egg’ brings me to tears. Finding Nemo's message of the importance of family, and the lengths one will go to protect them, really struck emotional chords with me.

I was full of trepidation for the sequel, Finding Dory, a film which I thought really did not need to be made, full of Marlin-esque fear that, like he almost did in the first film, this pointless follow-up would cause me to "lose" Nemo. 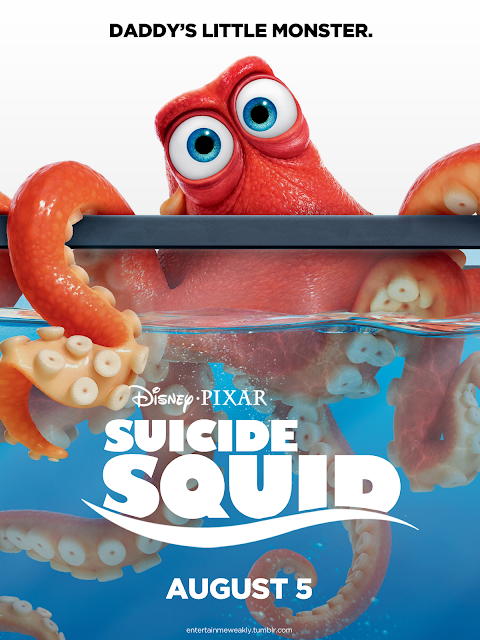 (I picked this poster because the tagline is the T-shirt Margot Robbie wears as Harley Quinn in Suicide Squad, which is out this Friday and I'm stoked for!!)

And, sad to say, my fears were realised. The issue with Finding Dory that troubled me was how artificial the conflict was: in one of his strops, Marlin says to Dory, “Go right over there and forget, Dory. That's what you do best.” Now, I get that people say things they don’t mean when their emotions get the best of them, but even in a fit of rage, you wouldn’t say something that hurtful to a friend, especially a friend who played no small role in getting your son back in the first film. People audibly gasped in the cinema when he said that, which illustrates that the writers overplayed their hand and misjudged the tone.

I feel like I’ve been criticising scripts left, right and centre this year (The Neon Demon was poorly written, that bad Chinese romance I watched had a bad script, yada yada yada), and probably, line-for-line, Finding Dory is no worse written than something like Despicable Me, a film I have quite a soft spot for. But in that one line, it just felt like the writers of the film realised they didn’t have enough for a feature length film, so had to manufacture some drama, in doing so, make Marlin make this harsh comment which was really out of character. Furthermore, as part in punishment for what he said, Nemo takes a rather annoying turn in this film as well, constantly chastising his father and acting bratty, which again, undercuts their father/son bond that the first film built so effectively.

Other elements of the screenplay that jarred were that weird, unfunny Sigourney Weaver onrunning joke (like, what? This is about fish, not aliens, so I didn’t even see the point of it), and the lazy characterisation of Hank, the seven-tentacled octopus. Stanton et al were obviously trying to place a ‘crusty old cynic’ character into the storyline, but that trope was employed to much better effect in the form of the mean restaurant critic in Ratatouille, because they explored why it was that he was so jaded. In Finding Dory they just shove a bad-tempered character in as a foil to Dory's good nature, but we already had Marlin for that.

This is predominantly why Finding Dory isn't fit to tie Toy Story 2's laces in the sequel stakes: in Toy Story 2, the writers both retained the central dynamic between Buzz and Woody, as their friendship, like Marlin and Dory's, is crucial to driving the plot and getting audience members connected to the characters and their plight. Furthmore, the characters introduced in Toy Story 2 were welcome and contributed to the quality of the film (I'm thinking of awesome cowgirl Jessie). This is definitely not the case in Finding Dory, where existing characters are hard done by in terms of character development, and new characters are downright superfluous.

This is epitomised in these two Cockney sea lions (voiced by Idris Elba and Dominic West; the film’s producers desperately trying to appease adult audiences with a The Wire reference, there) that felt like Pixar were trying to regain the belly laughs they had with the seagulls in Finding Nemo (rather than chant 'mine! Mine' the sealions chant 'off! Off!'), but it didn't work, especially as the way the two sea lions ganged up against a third, cross-eyed lion, felt borderline ableist.

The film's pedestrian plot (Dory finding her parents, who she suddenly remembers she'd lost) is given more emotional gravitas than it deserves by Thomas Newman's sensational score. The more eagle-eyed readers of my blog may remember that Finding Nemo features my favourite film score of all-time, so good that they often use excerpts of it on The Apprentice. The score for Finding Dory, whilst not quite as good as that (nothing ever will be), has to work twice as hard, given it is almost the only thing (along with Ellen DeGeneres voicework) that is selling this contrived story to us. The addition of a plaintive violin to highlight Dory's sense of isolation definitely contributed to the emotion of the film, and, as he did in The Shawshank Redemption, American Beauty and WALL-E, Newman deftly allows his music to accompany the plot without feeling intrusive. It's a travesty that this genius doesn't have an Oscar.

In isolation, Finding Dory isn’t a bad film at all. It’s got charm aplenty (baby!Dory with her massive  purple eyes and high-pitched voice is absolutely a-dory-ble #IllGetMyCoat) and in terms of jokes-to-laughs ratio, it scores above your average cartoon. Plus I simply couldn't hate a film that gives two members of the Modern Family cast voice roles. But Pixar isn’t an “average” studio, and its predecessor most certainly not so. I’ll be kind and make like the good-natured heroine of this film and invoke her memoryless property in awarding my rating. If I were to grade it in comparison with the first film, my score would be dramatically lower.

Put it this way: as Sia's cover of 'Unforgettable' came on over the closing credits, I was hoping that Finding Dory would achieve quite the opposite in my mind.