15 years on from the BBC's mockumentary covering Britain's thirstiest boss, Brent is Back. Except, rather than back in the domain of being a Regional Manager, he's now a sales rep for Lavichem, a toiletries distributor. His heart, however, doesn't lie with tampons; he wishes to make it as a rockstar. So, impetuously and not at all financially judiciously, he cleans out his pensions fund to pay four musicians, an aspiring rapper Dom (Doc Brown, aka Ben Bailey Smith aka Zadie Smith's brother) and a sound engineer to go on tour with him as the band 'Foregone Conclusion'. A three week tour around Berkshire, to be precise. 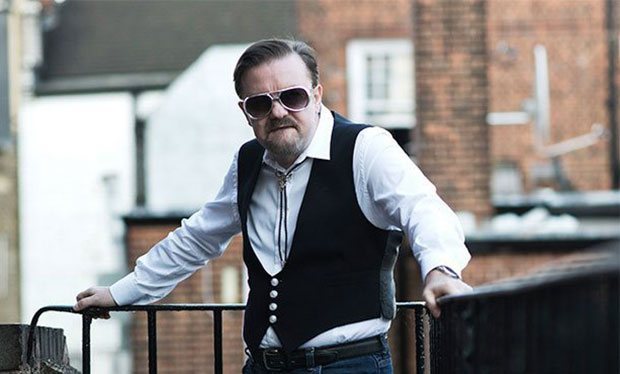 As a big fan of the TV show, I was expecting cringe and situational comedy aplenty in David Brent: Life on the Road, and to that end, the film certainly delivers. Probably a little too much so. Brent's self-funded tour is, not surprisingly, a complete crash and burn. The four musicians can play their instruments and the sound engineer (played by Tom Basden) has experience aplenty, but no amount of aural wizardry could come close to atoning for the sheer egotism of the band's frontman.

Brent's delusions of grandeur, thinking he's singing about matters of substance (from racism, to disabled people, to the plight of the Native Americans) is toe-curdingly embarrassing. The cringe factor is compounded by his complete lack of self-awareness, and the earnest look on Brent's face as he delivers lyrics like 'they fly like an eagle, sit like a pelican' about the Native Americans. As audience numbers dwindle and Brent's sense of isolation kicks in, he actually has to pay his bandmates just to have a pint with him. It's mortifying, and where there should be laughs, we're just feeling unease.

But there's now a glossiness to David Brent: Life on the Road that betrays the films' TV roots. The film looks like a film, what with overhead tracking shots and excellent sound design (which must have been down to Gervais wanting the best possible platform to exhibit his pipes). But in having good production value, the intimate air that the TV show has been lost. And, even more of an issue, because the film uproots Brent to a new company with a new group of colleagues, you're not able to engage with them in the film's 90 or so minute running time.

For example, David Brent's only friend at Lavichem, Nigel (played by Phoneshop's Tom Bennett), admits that nobody really gets him, and hence why he and Brent gravitate towards each other. His social clumsiness make him a sitting duck for the rest of the office. It's not nice watching him get bullied, particularly as he definitely isn't an ill-meaning person, and I feel more character development on his part would have made the movie a more satisfying viewing experience.

The fact that Nigel doesn't get to come into his own and is relegated to the role of a sideshow is because this film, quite clearly, revolves around Ricky Gervais David Brent. Gervais writes, directs, stars, and, much like his cinematic counterpart, he can't stand it when the spotlight isn't on him. The fact that Gervais' most authentic acting in David Brent: Life on the Road was the scene in which  Brent jealously watches Dom, the rapper he 'befriends' (mainly as a get out of jail-free card for his un-PC jokes) rapping to the adulation of a crowd, speaks volumes.

Still, credit to the supporting players who are still able to make an impact despite their paltry screen time. Ben Bailey Smith captures the viewers emotions perfectly in terms of his reaction shots to each of Brent's misguided quips, and his rapping style is understated but incisive; the perfect foil to Brent's bloated singing style. Tom Bennett genuinely moved me as Nigel. His character has a bit of Mackenzie Crook's Gareth's zaniness, a bit of Martin Freeman's Tim's quiet compassion, as well as injecting a third element, of the overgrown schoolboy who sadly never outgrew getting picked on. And finally, Tom Basden, as Foregone Conclusion's Sound Engineer, is a dignified presence throughout the film, his low tolerance for Brent's crap gradually softening as his watches him go through degradation upon degradation.

These three British talents are good factors that contribute to the quality of David Brent: Life on the Road. But what stops the film from achieving greatness is the sheer, unrelenting narcissism of Gervais. This was never really a film that needed to be made; The Office's co-creator, Stephen Merchant's absence on this film speaks volumes. Like Finding Dory, the superfluous sequel that should never have been made, this film is overkill.

The Office Christmas special was the perfect time to end it, because it balanced tying up story loose ends with long-suffering characters getting some well-earnt redemption. I really cared about Tim and Dawn. By the end, I'd even cared about Gareth. But I didn't care about David Brent a fraction as much as Ricky Gervais wanted me to, and tries to get you to, working overtime, in this film.

Because his affection for a character he created is not mirrored by the audience, after a while, the novelty of watching Gervais play himself wears thin.

There's a sequence in the film where David Brent pays for a photoshoot, where he goes through all the masturbatory notions of gazing into the camera in all manner of provocative poses. Brent really fancies himself a lead singer in a band.

Despite all the humiliation, the awkward silences and the tiny crowds throughout the film, it's quite clear that so does Gervais.