This post is a contribution to Coffee, Classics and Craziness’ Alfred Hitchcock blogathon.

When deliberating over what film to write about as part of this blogathon, I decided, rather than to wax lyrical about one of my favourites of his (Rebecca, Rear Window, Dial M for Murder and Rope are all in my person top 100 canon), that I would review a title of his that I am more lukewarm about: Topaz. 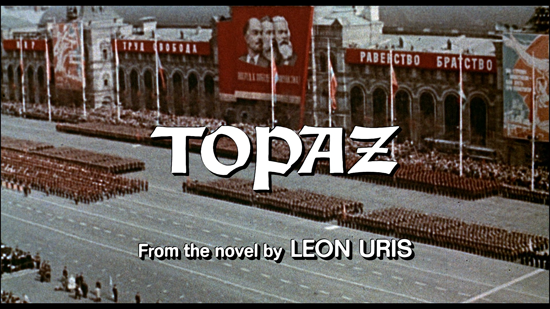 An espionage drama that involves alliances and backstabbings between the Americans, French, Russian and Cuban, Topaz is one of Alfred Hitchcock’s most leisurely works. To describe the plot in full would be to spoil it (and it’s not like me to casually spoil movies now, is it?), but, very loosely, it revolves around a Soviet officer who has recently defected to the USA, revealing that Russia plans on placing nuclear weapons in Cuba. Because an American storming into Cuba to uncover this would be too suspicious, a French intelligence man (André Devereaux) is enlisted to play spy on their behalf. A spider’s web of lies, double-crossing and collateral damage in the form of innocents getting hurt ensues.

Topaz doesn’t star any of the big A-list names who had previously worked with Alfred Hitchcock (Grant, Stewart, Kelly, Bergman, Fontaine, etc), but instead, pairs him with Frederick Stafford, playing the central character, a French intelligence officer situated in the States, and previous collaborator John Forsythe (from The Trouble with Harry and I Saw the Whole Thing), as Michael Nordstrom, a character doesn’t actually appear much in the film apart from to ask Devereaux to carry out such a favour. 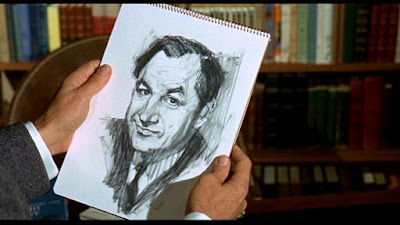 Neither actor have a huge amount of charisma in this film, and it’s a shame, because Stafford’s flawed hero (he commits acts that require a lot of valour in the film for the greater good, but also has a mistress in Cuba, thus, breaking his wife’s heart) deserved an actor of more gravitas to flesh him out. Forsythe is similarly forgettable. In the hands of two more compelling leads, Topaz would have undoubtedly been more exciting; the closing line alone had the potential to rank up there with Some Like it Hot’s ‘well, nobody’s perfect’ in terms of wry things said as a film ends. As such, it barely registers. Thus, it is to Hitchcock to do the heavy lifting in terms of manufacturing excitement. 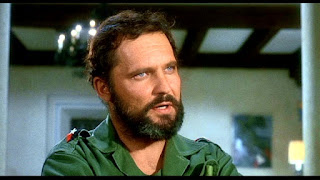 The supporting performances in Topaz are far more commendable. As Cuban revolutionary Rico Para, Canadian actor John Vernon is thoroughly terrifying. Vernon, who trained at RADA and has played roles as disparate as a mayor (Dirty Harry) and the leader of a group of strikers (The High Chaparral”), demonstrates his remarkable versatility here, commanding your attention in every scene he’s in. His piercing blue eyes just make his repellent victim the more magnetic, and he is talented enough to convey a man racked with self-doubt about his convictions, and overcompensates for it with an outwardly self-assured demeanour. Such a character arc is employed abundantly in cinema, from Meryl Streep in Doubt to Aubrey Plaza to Mike and Dave Need Wedding Dates, but John Vernon in Topaz is one of the most effective portrayals of such a character, the more remarkable given his limited screen time.

Karin Dor, as Devereaux’s Cuban lover, is just as magnetic, for different reasons: she’s drop dead gorgeous, with large doe eyes and ample lips, her beauty enhanced by the abundant wardrobe her character sports. Indeed, her purple ball gown frames her character in one of the most memorable shots of the film. Furthermore, Dor’s steamy kiss with her otherwise seemingly pulseless on-screen lover Stafford would rival even that languid smooch between Grace Kelly and Jimmy Stewart in Rear Window for title of ‘most memorable snog in a Hitchcock movie’. 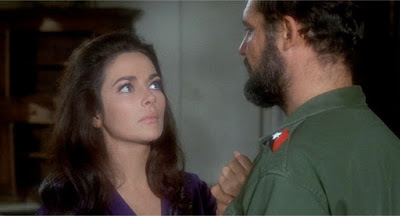 In addition to the two bland leads, the other element holding Topaz back from being a Hitchcock classic is the weird structure. The Cuba act (featuring the two aforementioned supporting players) is dense in action and extremely thrilling, as pulse-racingly tense as the airport scene in Argo. However, the scene in Argo was well-placed at the end, when the film was reaching a crescendo. In Topaz, there are two more acts that follow the Cuba segment, and everything that follows is somewhat of an anti-climax. Thus, the brilliant middle act feels somewhat disjointed from the mediocre scenes that underwhelming scenes that preceded and followed it. It’s ironic, then, that most of the film was shot on location, bar the Cuba scenes, which were filmed in L.A. They’re so stirring that the disconnect in location did not register with me.

As with the last title I reviewed, Suicide Squad, one of Topaz’s biggest burdens is the large roster of characters, each of which it tries valiantly to dedicate adequate attention to. Naturally, some fall a little short. But there are some memorable, stark scenes, symptomatic of the talent of the man behind the camera. Topaz is surprisingly disturbing for a PG-rated 1960s film, where characters are tortured, and, whilst that isn’t shown, the aftermath is suitably affecting.

Despite the faded colours of the cinematography which give Topaz something of a TV movie feel, and the lack of star power of his two leading men, Topaz is still a compelling enough watch, because The Master of Suspense is pulling the strings. There are some nice bouts of dramatic irony, moulded around one character knowing something that the other doesn’t, and the no-big-deal, almost accidental way the truth is eventually revealed. In the manner only Hitchcock can, he uses these confusions, lapses in knowledge and strategic placing of facts in snippets of dialogue (often overheard) to puppet the audience’s emotional response to scenes.

Although the pacing is ponderous and the film doesn’t grab the audience in the arresting manner the likes of Vertigo and Psycho do, there’s still plenty to commend about Topaz. Above all, it shows a director who, even when not entirely comfortable with the material and the crew he’s working with, can craft something engaging out of it. And that’s why Hitchcock is a G.
Posted by Emma at 8/11/2016 05:04:00 pm

This doesn't look like a Hitchcock film that I'd particularly like, but since I've promised myself that I'll watch them all, I suppose I'll have to at some time. :) Thanks again for entering the blogathon!

Yeah, it's definitely not vintage Hitchcock. I, like you, only watched it because I wanted to sample all his works. You have to take the good with the bad, haha!

As a Hitchcock fan, I'm a little embarrassed to confess I was not really familiar with this one, but it was fascinating to read your review on it! I will have to see this one sometime. It sounds like a much more complicated plot than many of his other films.

Thanks for highlighting a film that does not get covered as often!

Very interesting analysis. Topaz is one of my less favourite Hitchcock's films (and there aren't may Hitchcock's films that I don't like) so I was pretty curious to read this. I think the cast was somehow interesting, particularly for the use of some famous and great French actors such as Michel Piccoli and Philippe Noiret. The story didn't really grabbed my attention, but it probably because it just wasn't presented in the right way. However, what I really liked about this film is the score composed by Maurice Jarre.