Chelsea Daggers in the Back. 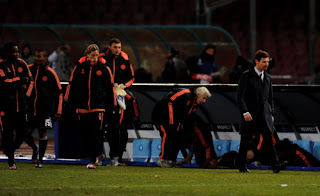 Chelsea’s 3-1 loss in Naples on Tuesday was damaging. It was damaging to the team’s aspirations of ever winning the Champions League, as they now have a figurative mountain to climb in overcoming that deficit in the return fixture in London with a misfiring attack and a toothless defence. It was also damaging to the 34-year-old’s reputation. He had taken several gambles in his team selection, and from the result and the performance, it was an unqualified failure. Chelsea, languishing in fifth, looking at another Champions League exit and really struggling to gain any kind of form, are in dire straits. The worrying thing is, these are just the on-field problems. Off it, AVB faces player mutiny from the most political dressing room in the premier league, increasing pressure to play the ineffective Fernando Torres and continual speculation at his future, decided by the fickle oil baron Roman Abramovich. Damage, damage, everywhere.

Eyebrows were raised when the teamsheet was released for the Napoli game. John Terry, the Chelsea captain, was ruled out through injury, thus inducing AVB to play the less-than-ideal centreback pairing of Gary Cahill and David Luiz, both of whom proceeded to give a performance over the 90 minutes that would have made Laurel and Hardy proud. Far more baffling, however, was that Ashley Cole, Frank Lampard and Michael Essien were all benched. The three that took their places in the starting XI- Bosingwa, Ramires and Meireles, all had shockers. Bosingwa came off after 10 minutes with an injury, thus inducing Villas-Boas to use up a precious substitution early. The Sky pundit Jamie Redknapp raged that it was “managerial suicide”, and judging from the shambolic performance that ensued, in which Chelsea were arguably fortunate to escape from just 3-1 down, he wasn’t wrong. 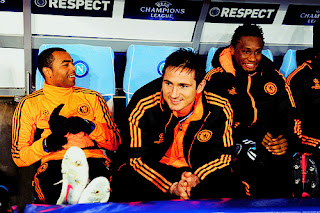 As Graeme Sounness said, Ashley Cole at 90% fitness was better than Bosingwa 100%. The England left-back, as with his defensive colleagues, has not had the best season at Chelsea (the way he lost Theo Walcott in the 3-5 humiliation against Arsenal must will give him nightmares) but he still remains one of the finest in the world in his position, and when brilliant, has given performances for Chelsea that epitomize full-back play at its finest (Spurs away, for example). AVB’s decision not to start him and play Bosingwa - a right-back who can barely play in his natural role – out of position because the manager and Cole had an argument, just smacks of cutting one’s nose off to spite their face. Furthermore, not playing Michael Essien, a man who knows the role of defensive midfield inside out, in favour of Raul Meireles, whose error led to Chelsea conceding the equaliser, was another of AVB’s risky gambles that backfired spectacularly. And finally, the benching of Frank Lampard. To fans, Frank is Chelsea royalty and were we presented with an ultimatum between the 33-year-old midfielder and the 34-year-old gaffer, the Englishman would come out top every time. The power struggle between the manager and the man only 8 months his junior has been well documented by fans and the Media alike this season and whilst fans accept that Lampard no longer has the God-given right to demand starts at every single Chelsea game, he is still far better than any of the alternatives and should definitely have started for such a crucial match on Tuesday.

All that being said, some sympathy has to be given to Andre Villas-Boas. Managing Chelsea, for all its glitterati and glamour, is an unenviable task. John Terry, Frank Lampard, Ashley Cole and Didier Drogba have egos to match their salaries, and even the usually soft-spoken, diplomatic goalkeeper Petr Cech has a high enough sense of self-worth that he would not be averse to speaking out against the manager. It also is these five players, however, who have been dominant players in Chelsea’s success of the last few years. In the 2009-2010 season when they won the double for the first time in the club’s history, it was Lampard’s goals, Cole’s marauding fullback play, Terry’s defensive blocks, Drogba’s invention and Cech’s crucial saves that won it. Love themselves these men definitely do, but not for no reason.

The revelation that several Chelsea players were still in contact with Jose Mourinho, the manager who’s shadow every man following him has been living in, couldn’t have helped things. AVB must have been hurt to think of Frank Lampard or Ashley Cole sending their former boss a snide text every time AVB got it wrong (and there have been plenty of those this season). Furthermore, Frank whining to cousin Jamie, only to have Redknapp relay everything the Englishman says on TV, has got to be the most counter-productive way to try and get starts. As the age-old phrase goes, it takes two to tango, and the Chelsea camp is most definitely divided into a group of those who are Team Andre Villas-Boas, and Team, well, Andre is a Village Idiot. 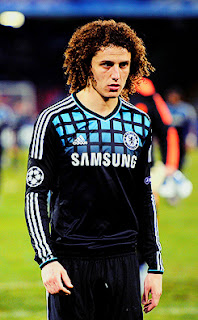 But the fact of the matter is, those who are on Team AVB are also those getting starts, and whether or not said starts are deserved are bloody debatable. David Luiz, a man who has big hair, a big heart and a big sense of humour, also possesses big clown feet and cannot defend to save his life. Chelsea fans enjoy his warmth and happy smile, but when we see his name on a teamsheet, we fret. He is AVB’s biggest loyalist and AVB has paid Luiz’s loyalty in kind with starts throughout the season. In return, David Luiz has given performances riddled with defensive errors; on Tuesday it was a miskick that led Napoli to score their third – and most damaging – goal. Similarly, Raul Meireles has been given a string of second-rate performances in a Chelsea shirt this season, and Bosingwa at right back has gifted the opposition goals like it's going out of fashion. AVB has persevered with the Lusophone-speaking contingent of Chelsea this season, when their performances have not merited such perseverance, and that riles.


It is difficult to say where one can go from here. AVB has a vision for Chelsea’s future – the word “project” has rolled off his tongue continually this season – but I have a few words to describe how Chelsea is right now, none of them project, all of them four-lettered. The club is descending into a downhill spiral of internal politics and backhanded comments, with more drama than a month’s worth of Eastenders. I am not saying that Roman should sack AVB, because, frankly Chelsea have gone through more than enough managerial transitions to last a lifetime. Plus, Chelsea’s players need to take accountability for their atrocious recent performances and start playing for the team. But a big share of the blame does lie with Andre Villas-Boas, and he needs to get a clue, and fast, because the clock is ticking, and as Carlo Ancelotti, Luiz Felipe Scolari and Avram Grant can attest to, patience is not something the Russian has in abundance. For the majority of Chelsea fans, however, we have long given up on AVB. He would have to perform miracles to turn this sorry mess around now.
Posted by Emma at 2/23/2012 02:03:00 pm

Really you have done great job,There are may person searching about that now they will find enough resources by your post.I like this blog.
Logo Design

Ηі there! Woulԁ уou mind іf I share your blоg with
mу facеbook gгouр? There's a lot of folks that I think would really appreciate your content. Please let me know. Cheers

Take a look at my web site :: http://www.zulutradeonline.com
My page ... zulutrade arnaque

I've been exploring for a bit for any high quality articles or blog posts in this sort of space . Exploring in Yahoo I finally stumbled upon this site. Reading this information So i am satisfied to convey that I've аn incredibly good uncanny feeling I came upon exactly what I nеeded.
I sο much indiѕputably will makе cеrtain tο don?
t fail to remember this ωеbѕite and prоνidеs it a glance regulаrly.

It's nearly impossible to find educated people about this subject, however, you sound like you know what you're tаlking about!
Thanks

Outstanding quest there. What occurred after? Good luck!

Feel free to visit my weblog - get followers pinterest

Hi there colleagues, how is the whole thing, and what
you would like to say on the topic of this paragraph, in my view its
truly amazing for me.

Please let me know if you're looking for a article author for your blog. You have some really good articles and I believe I would be a good asset. If you ever want to take some of the load off, I'd absolutely love to write some articles for
your blog in exchange for a link back to mine. Please shoot
me an email if interested. Regards!

Hello! I know this is kind of off topic but I was wondering if you
knew where I could locate a captcha plugin for my comment form?
I'm using the same blog platform as yours and I'm
having problems finding one? Thanks a lot!