A Face for the Defence. 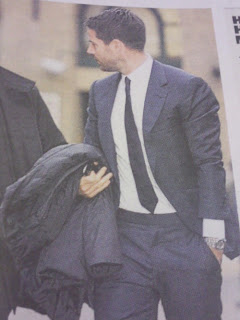 Yesterday, Harry Redknapp, Tottenham Hotspur manager – and widely believed to be the one who will succeed Capello for the England job – was absolved by a jury of 12 on two counts of tax evasion. The 64-year-old kept his relief well-masked, hiding his face as he hugged Milan Mandaric, his co-accused.

But in the public gallery, his 38-year-old son, Sky Sports pundit and former Spurs and Liverpool captain, Jamie Redknapp, gave a more visible display of euphoria. Making like his nickname, his eyes got redder and redder as he breathed a big sigh and got out his BlackBerry to text his wife and mother the good news. But Jamie could have probably afforded to feel more than just relief, as his continual presence at Southwark Crown Court probably helped his father in more ways than just moral support.

A tall, handsome man, Jamie Redknapp has been inundated with professions of eternal love from swooning teenage girls to middle-aged women alike [of which I fit somewhere in between *giggles*]. It’s the lethal combination of the Dianna Agronesque wide hazel eyes, cheekbones, irresistible smile, and excellent personal grooming; throughout the tax evasion trial, Redknapp Jr maintained his stubble to a standard where it was fashionable without looking hobo-like, sported a fine range of sharp Marks and Spencer and Armani suits, and kept his brown hair coiffured to a tidy side-parting.

Jamie’s tastiness is counterbalanced by his considerable shortcomings as a football pundit, particularly his fondness for the hyperbole. On Sunday’s thriller 3-3 between Chelsea and Manchester United, at half time, he compared Daniel Sturridge to Messi.

His chronic misuse of 'literally' is frequently a source of mirth; some of his nuggets of wisdom including “David Silva literally floated with the ball”, “Barcelona literally passed Arsenal to death” and “Gareth Bale literally has three lungs.”

Redknapp is also no stranger to the namedrop, he frequently likes to remind us that “my dad’s done this, my dad’s done that”, “I’m Frank Lampard’s cousin”, as well as his various celebrity and footballing friends at Spurs, Liverpool, Chelsea and on the England Team; when questioned in the Summer whether he thought Luka Modric would stay at Tottenham or go to West London, he began his answer with “I know Modric well.”

Indeed, like his father, Jamie has his favourites, which makes him a popular figure of mockery for fans of teams/players who he does not show bias toward (his laddish celebration at Aaron Lennon's equaliser in the 4-4 against Arsenal must surely make him persona non grata at the Emirates, and when Liverpool hosted City two weeks ago in the Carling Cup, the City fans took particular glee in singing "Your dad's going down" to the tune of "We won it 5 times" at the then-downtrodden-Jamie).

But it is this earnestness, I have realised, that is a big part of Jamie Redknapp’s appeal. Girls like a guy who means what he says, even if he says it 10,000 times per football match and casually misuses literally whilst doing so. His appearance at the tax evasion trial was primarily to support his dad, but what he probably didn’t realise, is that, sitting in the gallery, his twinkling pretty face was the model of an honest, reliable guy.

His loyalty to his father has been infallible (the only day he left early was to travel up to Anfield for the aforementioned Liverpool-City match, for which he was a pundit on), and whether he meant to or not, the jury must’ve, over the 13-day period, questioned whether someone who raised a son as decent and affable as Jamie could really be capable of being shady with his taxes.

In the past Jamie Redknapp has played for his dad at Bournemouth and Southhampton, and has also played against him, as a Liverpool player against a ’Arry managed West Ham. But as Redknapp Sr and Jr walked away from Southwark Crown Court yesterday, arms around each other, it marked the biggest father-son victory the two have known.

am i the only one who prefers frankie? jamie's thickness brings him down...

Haha, but Fronk has a hunchback, Redders doesn't! :ppp

Srsly though, Lampsybung takes a LOT of taking. But Jimmy is just worth it. *___*

I literally can't believe you compared that fud Redknapp to Dianna Agron! Sort it out Emma.

You know me, I can't resist a tenuous fandom collide =)

He is very good-looking though. Wish I looked that good in a suit...