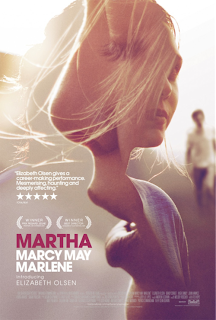 Martha (Elizabeth Olsen) has just escaped from a dangerous, abusive cult, run by evil but charismatic Patrick (John Hawkes). She is rescued by her sister, who is now happily married, and she is all too happy to facilitate her younger sister into her life, feeling guilty for times when she has not fulfilled her siblingly duties in the past. However, it is not as simple as just shaking off the past, and Martha is repeatedly plagued by visions of her past two years spent in the cult, under the name Marcy May.
Director Sean Durkin wanted an unknown actress for the eponymous lead, and held open auditions, before Elizabeth Olsen won the part. And indeed, I have never watched a film with her in, thus marking her introduction into the film world. But naturally, her surname precedes her; she is of course the baby sister of the Olsen twins, who went from twin sensation-come-television producers to notorious for their off-stage antics. Although I grew up with shows such as Two of a Kind and So Little Time and enjoyed the Olsen twins’ charm, I was never that bowled over by their acting style, finding them somewhat gimmicky. Elizabeth Olsen in Martha Marcy May Marlene, however, is no such thing. She is chillingly natural and lifts a difficult role into a sensational performance. Her Martha is an inscrutable character, and drifts from ordeal to ordeal without complaint. You watch as she is drawn into the cult leader Patrick’s beliefs and becomes brainwashed by the cult, hypnotized. Elizabeth Olsen commands every scene she is in, but the mastery is that she does not over or underact, judge or offer empathy towards what is clearly a very damaged character, she just lets the script and Martha’s persona do the talking.

The supporting cast are also very good, Sarah Paulson (who, ironically, made a TV appearance herself as Lynette’s hippy sister in Desperate Housewives) conveying her sisterly warmth, as well as the times when Martha’s infuriating behaviour drive her to want to be the polar opposite, and Hugh Dancy, though not given much to do as Martha’s long-suffering brother-in-law, is perfectly fine. John Hawkes, playing essentially the “villain” of the piece, gives another fantastic turn. Funnily enough, I felt the same vibe from Martha Marcy May Marlene as I did from Winter’s Bone, a film he was in in the previous year. Both are cold viewing appearances, without grand budgets or sets and glued together by the lead female (in Winter’s Bone’s case, Jennifer Lawrence was the star). John Hawkes’ character is threatening and a thoroughly unpleasant guy, but watching the clever way he changes his tune around the girls when he wants something from them, making them feel special, it is easy to see how an impressionable young girl could fall for his ugly charm. 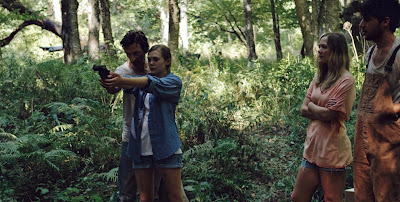 Martha Marcy May Marlene has been billed as a “psychological thriller”, but truth be told, there was nothing terribly psychological or terribly thrilling about it. Director Sean Durkin spends far too long on meandering, pseudo-avant garde scenes of rippling water and characters staring wistfully into space that feel like they’ve been directly lifted out of a “how to make an arthouse film” book. That being said, he deserves credit for certain scenes in the film, which are undoubtedly disturbing, without ever being graphic; the power of the content is in the actors’ facial expressions rather than the violence being inflicted on them. Overall, it isn’t an easy film to like, and that I didn’t, but as a star-making picture for Elizabeth Olsen, it has succeeded resoundingly. Olsen really is a fantastic actress, with a rare quality of holding your attention without even trying. If she stays off the beaten track that her sisters went down, she is surely destined for great things, and an Oscar, before she turns 30.
Grade: C+/B-
Posted by Emma at 2/09/2012 10:44:00 am

Hi, I stumbled upon your blog while looking for other people´s thoughts on this hauntingly chilling film and I really like your reviews! :)

I agree with pretty much everything you said about Martha Marcy May Marlene, except that I thought that it was a pretty insightfool look into the feelings and thoughts of someone who experinced what Martha did. Psychological enough for me, at least. :)

And as you, I was totally surprised when I found out that the lead actress is the little sister of the Olsen twins because she was really wonderful. Who would have thought!:D

Anyways, nice review.
Bye, Martha
(And that is indeed really my name.:D)

Hi Martha, that is such a sweet comment from you! <3

Glad you enjoyed reading. Elizabeth Olsen really is a star!!