Review of the Songs on the “Heart” (S3E13) episode of Glee

In order they were performed in the show...


01. L-O-V-E performed by Mike and Tina It’s always a novelty to hear Harry Shum, Jr sing, and he sings surprisingly well. Jenna Ushkowitz, who is often sidelined by other louder members of the Glee cast, has a terrific quality to her voice and their two voices complement each other perfectly, buoyed by some snappy Fred-and-Gingeresque dance moves as well as hilarious cut-aways to Rory and Artie competing for Sugar’s affections by trying to best each other at giving her tacky Valentines’ presents.

I particularly liked it when Tina whipped up a paper heart magically and incorporated it into the dance. A-

02. Let Me Love You performed by Artie

Rory tells Artie, “this is a four leaf clover. You’re going to need all the luck you can get”, and this was Artie’s pretty underwhelming respite. I was never a big fan of the Mario original, and Artie’s attempt to “boy band” it up to serenade Sugar just felt a bit flat.

Harry Shum Jr was comfortably the best of all the back-up dancers, and truth be told, I was more interested in his moves and sharp turquoise cardigan than I was in Artie’s singing. D

The God Squad this week were joined by a new face, a Joe Hart (not the footballer, lamentably, but lol at the coincidence), who Quinn describes as “a modern day Jesus”. He has a nice voice, and it is complemented well with Mercedes singing falsetto. I liked the incorporation of 'Trouty' in the rapping!

Halfway through the performance the song is lifted with a gospel vibe, which many felt a bit much for Gym Class Heroes, but I thought it was adorable, and an appropriately ~magnificent~ performance as it was a singing telegram for Rachel Berry, who herself is no stranger to the spectacle.  The background warbling during the refrain complemented the sweet lyrics well, too. A

Damian McGinty sang and acted well in his performance, and his soulful rendition of Buble’s moving song certainly didn’t lack the swoon factor, but he was rooted to the spot and that bored me somewhat. I practically have ADD, OK, I need a bit more in the way of visual pyrotechnics! C+

05. I Will Always Love You performed by Mercedes 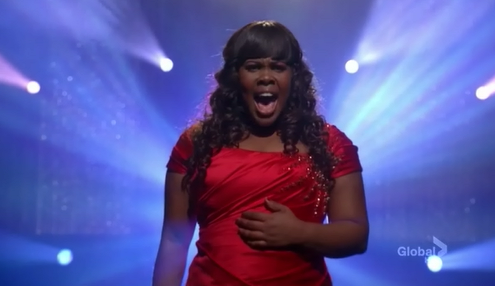 The showcase number of the show, as well an oddly prophetic song choice (R.I.P. Whitney Houston). Amber Riley’s acting during the performance is amazing – making us genuinely feel her dilemma, rather than before, when it’d seemed like somewhat of a first world problem that she had two potential suitors.

The lilting guitar in the background works perfectly to accompany Riley’s powerful vocals (when she hits the IIIIIIII, I got shivers) without detracting from her performance, which would have been quite some achievement even without the sad news of Whitney’s passing.

With it, though, it marks one of the most genuinely emotional performances amidst the peppy, superficial ones that we’re so used to in Glee. A/A+

06. Cherish performed by the God Squad 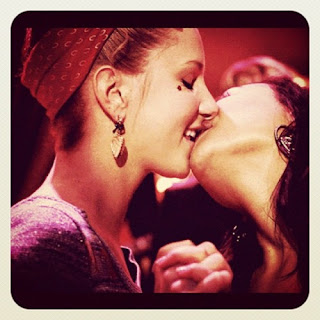 My girl Dianna Agron gets to take centre stage, and she has a voice to match her face; laced with honey. Her dulcet tones suit this cute number perfectly, and the many shots of Santana (looking beautiful) with her girl Brittany capture the schmaltzy, sweet side of Valentines Day. A-.


Blaine bungs up, “back from the dead”, as Sugar sensitively phrases it, to end this week’s Glee on a high, and a good chunk of Glee club also feature in his fun rendition of Love Shack. It’s very camp and karaoke, but Blaine’s vocals are always welcomed, and Kurt’s facial expressions when he does his lines are hilarious. B+
Posted by Emma at 2/15/2012 11:07:00 am

I read this post 2 times. It is very useful.

Let me show other source that may be good for community.